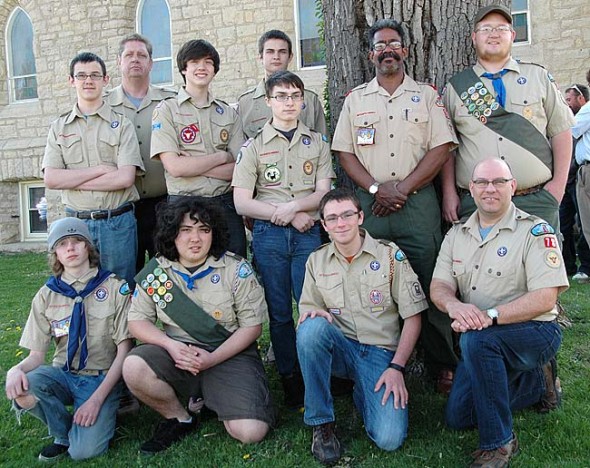 Former Yellow Springs Boy Scout Will McCuddy likes to tell the story of a camping trip at Sloan’s Cave in Cumberland, Ky., when he had to hike through water neck deep to get out alive. Former Scout Eamon Papania’s story is about the annual Camp Birch Klondike Derby, when he fell off a sled during a race and got dragged 20 yards through the snow. Casey Casenheiser remembers well the time that he led a camp­out near Wright Patterson Air Force Base, where one of his scouts got caught sneaking on base and woke Casenheiser up to the sight of an MP’s rifle barrel. On a recent day in May, about 30 current and former Boy Scouts of Yellow Springs Troop 78, ranging from teens to men in their 70s, gathered in the First Presbyterian Church basement to share memories of many decades of wilderness escapades. The stories told took place in various time periods but they all shared themes of brotherhood and personal growth. This year, as the local troop turns 75 and its home, Camp Hugh Taylor Birch, turns 80, the Scouts hope to continue and grow the group that began as a member of the Tecumseh Council Boy Scouts in 1939.

For Brian Mayer, a Boy Scout from 1995 to 2002, scouting is about camping, canoeing, baseball games and a bunch of photographic scenarios involving comic bodily injury, such as being launched off a fire escape. Or for Aaron Zaremsky, getting his life jacket caught on a branch which lifted him up out of his canoe as it was going by.

“I assume I actually fell in the river almost immediately, but I have a (most likely invented) memory of dangling there for a long time before finally extricating myself,” Zaremsky wrote in a recent email.

Current Scout Weymar Osborne knows scouting as a series of misadventures, including the time he got competitive and out-scarfed the fat greasy teenager gobbling next to him in a pie eating contest.

“I came in second place,” he said with satisfaction.

Scouting lives in Jake Kintner’s mind as a seven-day sailing trip around the Florida Keys with the Sea Base acquatic Boy Scout program. That’s where Robbie Marion remembers someone catching a barracuda with his bare hands — by accident.
“That trip stands out as something we all worked really hard to get the money for, and we went and did it,” Kintner said. “Getting out of Ohio and doing something as a troop — that’s what it was about.”

The Boy Scouts is an institution that means to challenge its members with adventures and skills young boys have never tried before and aren’t necessarily confident they can succeed at. As a scout master, McCuddy especially values challenges that promote personal growth.

“The thing I really like about taking scouts caving was you could see in their faces that they did something they didn’t think they could do,” he said.

The scouts perceive their accomplishments too, sometimes with activities their parents might have prohibited, which makes success even better. And they have fun getting down and dirty doing it. On one trip with leader Richard Zopf in southern Indiana, Marion recalls a particularly filthy trip boating through and spending the night in a cave.

“If you’re not muddy, you’re not having fun,” he said to nods around the room.

And if you’re not suffering at least a little, you’re probably still not having fun. Casenheiser recalls leading camporees with his scouts, including his children, 12 months out of the year on the Harold and Lucy Fogg farm north of the village. Those younger Casenheisers, now grown with children of their own, have a unique sense of what is “reasonable” weather for camping.

“Now when my kids ask me what’s the weather like over there and I tell them it’s 35 degrees and raining sideways, they say, ‘That’s camping weather, Pop!’”

Over the years the local troop has had success with fundraising activities in town, including running a local recycling center behind the former Grote’s ice cream stand (now Subway), and now parking cars during Street Fair on the Mills Lawn property. They use their funds to buy outdoor gear and support their campout events.

And the troop has had more than the average share of Eagle Scouts, those who by 18 have earned 21 merit badges indicating leadership and proficiency in areas such as citizenship, cooking, personal fitness and family life.

For all the benefits that scouting confers on a young person, local troop members confirmed that the activity has a lasting effect on them well beyond their youth. All his time spent with the Boy Scouts set McCuddy up for a lifetime of outdoor adventure, including work with the Cave Research Foundation, and the mountain and rock climbing and kayaking he still does. And he and others hope that local youth can see the value in continuing to engage in the outdoor, fraternal bonding that the Boy Scouts have afforded for so long here.

The local scouts plan to schedule a camporee this summer to commemorate their anniversary, as well as invite new members to join the adventures. Contact Troop leader Lake Miller at lakesphotos@sbcglobal.net for more information.