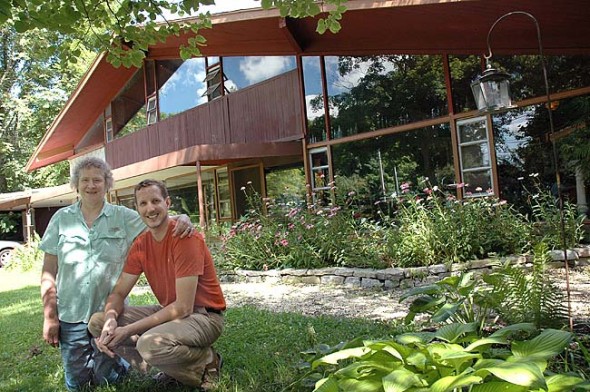 Local residents Martha Kline, Jack Kline’s daughter, and her son, Andrew, recently visited one of the best known Yellow Springs homes designed by Martha’s father. On Saturday, July 26, Turner Foundation historian Kevin Rose will lead an architectural tour of some of Kline’s local works, including Yellow Springs High School and the Vernet Ecological Center at Glen Helen. Due to popularity, this month’s bicycle tour will be followed by a second tour in September, at a date to be determined. Visit ­westcotthouse.org for details or to purchase tour tickets. (Photo by Lauren Heaton)

Perched on a cliff side in the woods on Old Mill Road sits a house made almost entirely of glass and so close to the trees that its designer and original owner, John L. (Jack) Kline, had only to reach out his window to touch the birds. Built around 1954 in a post war era of industrial growth and anti-socialism, the Kline homestead was made in the image of transparency itself and symbolized Jack and Betty Kline’s “openness to nature, openness to design and openness to the world and ideas around them,” Kline’s daughter Martha said in an interview last week.

That Jack Kline, a Springfield architect and one of the most prolific designers of public schools in Ohio at the time, chose for his home a spot between his city of employment and the liberal village of Yellow Springs, was no accident.

“They were staunch liberal Democrats — Mom was active in the Urban League Guild and the civil rights movement — and they were friends with a lot of professors at Wittenberg and people from Yellow Springs,” Martha said. “Springfield was more conservative, and it was their affinity with the liberalness of Yellow Springs that drew them here.”

Yellow Springs was home to many modern Springfield architects and their works in the 1950s, according to Kevin Rose, an historian with the Turner Foundation and founder of the Springfield Preservation Alliance.

As the creator of the 2014 Summer Tour Series on architecture and the history of Springfield and the surrounding region, Rose will lead a bike tour, “Jack Kline’s Yellow Springs,” focused on the residential and public spaces that Kline designed in the village. The event takes place on Saturday, July 26, and reservations are required to attend. Due to limited space and high demand, a second tour is planned for September, on a date to be determined. Rose has organized the tours through the Westcott Center for Architecture + Design with his wife, Marta Wojcik, director of the Westcott House Foundation. To sign up for the Kline tour or other events in the series, visit WestcottHouse.org or call the Westcott House Museum at 327-9291.

At the mid-point of the 20th century, Springfield was leaning on its financial success in the automotive and farming industries to become a leader in arts and architectural design, including buildings such as  the Victorian era’s Warder Public Library to Frank Lloyd Wright’s Westcott House.

“Springfield was a very successful industrial city and with that comes money, and with money comes the ability to hire great architects,” Rose said. Those artists then were drawn to the nexus of progressive thinkers just down the road.

“Yellow Springs was attractive to creative people,” he said.

Kline had come from South Dakota to the University of Cincinnati to study architecture and moved to Springfield to be near his wife’s family. He started out with the firm of Zeller and Hunter and in the mid-50s established his own firm with about a dozen draftsmen at his home on Old Mill Road. He designed several buildings such as the Clark County Courthouse, the Time Warner Cable building and at least five significant private residences in Springfield, as well as buildings, homes and dozens of schools and school additions in the region, including Yellow Springs High School, Greenon High School, Tecumseh, Northridge, Southeastern, Shawnee and Clark County Tech.

His style was heavily influenced by Frank Lloyd Wright, particularly Wright’s Usonian designs, according to both Martha Kline and Rose. But Kline also valued customizing spaces to fit the needs of individual clients, Martha said. With the schools, for instance, he read heavily on modern educational methods and designed buildings with open floor plans to accommodate the prevailing theories about multidisciplinary collaboration and team teaching.

“Both of my parents believed strongly in education, and Dad thought a lot about how architecture could support the modern classroom,” she said, adding, “I don’t know if the teaching was always practiced the way the buildings were intended to be used.”

Now, half a century after Kline’s schools were built, Hustead Elementary is being torn down and Greenon is looking to pass a bond issue for a new building. According to Martha’s son, Andrew Kline, architecture has become less affordable for the average person or business, which means there is a lot of construction going on without many visionaries to guide it. Perhaps that was always the case.

“Architecture has always been a professional service for the well-heeled,” Andrew said. “But perhaps less so then, because architecture has shrunk significantly from what it was as an industry in the ’50s.”

Though they may be 50 years old, many of the ideas and designs that Kline and his contemporaries aimed to achieve are still relevant and considered beautiful today. As president of Green Generation Building, a local design-build company, Andrew values the opportunity to create unique, fresh spaces with open plans.

“That’s something that was present in a lot of Granddad’s designs,” he said.

Kline grew up playing hide and seek in the glass house on Old Mill Road and visiting his grandfather’s studio, where he found “24 different kinds of pencils, ink pens, protractors, rulers and stencils spread out all over the table.”

“I’d go up to his office and spin around on those old steel stools watching him draft,” he said.

If Kline left an impression, Betty was equally persuasive. According to Andrew, when driving around their property looking for a spot to build their house, “Grandma suddenly said, ‘Stop! This is where I want to build my house.’ Granddad said, ‘But there’s no room between the road and the cliff.’ And grandma said, ‘Well, you’re the architect, figure it out.’” Having dropped out of college to marry Kline and then raising six children, Betty went to Wittenberg and got a masters to teach theater at Wilberforce. With Meredith and Willa Dallas she joined a Yellow Springs dream theater group, in which participants brought their dreams to life on stage. She was also in a Yellow Springs reader’s theater group in which friends such as the Denmans and the Battinos read plays aloud.

While the Kline’s homestead will not be on the bike tour, other homes with stories of their own will be, including the Marsh home on Livermore Street, a long, narrow Roman brick and one of Kline’s earliest Yellow Springs works, the Brucker “triangle” home across from Gaunt Park, and the Freeman home on Talus Drive. The tour will end at the Vernet Ecological Center at Glen Helen, which, according to Rose, was conceived by Yellow Springs industrial designer Read Viemeister but rendered by Kline.

Other modernist architects, such as Max Mercer, Roger Montgomery and Phil Snyder, produced work in Yellow Springs with similar styles. But according to Rose, Kline had a particular aesthetic that was warm and inviting, such as his love for clerestory windows, which make the roof appear to be floating, and his use of shapes as a fundamental design element in the triangle house. His sense of what was beautiful and his use of design to bring that beauty into people’s everyday lives changed the local perception of what architecture could be, Rose said.

“There are those who want to build something that changes the world, and there are those who want to create high quality, substantial work that impacts you, your neighbors and the local community. Jack Kline made a significant impact locally,” Rose said. “Yellow Springs has shown us you can do this — that middle class families can build something that’s extraordinary because it’s green, unique, beautiful and will be worth examining in the future.