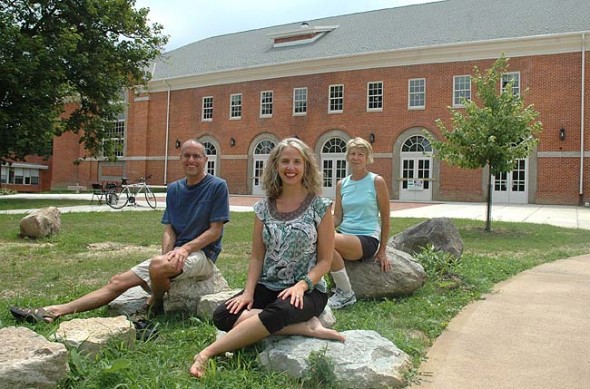 Antioch College launched a community fundraising campaign last week to raise $1 million towards the cost of renovating its new wellness center. Pictured in front of the $7.8 million center are Wellness Center Director Monica Hasek, center, and two of the 11 fundraising committee members, Franklin Halley and Donna Silvert. The center opens in September. (photo by Megan Bachman)

As an Antioch College student in the 1960s, Malte von Matthiessen played basketball pick-up games in Curl Gymnasium with Yellow Springs High School students. Back then, the facility was “just a gym” but still gave Antioch students a chance to play intramural sports and meet locals. This town-gown relationship will get a new boost when a newly-renovated wellness center opens at the former Curl Gym in September, with its expanded focus on health and wellness rather than just sports.

“Back then there was no Pilates,” von Matthiessen said.

Local resident and competitive swimmer Franklin Halley would occasionally swim in the Curl Gym’s pool before Antioch temporarily closed in 2008, even with its grungy water, tardy lifeguards, odd hours and crumbling walls, since it “was a pool and was here.” Halley now looks forward to hosting practices of his Dayton adult swim team at the state-of-the-art facility’s competition-length swimming pool.

Not only are both villagers planning to become members of the new $7.8 million Antioch Wellness Center, they are also helping to lead a new drive to financially support it.

Last week, a $1 million community fundraising campaign was launched to cover some of the cost of renovating the 44,000-square-foot wellness center. Already $700,000 of the total has been raised, including $500,000 from an anonymous donor and the rest from members of the fundraising committee of which von Matthiessen and Halley are a part.

Halley, a psychiatrist who has lived in Yellow Springs for 20 years, said he was motivated to join the campaign because the center will improve the fitness level of villagers and is a rare asset for a community like Yellow Springs.

“To live in this small of a town and have this kind of facility is an amazing thing,” Halley said.

To von Matthiessen, the Antioch Wellness Center will deliver many benefits to the college and community; it will help the revived college recruit and retain students, promote intergenerational mingling, and enhance Yellow Springs’ already established “platform committed to wellness, good health and exercise,” he said.
While Antioch hopes villagers join as members to pay for the facility’s ongoing operation, an additional financial contribution will help the college defray its upfront capital costs, which Antioch is financing by taking out a loan against its endowment, committee members said.

“The community needs to say we appreciate the fact that the college has put in $7.8 million, and we as the community can put in $1 million — that is a powerful statement,” said von Matthiessen, who gave a six-figure gift to the center with his wife, Pam.

Built in 1929, the facility was last renovated in 1964, while von Matthiessen was a student.

Villagers can donate online at wellnesscenter.antiochcollege.org or by calling von Matthiessen at 937-657-3676, emailing him at mvmysi@gmail.com or contacting Antioch Wellness Center director Monica Hasek at 937-319-6139.

Since Antioch has yet to purchase much of the facility’s equipment, donations received by the end of the year will be spent on everything from a lifeguard chair to yoga balls to reduce the amount the college has to finance. Other needs at the facility include treadmills, recumbent bikes, elliptical machines, dumbbells, tennis court resurfacing, swimming pool lane lines, handicap lifts and more, and donations can be earmarked for specific purchases.

A grand opening celebration of the wellness center is set for Sept. 6, with regular hours beginning on Sept. 8. Memberships go on sale in mid-August.

Donors who give at least $1,000 will receive an individual premium membership for one year, which includes unlimited fitness classes and is valued at $645, as well as their name on a brick on the patio in front of the facility. Those donating at least $2,500 will also get their name on a plaque inside the wellness center, while higher amounts come with naming opportunities. A gift of $25,000 gets a donor’s name on a racquetball or tennis court. Other naming opportunities are $35,000 for the visiting physician’s office, $75,000 for the rain garden, $1 million for the pool and $2.5 million for the entire facility.

As Hasek sees it, because the wellness center is a community asset that will benefit villagers, it makes sense that the college would ask for them to chip in for the center’s capital costs. The center is projected to operate at a deficit for several years with the expectation that about 800 people (including Antioch students, faculty, staff) will join the facility in its first year, Hasek said.
Hasek added that the new wellness center would attract more villagers to visit the Antioch campus, with benefits for both college students and locals — from babysitter connections to mentorships. Only the Antioch-owned Glen Helen Nature Preserve confers as many mutual benefits as the new wellness center, von Matthiessen noted.

“This will be a huge draw and huge reason for community members to come on campus, and when that happens we will probably come up with other ideas for interacting,” Hasek said.

Hasek is perhaps most excited that Yellow Springs finally has a single location where villagers can come together around healthy living. “Friends now meet over cocktails or coffee, but this is now a way to come together with a different theme and it’s a great example to set for our children,” Hasek said.

Membership rates released
The wellness center also released its membership rates last week, with rates ranging from $40 per month ($430 annually) for an individual standard pass to $90 per month ($970 annually) for a household premium plan that includes unlimited fitness classes, with significant discounts for seniors, alumni and those who volunteer at the center. All memberships provide access to the entire facility, including the pool, fitness center, indoor track, outdoor tennis courts, racquetball courts, volleyball and basketball courts and more.

According to Hasek, the rates were kept reasonable to encourage more participation, and donations to the center can help keep prices low. Financial gifts can also be earmarked for scholarships to discount fees to those who cannot afford a pass.

Hasek said the fees are on par with area YMCAs and gyms, though it was difficult to compare the wellness center since it is essentially a brand new facility with historical charm — not a big box store in a strip mall. The wellness center’s construction also included a focus on indoor air quality and environmental health, its pool will be one of the few in the area using UV filtration to reduce chlorine and the entire facility will be powered by the geothermal plant, Hasek said. Elsewhere, gym rats may feel guilty running on coal-powered treadmills.
“It’s easy to compare rates but it’s hard to compare facilities,” Hasek said. “It truly is a community asset, there is value to it and you can access it with a little more than $1 per day — the amount you pay on your cell phone bill for texting — and this is your health and wellness.”

A full breakdown of fees is available at wellnesscenter.antiochcollege.org.

Impact on wellness businesses
Another local constituency that could benefit directly from the new wellness center is local wellness practitioners, who will have access to potential clients and the use of a high-quality space, Hasek said. She has begun contacting local practitioners to gauge their interest in teaching fitness, martial arts and yoga classes, performing massage and other bodywork and giving lectures or workshops at the facility.

As the director and co-owner of Yoga Springs Studio (along with her husband, Yellow Springs News co-owner Robert Hasek), Hasek had been looking for ways to participate in the new wellness center. Six months ago Hasek began to downsize Yoga Springs, which she ran for 10 years, in anticipation of the competition from the center.

“When I heard the intention to be more than just a gym, to have a whole mind-body-spirit connection with quality yoga programs, martial arts and tai chi, that made me want to be involved even though I didn’t know what that was at the time,” said Hasek, who was hired as the director of the wellness center in May.

Because the Yoga Springs studio on Dayton Street was not ideal for yoga, in part because of its location in an old building without handicap access, and with the potential of a central wellness center to bring together practitioners in one space, Hasek decided to shut down Yoga Springs in Yellow Springs (the Springfield studio will remain open). The yoga studio closes on Aug. 31.

Hasek plans to teach yoga at the center, along with other local yoga instructors, she said.

Another wellness business to be affected by the Antioch Wellness Center is Curves Yellow Springs, which has been open since 2003. According to Curves owner Lynn Hardman, her gym for women, which serves about 100 members, filled a niche in the community for a fitness center when the Curl Gym declined and ultimately closed. Hardman said she believes that Curves Yellow Springs will likely not be able to compete when the Wellness Center opens, which is why she has been looking to relocate the franchise to Fairborn. Curves will be open at least through the end of August.

But Hardman doesn’t have hard feelings. In fact, she has been a key supporter of the wellness center, volunteering on several committees to conceptualize the facility and hire a director. She is currently a member of an advisory group.
“Nobody has advocated harder and longer for the Antioch College Wellness Center than I have,” said Hardman, who hopes to someday teach and coach at the facility after her non-compete clause at Curves expires. Hardman said she believes other wellness and fitness practitioners could see benefits as their relationship evolves with the center.

“There is a huge opportunity for folks who are fitness experts or experienced teachers and coaches for them to fit in,” Hardman said.