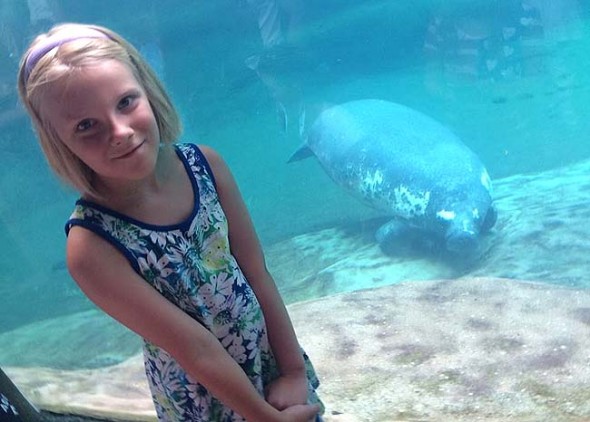 Mackenzie Horton, 9, recently asked friends and family to forego birthday gifts and instead make donations to help save manatees. She raised $160 so far and hopes to raise $200 by mid-August. Mackenzie is shown at the Columbus Zoo with her favorite marine mammal. (Submitted Photo)

A birthday wish for the manatees

Mackenzie Horton was ecstatic when she turned 9 years old in May and didn’t receive any birthday presents.

Instead Mackenzie received exactly what she wanted for her birthday — to help save an animal she loves, the Florida manatee.

After begging her mom for some time to create a website to raise money for the endangered aquatic mammal, Mackenzie raised the stakes as her birthday approached.
“I said ‘Mom — no presents. Just give me that website and that’s all I want,’” she recalled. “I already have so much … I just want the manatees to be safe.”
Later, at a pool party for friends at Gaunt Park, Mackenzie asked that they donate to her manatee fund instead of buying her gifts. At the sight of her friends bearing cards instead of wrapped gifts, she swelled with joy. It’s a choice she doesn’t regret.

“I feel fine [that I didn’t get presents],” Mackenzie said. “I get presents every single year. … It’s the animals that are really really hurting.”

Donations can be made at mackenziesmanateefund.weebly.com through Aug. 15, when Mackenzie will present a check to the Cincinnati Zoo in support of the Manatee Rescue & Rehabilitation Partnership, a program the zoo participates in which helps injured manatees recover before they are re-released into the wild.

A large aquatic relative of the elephant, the manatee is under threat from habitat destruction, red tides and poaching. But boat strikes are by the far the biggest peril they face — a hazard that broke Mackenzie’s heart when she laid eyes on the manatees for the first time at the Columbus Zoo.

Seeing white streaks on their bodies, Mackenzie was appalled to learn that they are scars from being hit by passing boats.

“I thought, that must hurt,” Mackenzie said. “These creatures are awesome and I don’t get how people can just zoom by and don’t even notice them.”

Manatees are especially vulnerable to boat strikes since they graze in shallow water and are known to be gentle and curious creatures. Also known as “sea cows,” the herbivorous manatees evolved 60 million years ago, can weigh up to 1,300 pounds and have been known to live up to 60 years.

Listed by the World Conservation Union as vulnerable to extinction, the Florida manatee was hunted for food as recently as 1950 with legal protections only beginning with the U.S. Endangered Species Act in 1973, according to the Defenders of Wildlife website. There are an estimated 3,000 to 5,000 Florida manatees in the wild and boat strikes kill about 100 per year, U.S. government figures show. According to a 2003 U.S. Geological Survey report, if boat mortality rates continue to increase as they have, the manatee won’t recover for at least 100 years.

Enter the U.S. Fish and Wildlife Service’s Manatee Rescue, Rehabilitation and Release Program, which rescues sick and injured manatees with the goal of returning them to the wild. The Cincinnati and Columbus Zoos are the only two facilities outside of Florida that are involved in the program as part of the Manatee Rescue & Rehabilitation Partnership. All donations to Mackenzie’s Manatee Fund, except for a small PayPal fee, will support that effort.

While Mackenzie said she is sad to see such a “ginormous creature in a tiny cage,” she understands that zoos can also help rehabilitate animals in support of conservation. In fact, last year the two local zoos released three manatees back into the wild and received several more that needed care.

Mackenzie’s love of animals extends to those living in zoos as well as her pet, a rescued Chihuahua named Snowy and the wild animals she encountered most recently at Glen Helen EcoCamp. When she grows up, Mackenzie hopes to be a zookeeper, a veteranarian, or to “travel the world to discover new species and help species from becoming extinct,” she said. She was thrilled to read in a Jane Goodall biography for kids that the primatologist dreamed of living with animals in Africa at an equally-young age of 10.

“I love animals,” Mackenzie said of her passion. “We’re really smart but in their own way they’re smarter than us. Even though they can’t do math, they do other things that we cannot.”

Her mother, Heather Horton, was equally shocked and impressed by her daughter’s choice of manatee donations over gifts.

“To surrender the self at such a young age at the birthday, which is such a big deal for them, and to want to include others in that — talk about impressed,” Horton said.

With the support of the eight friends who attended her birthday party, her seven-year-old sister Peyton, family members and villagers, Mackenzie has raised $160 so far with hopes of reaching $200 by mid-August.