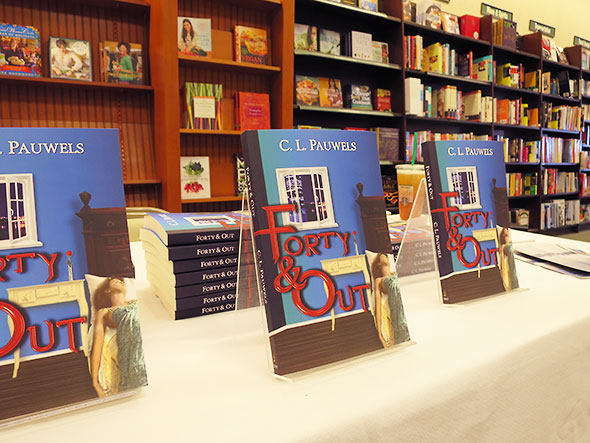 I arrive at the Beavercreek Barnes and Noble and walk to the center of the store. After greeting familiar faces, I take a sharp right-hand turn dead into the cooking section, my favorite in the book store. Surrounded by sumptuously bound prescriptions of ethnic foods and eating styles, I am not here in fact to feed my culinary fetish but indulge my first love of reading: the mystery novel. 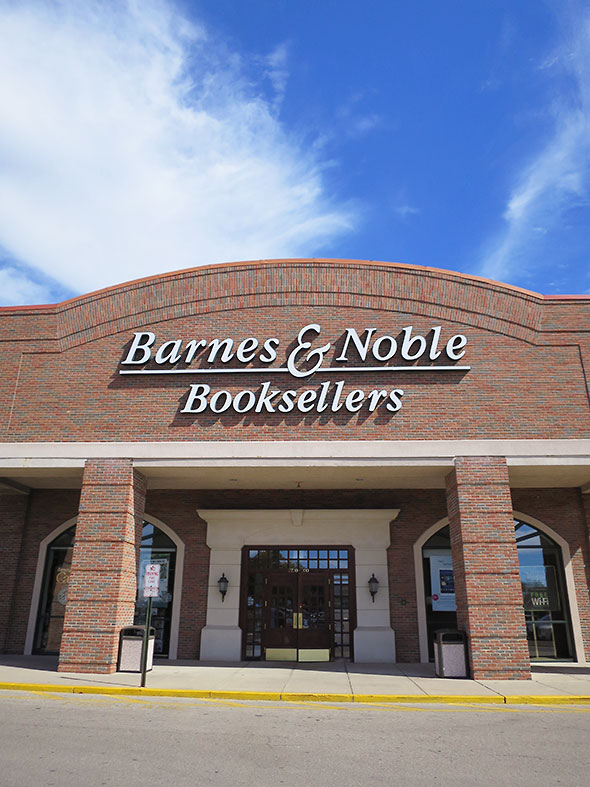 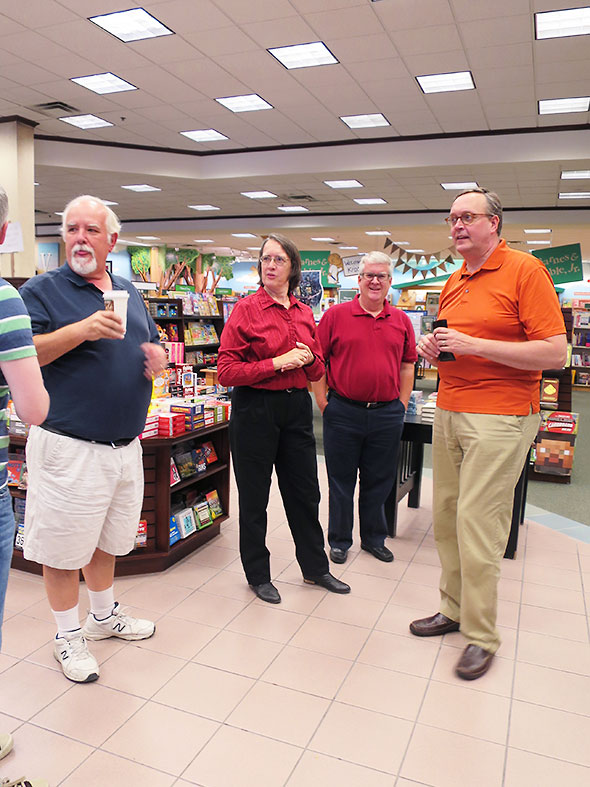 Before the sweeping presentation of cookbooks, I find a collection of chairs in front of a table covered in paper-white cloth. The table is stacked with several volumes of a freshly-print page burner expounding murder and treachery. I sit in the front row and wait in anticipation.

I am uncharacteristically early for a book reading by local author C.L. Pauwels. As the time of the reading approaches, the area fills with people: fans, family and fellow writers. Ten minutes before go, it becomes obvious that the five rows of folding chairs set up for the event will be inadequate to accommodate it. Pauwels and her husband nod in agreement knowing this problem is a good one to have. They inform the store staff who arrive with a heaping second helping of chairs. 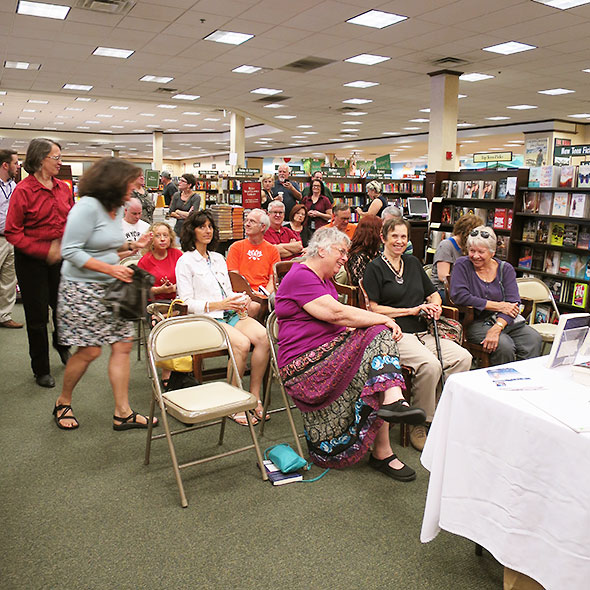 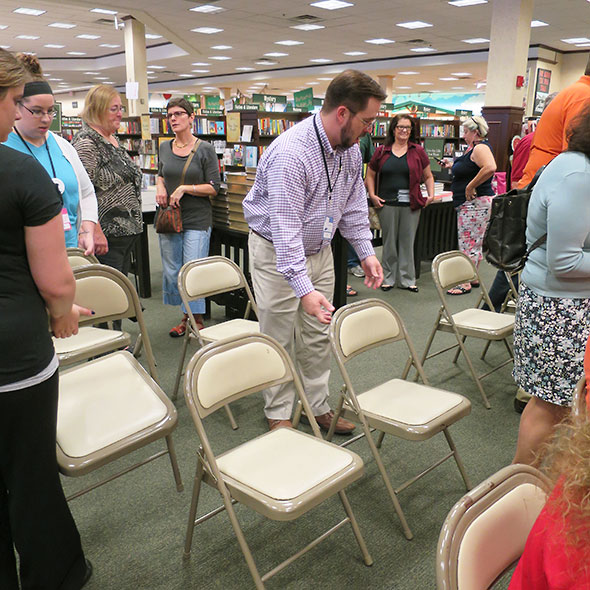 Known to her friends as Cyndi Pauwels, our mystery author takes the place of honor at the book table and acknowledges the crowd. After first thanking us for celebrating of the book’s release with her, she begins to tell her story. She writes mysteries from a place of deep experience. Pauwels spent over 15 years working in the criminal justice system, first, as a police/fire dispatcher and, then, as a deputy clerk in the Toledo Ohio federal court. Her crime novel is set in Toledo Ohio, and her participation in the city’s justice system shows on the page. Her deep family ties also turn up. Her meaty characters live and work in Toledo, churning in the emotional, ethnically-rich soup of the Northwest Ohio city. 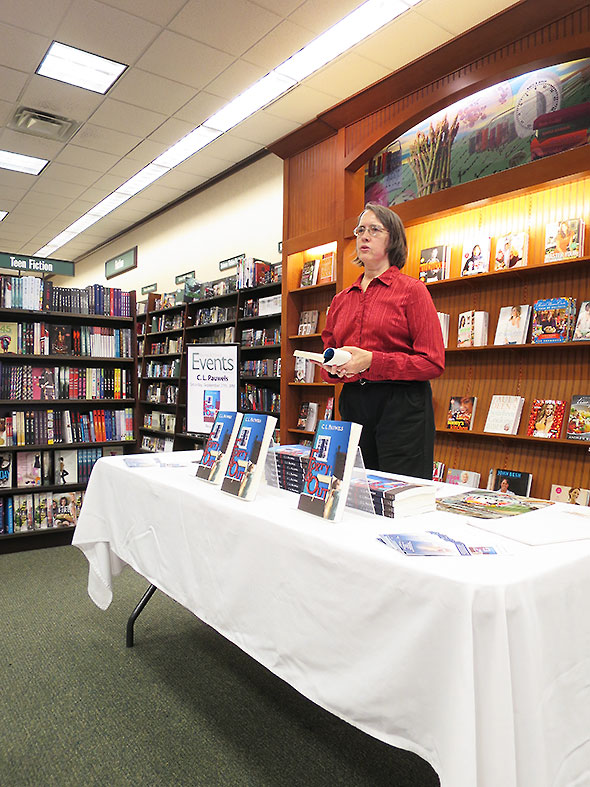 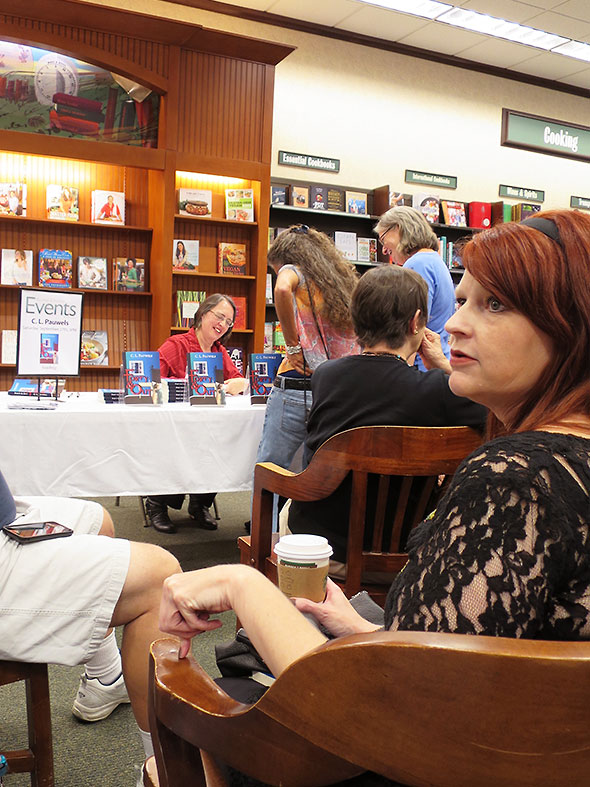 She tells us that she wrote much of the novel at this very Barnes and Noble in the company of her writers’ group whose membership includes Tami Absi, Jim Brooks, Lori Fetters Lopez, Randy Oerbeck, James Reynolds, and Diane Schultz. The idea first came to her as a short story. She fleshed the short form out into a full length novel during a 30-day sprint known as National Novel Writing Month. Participating in the national challenge issued every year since 2001, aspiring writers such as Pauwels attempt to compose a 50,000-word novel from scratch within the month of November. If you do the math, Pauwels tells us, that’s 1667 words a day for 30 days. Editing the novel to bring it to a publishable production was yet another Herculean effort for which she credits the steady guidance of her Tuesday writers’ group, the Antioch Writers Workshop, and Judge Bill and Sharon Hopkins of Deadly Writes Publishing, LLC. 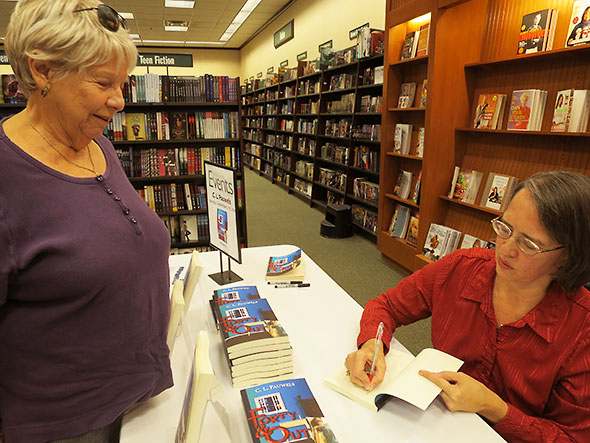 After reading three passages from the book and taking questions about the writing craft and the story telling, Pauwels takes a seat and signs copies of her novel. The book itself has a handsome cover. A room is painted the brilliant blue of dusk, trimmed at the base boards in a bright snow white. To the right, a woman in a green dress lies on a bed with an ornate headboard. Her eyes are wide open as if struck dead suddenly. The book’s title hovers above the murder scene in bold architectural letters the color of blood. Through an open window, you can glimpse the Toledo skyline. 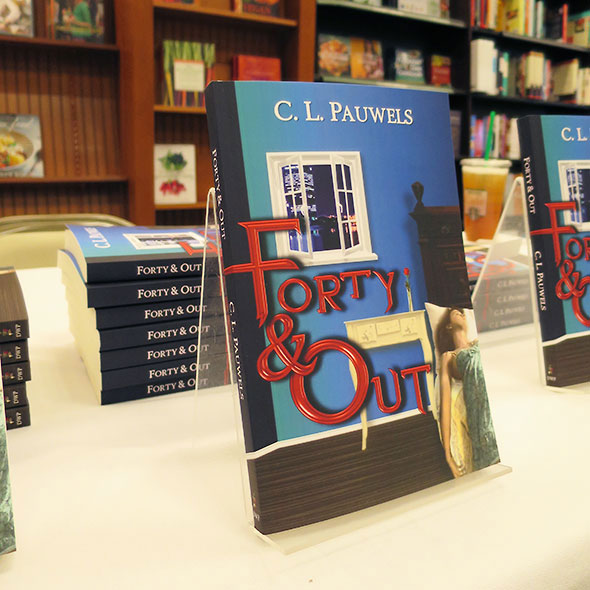 It’s that open window that makes you realize that you are standing in the main character’s point of view. There to investigate the scene, Homicide Detective Jadzinski’s frustration is palpable at the utter absence of clues in the clean swept room. Next to the body on the night stand, a bud rose signals a taunting salute from the woman’s killer as the murder weapon—poison gas from the apartment’s kitchen stove—slips out the window into the night air. Considering the scene, Detective “Jadz” comes to terms that, one, a serial killer has fermented a terrible scheme striking down vulnerable women on their fortieth birthday and that, two, the detective herself had better get cooking to keep others from succumbing.

Succumb to the temptations of a good mystery and join Cyndi Pauwels for a reading from her book 6:30pm Friday October 10, 2014 at the Epic Bookstore, 229 Xenia Avenue. Later this month, she will lead a kick off for National Novel Writing Month at Yellow Springs Public Library, 415 Xenia Avenue, on Tuesday, October 14, 2014 at 6:30pm. As a fan, I’ll be at both events eager to feed my literary hunger and its insatiable hunt for the tantalizing clever clue.