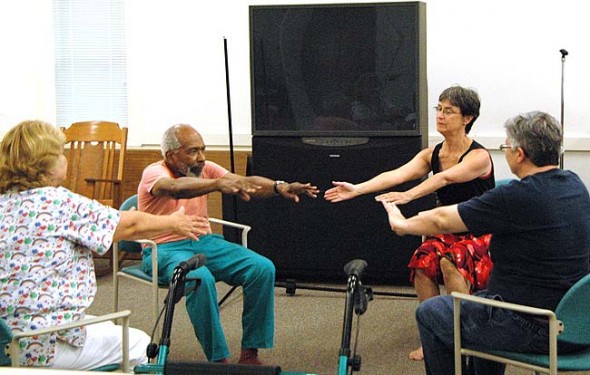 Each Wednesday at the Senior Center, dance instructor Jill Becker, third from left, works with Paul Graham, second from left, and Kim Korkan, right, who both suffer from Parkinson’s disease, a degenerative disorder of the central nervous system that causes gradual loss of muscular control and can lead to depression and dementia in its advanced stages. A regular regimen of exercise has been shown to strengthen muscles, improve mobility and have a positive effect on mood. (Photo by Jenn Wheeler)

Calling on dance to fight Parkinson’s

Every Wednesday afternoon at 2 p.m., Jill Becker, a local dance instructor who has taught at schools across the country, meets with a small group of people at the Yellow Springs Senior Center to lead a dance class intended to help participants manage the symptoms of Parkinson’s disease. The group works through a variety of movements, some intended to relax and some to energize the nervous system, all of which bring the dancers together to have fun.

For one exercise, the dancers imagine that they are a holding a paintbrush on the top of their head, mentally connecting the paintbrush to their spine as they slowly move the brush in concentric circles, relaxing their nervous system in the process. Becker said she also likes to include improvisation in the class, something she believes helps participants become more familiar with their body, how to move their bodies in ways that support their joints, improve coordination, and strengthen their muscles. During many of the exercises she gives the dancers loose instructions on the kinds of movements to use, which offers the dancers the chance to stretch themselves and become more aware of the connections between their thoughts and movements. The dancers have looks of deep concentration as they consider how to move next, but they’re clearly enjoying themselves in the process.

One of the participants in the class, Paul Graham, an Antioch College graduate who has lived in Yellow Springs for around 50 years, said that after these kinds of exercises he leaves the class feeling more energized, with his symptoms much less bothersome. He has been a part of the group for between two and three years, almost as long as it has existed, and it has become an important and fun part of his larger exercise regime. The class has been helpful enough that he found another one to attend in Berkley, where he and his wife spend their winters, and Graham said that the much larger class in Berkley has roughly the same structure as the class here, although here he especially appreciates having Becker as a teacher. He has also found the Yellow Springs class a good place to connect with people he would otherwise never have met.

“It can help to minimize some of the symptoms like depression, too,” he said.

The class loosely follows the model of the Dance for PD program, which was developed by the Mark Morris Dance Group in conjunction with a Parkinson’s support group in Brooklyn. According to their website, Dance for PD now has programs available all over the world, in over 100 communities. Becker trained with the dance group at at workshop in Indianapolis and also visited them in Brooklyn before coordinating with Corinne Pelzl at the Yellow Springs Senior Center and the Tri-state Parkinson’s Wellness Chapter in Cincinnati, the two sponsors for the Dancing with Parkinson’s group in Yellow Springs.

According to the National Parkinson Foundation any kind of exercise can be an important part of managing Parkinson’s disease, and regular dance can be particularly beneficial. Parkinson’s disease primarily affects the central nervous system, and the symptoms involve varying degrees of difficulty in motor control, tremors, and rigidity, all of which are addressed in one way or another by the practice of dance. Dancing can help all people to draw stronger connections between their mental processes and their movement, which can especially help those with Parkinson’s disease to become more aware of how they are affected and learn how to work with and around those effects.

“When people move musically with rhythms, they’re able to overcome some of the typical symptoms of Parkinson’s like rigidity or shaking,” said Becker.

For the most part the class Becker offers takes a form very similar to that of other dance exercise classes she teaches. They are more similar than different, she said. The kinds of exercises and activities the Dancing with Parkinson’s group do are the same kinds of exercises and activities that might be used in any dance class, and Becker modifies the particulars to suit the needs and experience of people in the class like she does with all her dance classes.

“The basic idea is that you do what you do and adapt it to the physical ability of the people who are in the class,” said Becker.

Her own training has focused on modern dance, so the activities she brings to the class vary widely in the types of movement involved and styles of accompanying music. This openness to variety allows the class to concentrate on a range of kinds of motions that address the specific needs of participants. Many of the exercises focus on strengthening muscles to improve balance and coordination, one of the most noticeable symptoms of Parkinson’s, and Becker said that she’s always sure to include some vocal exercises, since loss of vocal control can be one of the most frustrating symptoms. During their class the dancers rhythmically pass a beach ball back and forth with a partner, which both helps the dancers to connect with each other and to connect their movements to specific outcomes. They toss the ball across the circle and side-to-side, pairing with dancers opposite them and to their left and right to include motion across their whole bodies.

“Anything that integrates the hemispheres of the brain is good, so we do a lot of movement across the midline,” said Becker. “It’s important for people to follow their own way of moving.”

The National Parkinson Foundation’s website highlights that these dance classes give those with Parkinson’s a social space to connect with each other outside of the clinical settings in which they might otherwise meet, and Becker’s class is no exception. The class often begins with participants checking in with each other, sharing information ranging from changes in medication to more personal stories or exciting family developments.

This chance to socialize in a setting not dominated by doctors and medical equipment can help those with Parkinson’s disease to escape the feeling of isolation that Parkinson’s can lead to in many cases, according to the National Parkinson Foundation. They cite Olie Westheimer, organizer of the Brooklyn support group that collaborated with Mark Morris Dance Group to create Dance for PD, who noticed that a large number of people in her support group seemed to be suffering from depression, both people who had Parkinson’s disease and their caregivers.

Becker has led the Yellow Springs group for three years, the whole time it has existed, and it has varied in size over that time but mostly remained small. Currently there are three regular participants, and the class has an intimate but confortable feeling, although Becker said that she would be very excited for the class to grow and mentioned that caregivers who come are welcome to participate in the class as well. Those interested in attending can contact the Yellow Springs Senior Center for more information

After 45 minutes of movement and concentration, each class ends with the dancers forming a circle, turning to each other, and thanking those around them for sharing their time and energy, and everyone seems happy to have had the opportunity to participate.