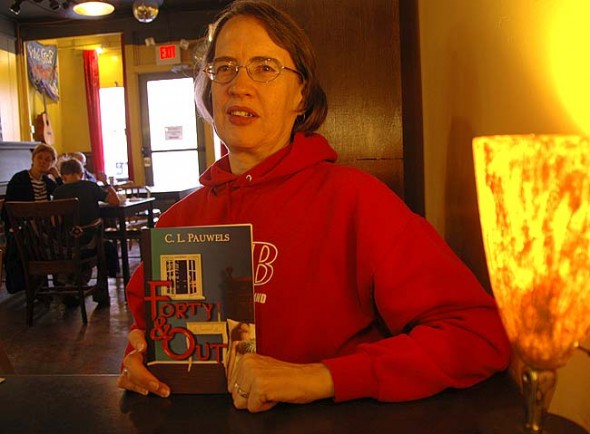 Crime author ferrets out her plots

A serial killer is murdering the single women of Toledo on their 40th birthday.

While the new crime mystery “Forty & Out” is based around a morbid concept, it’s really the story of the female detective out to find the killer while balancing police politics, a clingy almost-ex-husband and a family rift.

“It’s a story about redemption,” said local author Cyndi Pauwels this week. “She discovers more about herself as she gets closer to solving the case.”

Written under the name C.L. Pauwels, “Forty & Out” was published last month by Deadly Writes, a small press in Missouri.

Pauwels will read from her book at Epic Book Shop at 6:30 p.m. Friday, Oct. 10, and will present at the Yellow Springs Community Library to kick off National Novel Writing Month at 6:30 p.m. Tuesday, Oct. 14. The book is available for sale at Epic, Barnes & Noble and online at Amazon and through the publisher.

A lifelong writer, Pauwels is celebrating the publication of her first work of fiction. Previously, Pauwels wrote the non-fiction book “Historic Warren County” and has had her stories and essays published in various magazines and anthologies.

As a crime mystery writer, Pauwels draws on 15 years of experience working in the criminal justice system — first as a police dispatcher and later as a deputy in federal court — to understand the inner workings of a police department and how detectives solve cases.

“I take it for granted but I do understand the ways the officers think,” Pauwels said. “I also got some insight into the criminal mind hearing them testify.”

Pauwels uses her insider knowledge to bring authenticity to everything from the kind of gun her character would carry to the way officers talk to one another — calling each other by either a last name or nickname, for example.

“Forty & Out” was adapted from a short story Pauwels published in 1990 as “Happy Birthday to You” in Ohio–Michigan Line Magazine. She turned the short story into a novel draft during National Novel Writing Month in 2006. But after 39 rejections from publishers and without interest in the self-publishing route, Pauwels was about to give up when she learned of a start-up press focused on crime fiction. Deadly Writes immediately asked to read her manuscript and was so eager to publish her book that the publisher completed the process in six months so “Forty & Out” could be previewed at the Killer Nashville convention in August. There Pauwels sat on a panel with several of her author heroes unknowingly in the audience.

For Pauwels it has been a rewarding experience to see her words in print and receive so much positive feedback. At her book release at the Beavercreek Barnes & Noble last Saturday, only 10 chairs were initially set out (she was told author events are poorly attended), but more than 40 people came, and her book sold out quickly.

The journey has been a long one made all the easier with the support of fellow writers through a writing group that meets weekly at Wright State University, Pauwel said. In a life now devoted to writing, Pauwels is also a composition instructor at Clark State University and the assistant director of the Antioch Writers’ Workshop.

Pauwels said she is influenced by other mystery writers who write about female protagonists, including Sue Grafton and Sara Paretsky. About choosing a female protagonist, Pauwels joked: “There are plenty of male detectives out there.”

Of her writing style, Pauwels says she is praised for dialogue that sounds “natural and believable” and for description that “moves the story forward” while not using “description dumps” that can be distracting. Pauwels added that that is a typically female way of writing. Meanwhile, her brand of crime fiction is in the middle of a spectrum that runs from largely-female written “cozy mysteries” to largely-male written “hard-boiled thrillers.” While Pauwels’ book does have “some language” there are no bloody murder or graphic sex scenes, she said.

Pauwels is currently writing another police mystery, “My Brother, My Friend,” and polishing up the book she wrote as her undergraduate thesis for Antioch Midwest University — “Ties That Bind.” Together with “Forty & Out,” the three books comprise a trilogy of sorts, using many of the same characters.

At the same time, Pauwels is writing a story about a part-gypsy computer hacker set in Yellow Springs and Dayton. The story idea came to her when the voice of a strong female character came to her and said she needed to have her story told. Apparently the experience is not an anomaly — “Voices in your head are very real for fiction writers,” she says.

To Pauwels, writing is a “voyage of discovery” where she starts often with a character and general concept while letting the plot reveal itself to her through the process of writing. As opposed to a “plotter” she is a “pantster” since she writes “by the seat of her pants.”