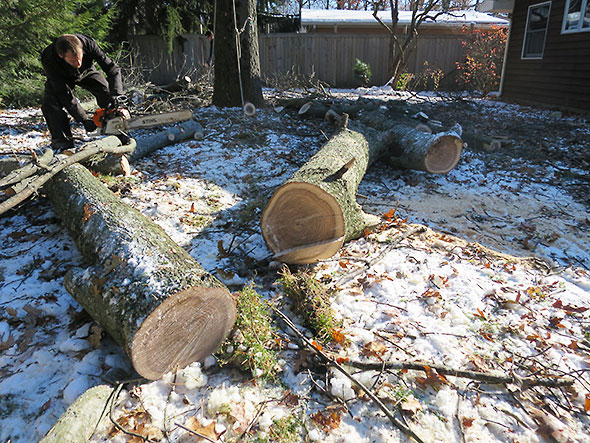 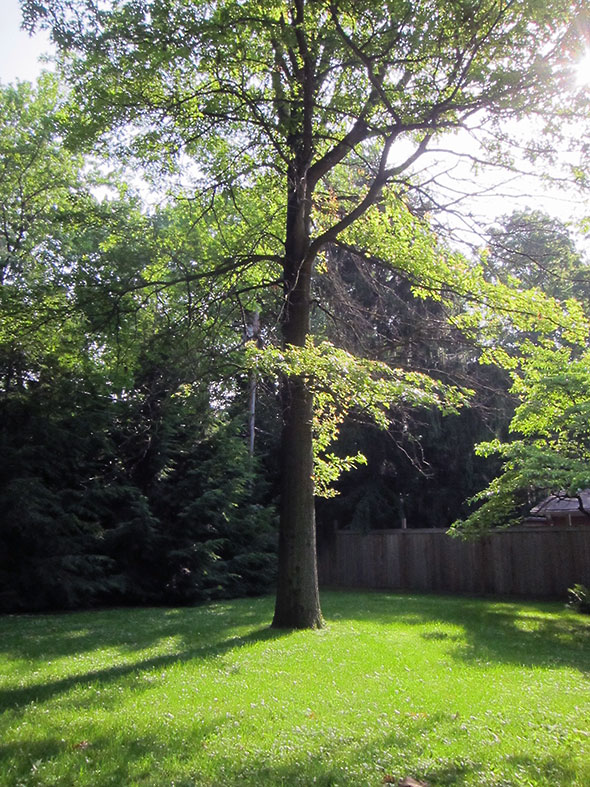 Pin oaks are lovely trees. They grow a fine straight trunk with branches that reach to the four corners of the world. They leaf out early in the spring and drop their leaves late in the fall. They are a rare tree in Yellow Springs. Our soil tends to be too alkaline for pin oaks. Despite this, our tree in the backyard flourished for its first 35 years. Then something happened. I can’t say for sure, but I suspect a common blight: root damage during a home construction project. If heavy equipment or stacks of material trespassed under a tree’s canopy, their weight will compress the soil and disrupt the flow of water and nutrients to the roots. The root system will die back in response and with it the overhead canopy that it feeds. Whatever occurred to our tree, subtle signs of distress—asymmetric growth in the tree canopy plus leaf discoloration and distorted tissue—told of the tree’s silent suffering and its slow dying.

Though struggling mightily when we first arrived at its base seven years ago, the pin oak appeared healthy. From the way our property is laid out, we almost always approach the tree from the southwest, an approach which presents the tree’s best side. In the winter of 2011, we began inspecting the overall property thoroughly and, once we did, the pin tree’s distress became apparent. The limbs on the tree’s north, west, and south side grew in a normal pattern, but the limbs to the east did not. Instead, they twisted south as if trying to reach around the tree. We inspected the tree again in the spring and noted that the twisted limbs remained bare or produced leaves highly susceptible to disease, heat, and drought. 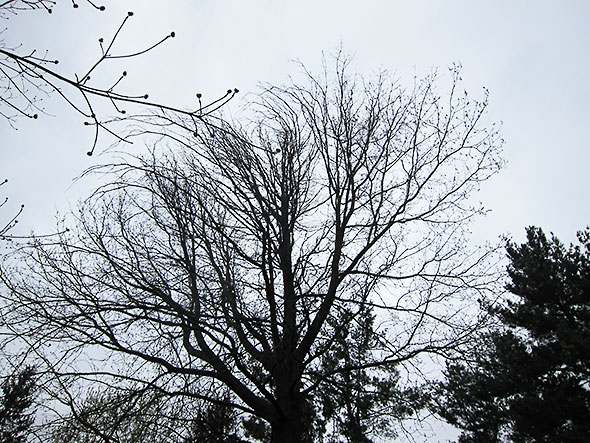 We called in arborists to inspect the tree, and the common prognosis was not good. The arborists noted that the central trunk was stunted in growth and also failing. In all, over a third of the tree was either dead or dying. We could have taken the tree down then and there, but the tree still seemed rather sound. Due to the stunted growth of the affected branches, no large limbs were failing and the tree had a dense green canopy for much of the year. We nursed the oak along and hoped for improvement. 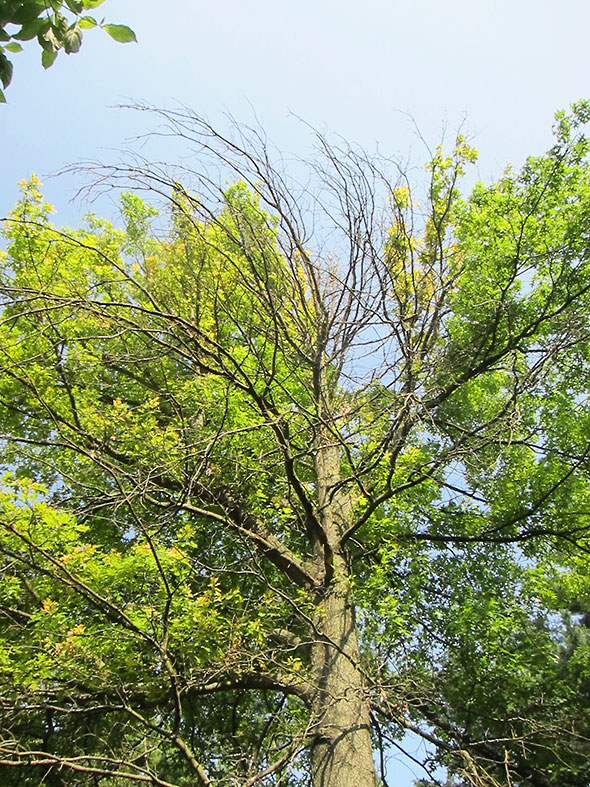 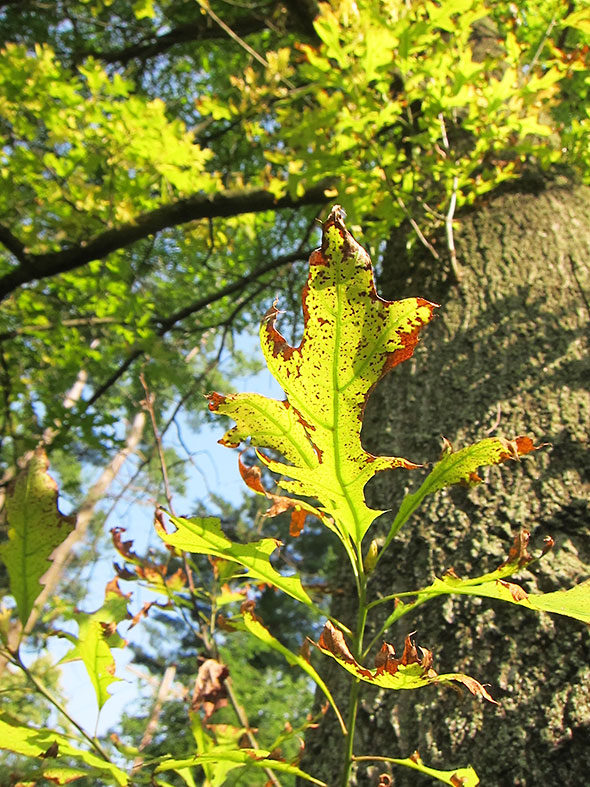 Then, in 2012, a great maple tree crushed the Big Toy at Mills Lawn, and a shift occurred in me. One side of the maple tree’s root system had failed in a great wind storm, and its massive tower of trunk and limbs fell toward the elementary school just missing its outer walls. Now I looked out my bedroom window to the pin oak that was slowly dying and traced the likely trajectory of its downward fall. My sleep grew uneasy. 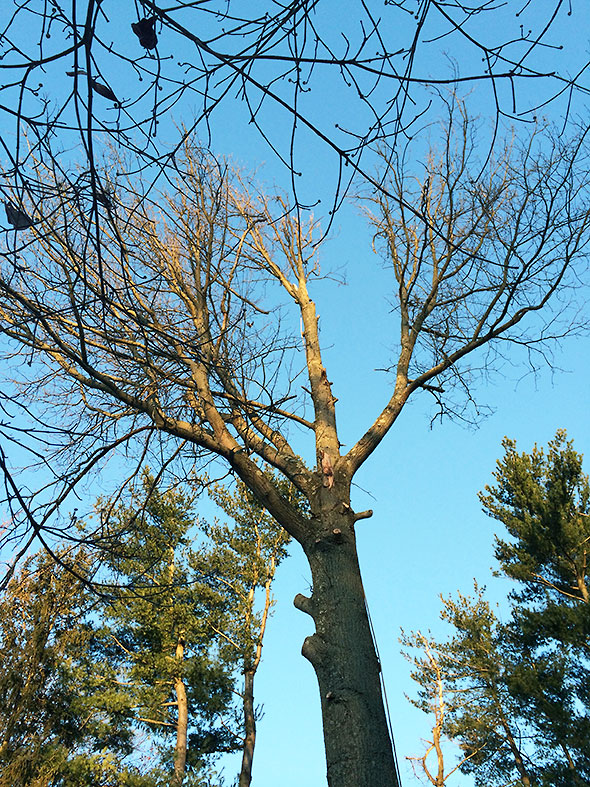 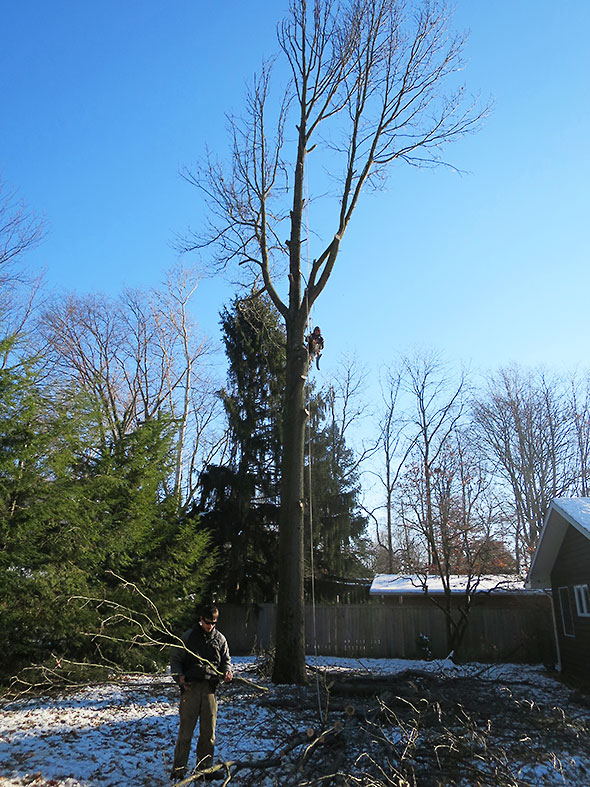 My uneasiness bloomed this year as large branches dropped from the failing tree, not just scarred leaves. The tree was no longer safe to sit beneath. My husband and I talked in earnest about removing the tree, but talking about taking a tree down and getting it taken down are two entirely different things. We have fine arborists in our area, but they are busy people. The emerald ash bore has reduced the area’s tree canopy by 30%, and several trees in public spaces must be removed to keep the ash trees from collapsing catastrophically. Besides the intense competition for tree removal, our situation had a further complication. Our pin oak is nested in our backyard unaccessible to cranes and heavy equipment, so we needed an arborist with a specialty at tree climbing. 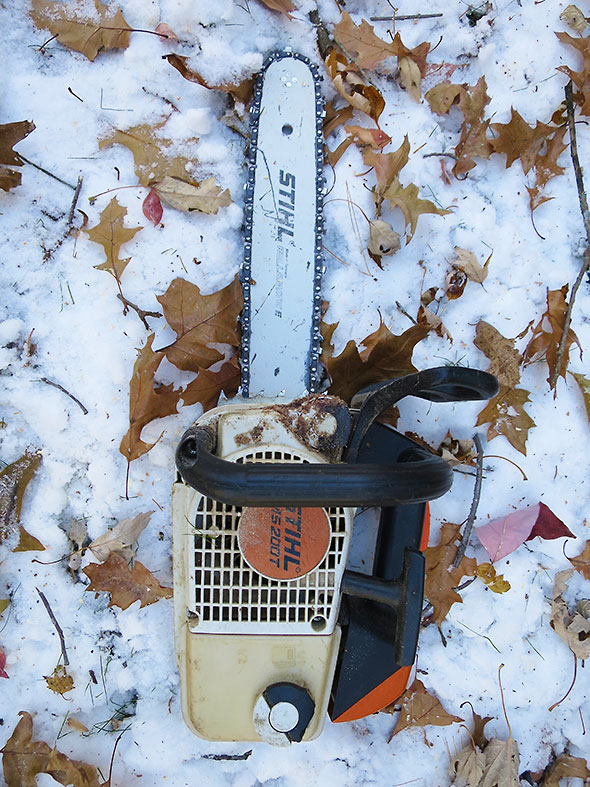 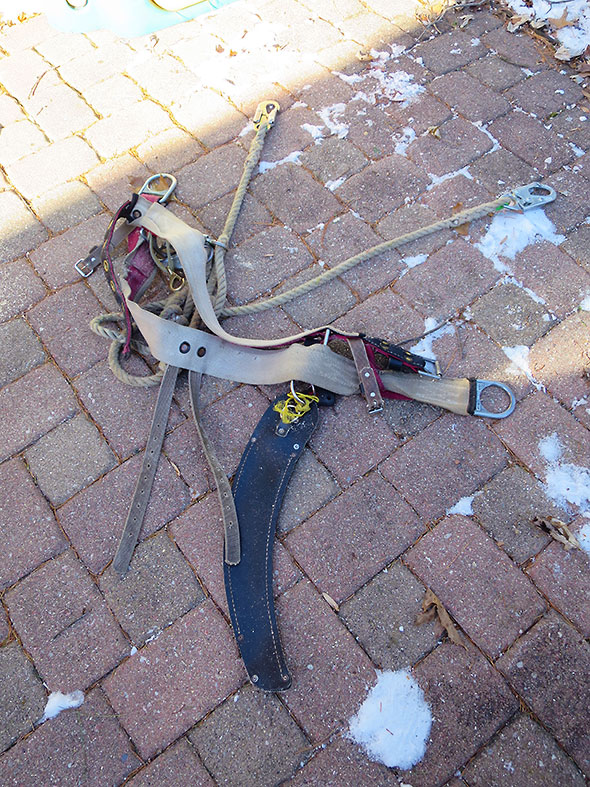 To our rescue came Basilio Lainez, (937)-219-5796, a noted local expert in the art of tree removal with climbing harness and chainsaw. Within a week of getting his contact information from a friend, he was at our house for an estimate of the work and at work with hours of our accepting his estimate. 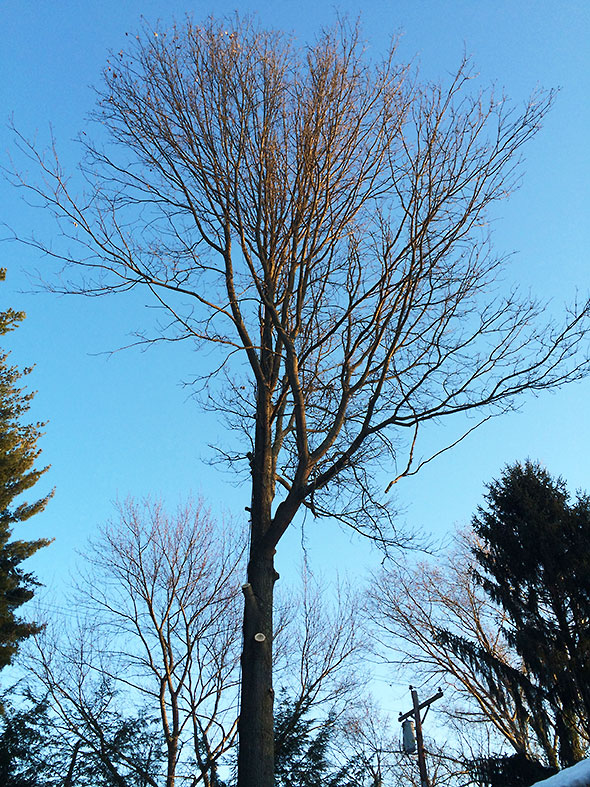 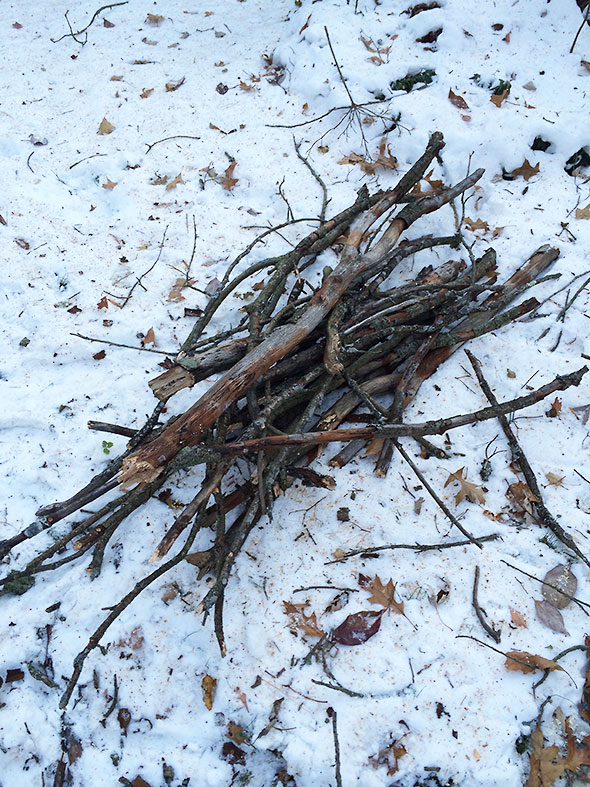 The process of removing the tree took two days. That first afternoon, Lainez scaled the tree to remove the damaged branches. I came out the morning after the first day’s work to commune with the pin oak one last time. I sighed looking up. As I took in what he had accomplished—thoroughly pruning the tree of its deadwood—my first reaction was regret that we had not met Lainez earlier. I still harbored a hope at saving our oak, I realized. Looking up again though, the poor health of the central tree top was apparent to my own eyes: the bark lifting off wood, its size diminutive compared with the living trunk below. The structure of remaining viable limbs looked fragile and spare. 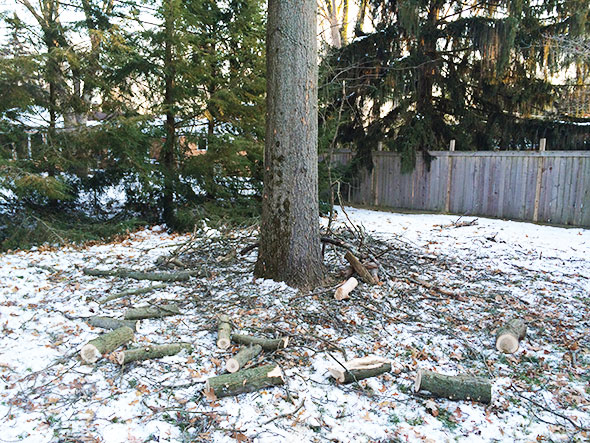 The ground below the tree was scattered with snow, sawdust, and fallen leaves. The downed limbs were the size of a thigh leg or smaller. Lainez’s crew arrived as I returned into the house to shepherd my daughter to school. When I returned from downtown, the crew was loading newly downed limbs onto a trailer bed. These limbs were notably straight and healthy unlike their misshapen brethren from the day before. 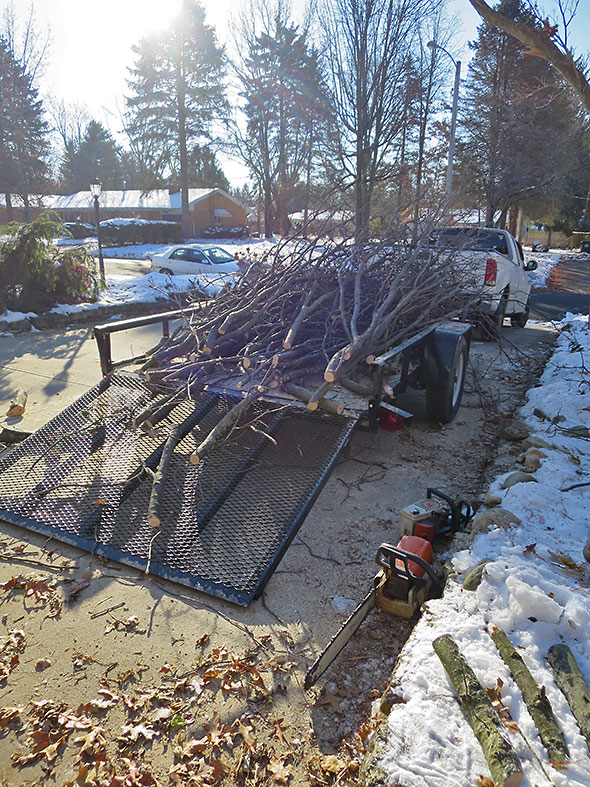 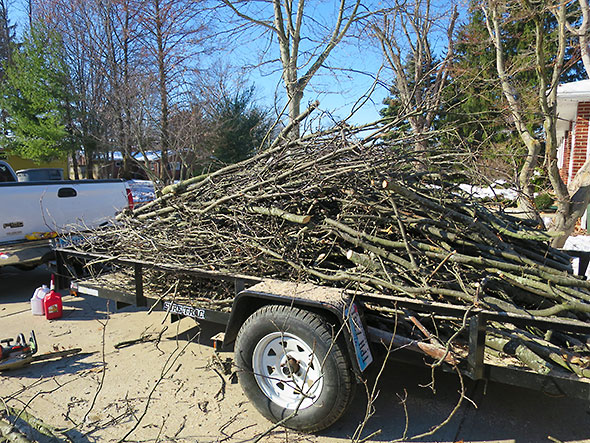 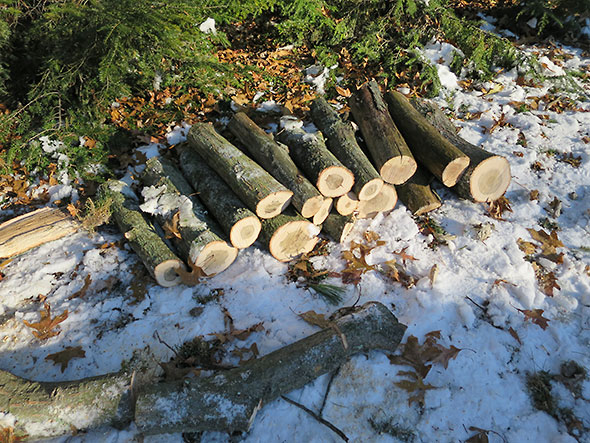 I split my time between watching the crew outside and my son indoors. My son was intent on his legos that morning building up his firetrucks, breaking them down, and building the vehicles anew. The sound of chainsaws outside did not tempt him away. Only later, when we could feel the impact of dropping tree trunks, did we both come outside to witness the dismantling of the pin oak. 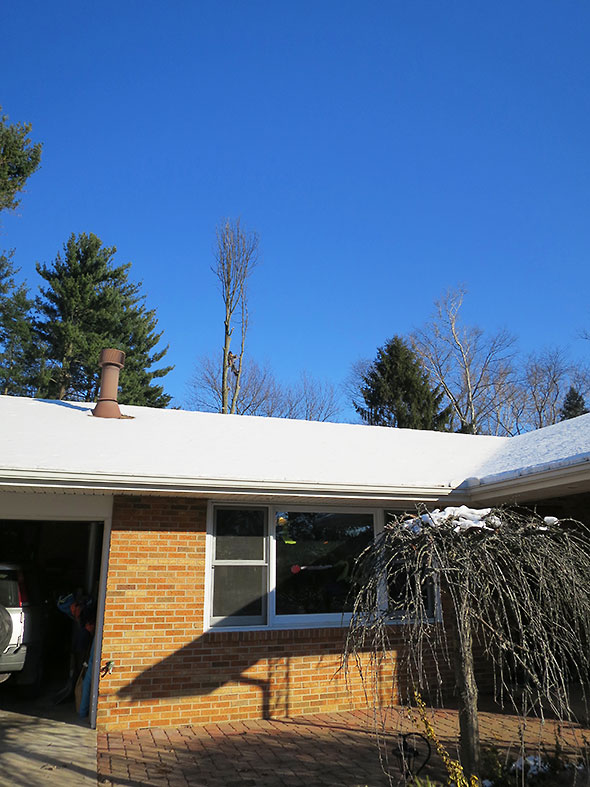 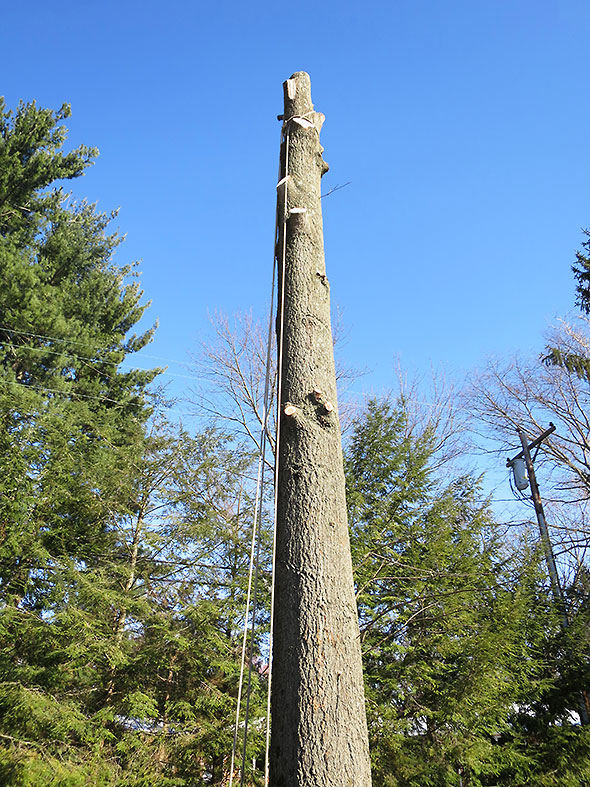 We stood off to the west of the oak tree which was looking more and more like a totem pole. Lainez hovered two stories above us moving about the tree with confidence and deliberation. After finishing a cut, he’d select a new perch among the sturdy joins of the tree and secure himself the oak’s few remaining masts. As the last great limbs hit the ground, they marred the lawn with their great weight. The weight of 1% of that tree was arresting and I thought to myself much better our lawn than our roof. My four year old looked on with an unblinking eye. My son seemed to approve of the work but then turned to me in earnest and said “They need to put the tree back together.” I told him with regret that was not possible. A tree is not a lego set but a living ever-growing creature.

After the work was complete and Lainez’s crew had stacked the sectioned logs in neat rows for later splitting and taken the smaller branches to Flying Mouse Farm for kindling, I sat down on the remaining tree stump and wondered what lay beneath. The lawn was tidy but for the scattering of snow and sawdust. The ground had heaved and recovered from the indentations made by the giant falling logs. My son’s words returned to me along with his instinct to reinstate the tree. I thought on how we might replace the troubled pin oak and learn from this failed chapter in tree husbandry. Perhaps we’ll find a more suitable native oak or plant a cutting from the great sycamore at Walnut Street and Dayton Avenue. I sleep easier at night in the canopy of that sweet dream of redemption. This spring I endeavor to set it in motion.