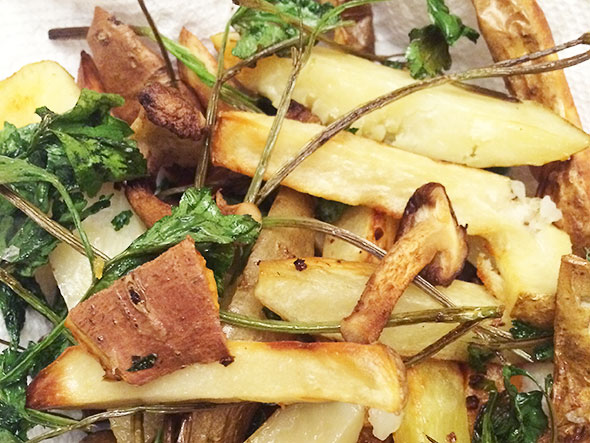 During the recent rash of school closings, my family spent a lot of time together at home. I took the early shift looking after the children while my husband taught his physics classes at Central State. The responsibility of lunch fell to me. No one starved, but there was discontentment within the ranks. At one meal, our four year old son looked up from his plate with considerable consternation and voiced his disappointment, “I want french fries.’

Clearly someone was missing his cafeteria food. I heaped an extra helping of blueberries—the boy’s favorite—on his plate and deliberated his request. The first thought that came to mind was one of Michael Pollan’s Food Rules: “Eat all the junk food you want as long as you cook it yourself.” Pollan’s idea is that fast food conveniences don’t translate readily to home cooking. Sure you might love french fries but who wants to deal with a vat of 325-degree oil so you can twice quick-fry potatoes to crispy goldenness? I hedged at the waste of so much essential food store as much as at the hazards of searing hot oil on my stove. 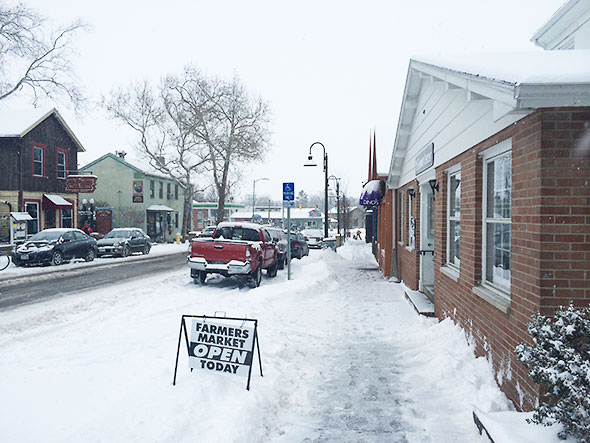 I did have potatoes—fist-sized carola potatoes that I bought Saturday from Flying Mouse Farms at the Winter Farmers Market. I even remembered overhearing Michele Burns recommend the variety to a customer who was planning a batch of homemade fries. Grabbing a computer, I flipped through a few recipes online. Though I baulked at actually frying my potatoes, I did take note of a common thread in the recipes. Most recommended soaking the cut potatoes in water for an hour or so. The water keeps the potatoes from browning once cut and also removes surface starch to improve the crispiness of the fries. 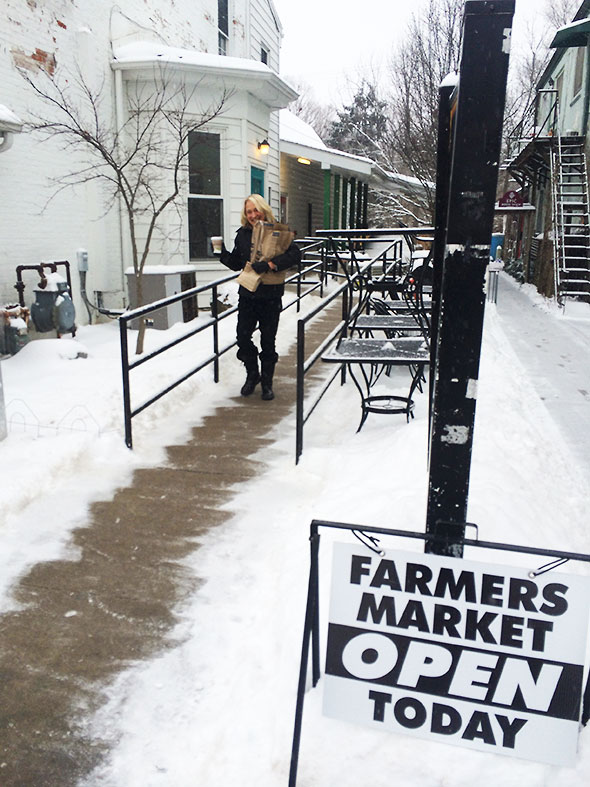 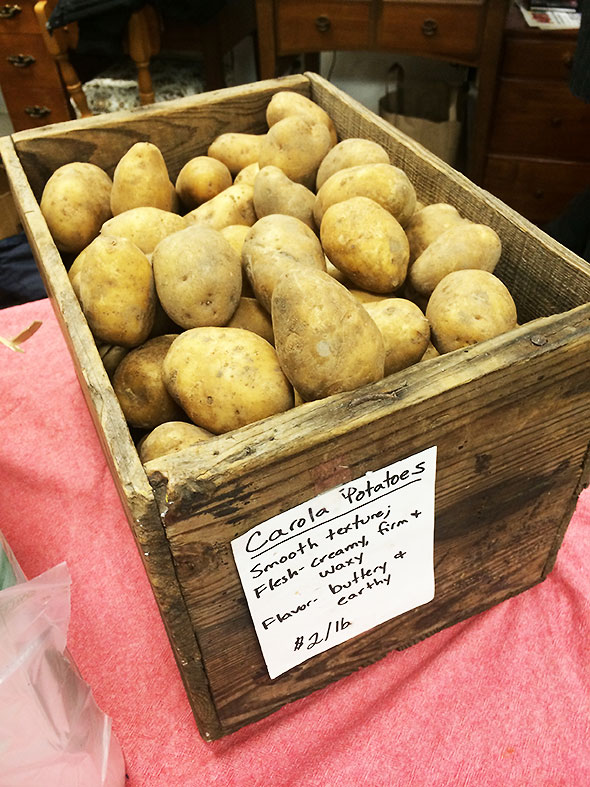 Bypassing all the complicated deep fry procedurals, I zeroed in a blissfully simple recipe for baked french fries: Dress slice potatoes in oil and spices then cook in a 450 degree oven for 45 minutes. Easy enough. My daughter and I washed up five medium potatoes and worked on her knife skills. Leaving the peal on, we cut the potatoes into wedges first and then strips. I taught her knife safety such as where to set the knife down [NOT on the cutting board], how to grip its handle, and how to curl the hand that holds the food to be chopped. I made the first indents into the potato’s flesh so she could seat the blade firmly and we’d both worry less about the knife slipping. She completed the cuts and soon filled a bowl with the strips of potato. 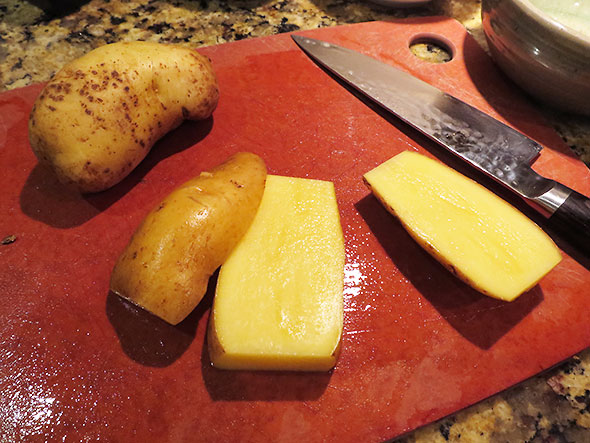 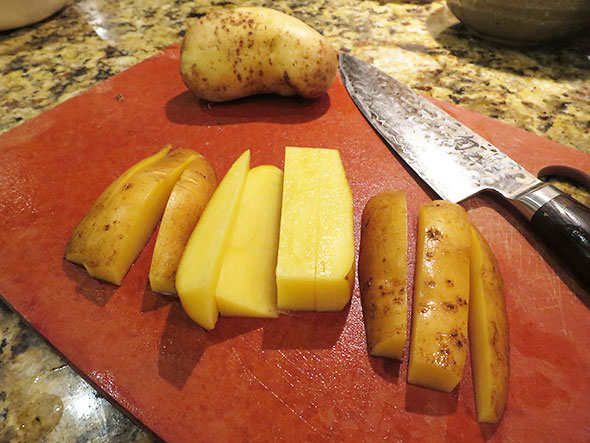 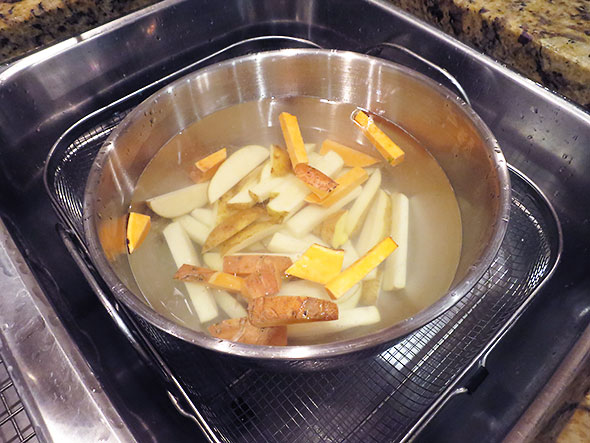 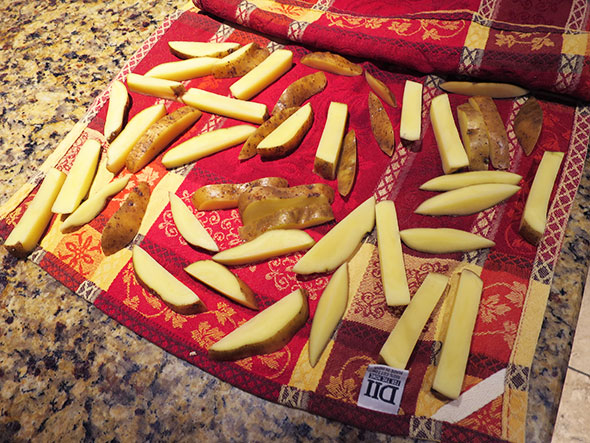 While I was away, it occurred to me that I could have some fun with the fries. I remembered a cluster of shiitake mushrooms that I had stored in the refrigerator. I also had a bunch of parsley awaiting an uncertain fate. I imagined dressing these vegetables and adding them to the potatoes near the end of the roasting time. I started to get excited about the meal myself. Oooo, I could even grind up my dried garlic cloves and add garlic powder to the dressing. 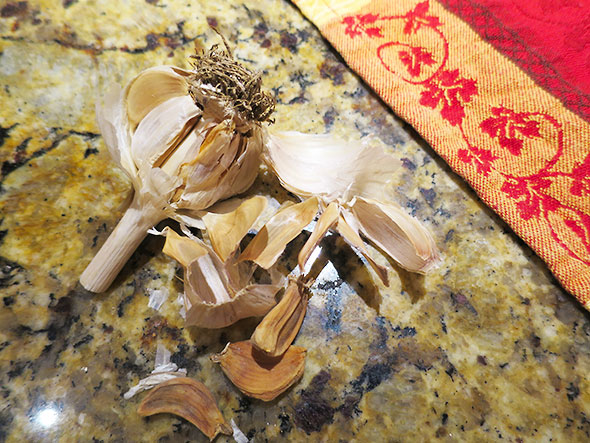 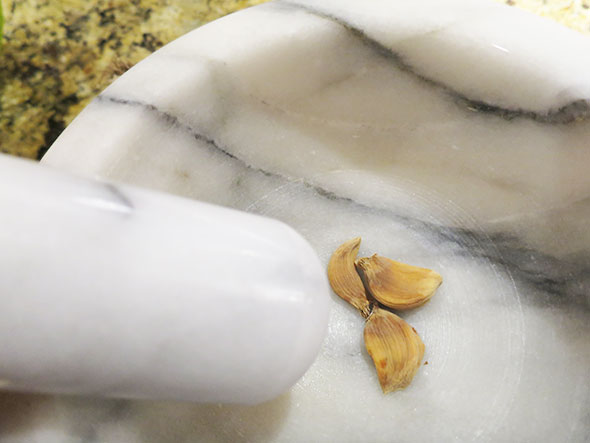 Later that day when I arrived home, I drained the potatoes and patted them dry. I preheated the oven to 450 degrees and prepared the oil-based dressing as Jeremy prepped the lamb burger patties. For the dressing, I selected walnut oil from the pantry. I drizzled the oil along the walls of a tall bowl, added salt and pepper, then tossed half the potatoes in the seasoned oil. I loaded this relatively plain batch for the kids on a broiling pan and slid it into the oven to bake 45 minutes. Then I started the adults’ version of the fries. This late in the season, my entire stock of garlic heads are dried up so now, if I want to add garlic to the soup, I have to grind it to a powder first. I selected three cloves, ground them to a fine powder using a pestle and mortar, then sifted the powder into the oil-based dressing. I tossed the remain potato strips in the garlic dressing and loaded them on a separate pan. I added them to the oven to bake and turned my attention to the mushrooms and parsley. I cubed the mushrooms but left the parsley whole tossing them both in the flavored walnut oil. When the potatoes were 30 minutes into their baking cycle, I removed the pan of garlic spiced fries and covered them with the mushrooms and greens. Jeremy fried the lamb burgers in a covered pan on the stove top and, 15 minutes later, we ate. 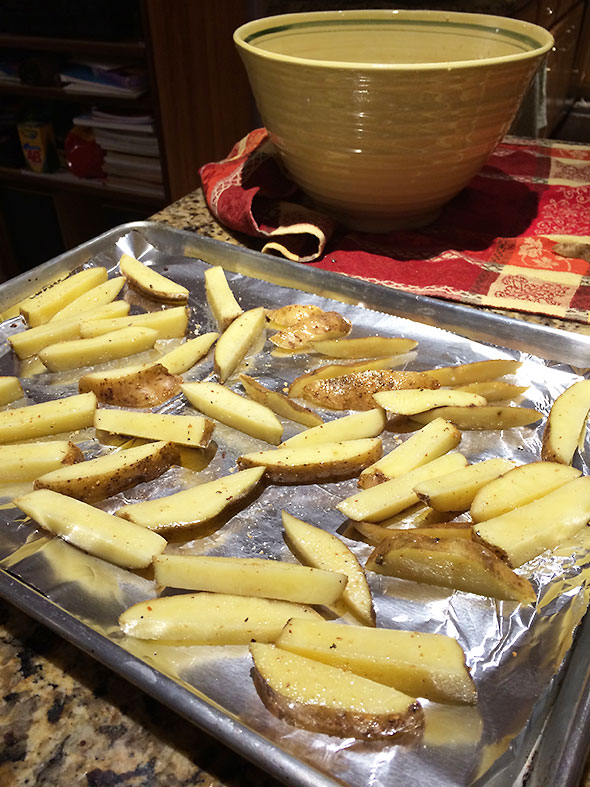 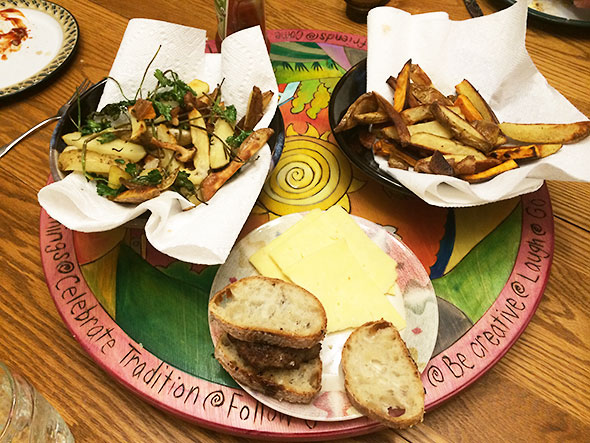 Jeremy and I make a conscious effect to introduce vegetables into our children’s diet. We need not exert ourself when it comes to white potatoes. The family finished off those two pans of baked potato fries in no time. Our recipe for baked french fries is almost too easy. It’s only inconvenience is the presoak, and that step can be accomplished with a rinse. When it comes to french fries, the family may have to adjust Michael Pollen’s well intended advise. So simple, so good, it’s tempting overdo the starchy food. French fries rule. For now my children may insist “I want french fries!” but I hope—through the redemptive art of home cooking and its interesting choices—to guide my children to an appreciation of fine healthier foods.