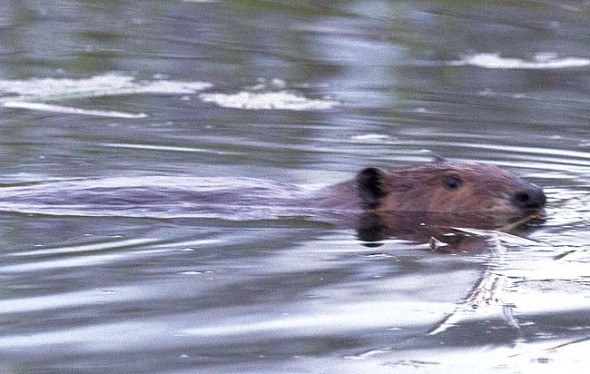 One of the beavers present in the Glass Farm wetland. (submitted photo by Scott Stolsenberg)

At their Jan. 20 meeting, Village Council delivered a setback to a group of local environmentalists who sought to develop a management plan for a wetlands on the Glass Farm. The group requested Council’s approval for a federal grant application that would provide funding to help manage the wetland, increase species diversity and also find solutions for flood control and other neighbors’ concerns.

“Yellow Springs could become a model” for how to balance the needs of wildlife and humans in wetlands development, according to Nadia Malarkey, a member of the newly reconstituted Environmental Commission, which sought Council approval for the grant.

But the majority of Council worried that the group was moving too quickly, and that a grant would lock Village government into a project it has not fully embraced, and which may have unintended consequences.

“I don’t think this is a bad idea …” said Village Manager Patti Bates, who recommended against the grant application at this time. “I’m concerned that we’re rushing into this without proper preparation.”

Council members Karen Wintrow, Brian Housh and Gerry Simms agreed with Bates, and the final vote was 3–2, with Marianne MacQueen and Lori Askeland voting to support the EC request.

At issue is a 3- to 4-acre area on the northeastern edge of the 43-acre Glass Farm, which has been zoned for conservation due to the wetness of the soil, which makes it inappropriate for development. The land was the site of a largely dry detention basin until three years ago, when beavers moved in and, through building dams, created a wetland. However, some neighbors believed the dams contributed to neighborhood flooding, so Village staff removed the dams several times until they came up with a way to serve both the neighbors and the beavers. With the help of Vickie Hennessy of the Green Environmental Coalition, the late Village engineering consultant John Eastman created a “beaver deceiver” device that allows water to flow out of the area while still allowing the beaver activity. So far, the device seems to be working.

The resulting wetland has led to a significant increase in new species in the area, according to Hennessy, who presented a slideshow of photos of the area taken by neighbor Scott Stolsenberg. The photos show great blue herons, red-winged blackbirds, indigo buntings, great egrets, red-shouldered hawks, grey catbirds, cedar waxwings, green frogs, snapping turtles and other wildlife that live near water.

“Beavers are a keystone species that create an environment that supports other species,” Hennessy said. “Most of these species would not be here without the wetlands.”

Several neighbors who support the wetlands spoke in support of the project.

“The change in the last three years has been amazing. It’s like a second Glen,” said Lew Trelawny-Cassity, who said he and his young children enjoy watching the birds and animals. “This is a great place for families. It impacts the neighborhood in a positive way.”

Neighbor Barbara Sanborn also expressed support for the project, and for the grant application.

“Now that we have expertise to study this, it’s better to act sooner rather than later,” she said.

The grant, which has an early February deadline for application, would provide about $30,000 in federal funding while grant partners would provide $20,000 in inkind contributions. The group also requested $10,000 from the Village greenspace fund. Partners included Antioch College, which committed to providing services from two science professors and monitoring activity from several students, including a fulltime co-op student; YSI/Xylem, which would provide equipment and personnel for collecting data samples; and Tecumseh Land Trust, which committed to providing volunteers and assisting with educational programs.

The grant would have provided funding for developing a management plan for the area and to purchase fencing that would protect trees, create new flow-devices if necessary to control flooding and remove invasive species, according to the proposal. Overall, the grant-funded activities would enhance efforts to allow beavers and humans to share the area, according to EC member Duard Headley.

“This would allow more resources to develop an effective plan to balance everyone’s needs,” Headley said.

However, several Council members feared the grant would pave the way to a commitment to the wetland that they had not signed on for when they approved funding the original “beaver deceiver” flow-through device.

“I would feel irresponsible supporting this with so many questions,” Wintrow said.

The questions involve whether the flow-through device works in all kinds of weather; so far, it has only been in place through the fall and winter.

“I want to see it go through a spring and summer season before we make plans” for the area, Simms said. Another question involves whether the wetland would require extra work from Village employees, especially if the project partners’ interest wanes, he said.

“Yellow Springs has a history of being gung-ho in the beginning, and then dropping off,” he said.

Village Superintendent of Streets and Parks Jason Hamby also stated that some neighbors are opposed to the wetland due to concerns about flooding and opposition to some of the new species, such as Canada geese.

In the end, while Council members said they hope the group currently working with the wetland continues its efforts, the majority was not willing to support the grant application.