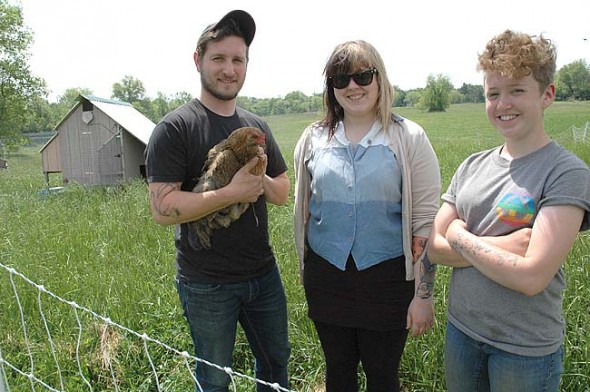 Antioch College Food Service Coordinator Isaac Delamatre joined students Sara Brooks and Rhianna Guerin on the Antioch Farm last week to talk about a growing group of 35 colleges and universities who have committed to consume at least 20 percent real food (local, humane, ecologically sound and fair trade) by 2020. Though new to the Real Food Challenge, the college is already leading the way with a pledge of 60 percent real food by 2020. (Photo by Laruren Heaton)

At the Antioch College dining hall last week, the kitchen was serving turkey melts with pasture-raised poultry from New Carlisle, eggs from a family-owned farm in Xenia and organic salad from the college farm about 500 yards from the kitchen. In the world of institutional dining, and in particular in institutions of higher education, food considered “real,” meaning sourced from locally owned, ecologically sound, humane farms with fair employment practices, is apparently quite difficult to obtain. That’s why a national student group is challenging campuses across the country to commit to serving at least 20 percent real food by 2020.

The standards of the so-called Real Food Challenge are ones Antioch College has built its campus culture around since rebooting in 2010. And the college is already well beyond the minimum needed to meet the challenge goals.

According to Antioch Food Service Coordinator Isaac Delamatre, 56 percent of Antioch’s food is considered “real” by the Challenge standards, which is second in the nation only to Sterling College in Vermont, which consumes 74 percent real food. For the challenge, Antioch has committed to 60 percent real food by 2020.

By comparison, Oberlin and UC Santa Cruz committed to 40 percent real food by 2020, while other campuses such as University of Massachussetts Amherst, George Washington University and 21 others signed on to the minimum 20 percent — out of just 35 schools that made a commitment at all.

The Antioch farm, currently producing the kitchen’s kale, greens, onions and asparagus, has something to do with the college’s high real food score. Of the campus’s total food purchases, 28 percent comes from the farm. That makes that portion not only “real” by Challenge standards (grown within 150 miles of the institution), but grown 1,500 feet from where it is consumed. Students work and help manage the farm, a fair employer, and grow and raise the vegetables, fruit trees, chickens and ducks organically and humanely, surpassing USDA organic and Animal Welfare Institute standards.

Delamatre is the other reason for Antioch’s high real food score. Instead of hiring a food service provider, such as Sodexo, a multi-billion dollar global corporation, when it opened in 2011, the college hired Delamatre, who has always sourced local foods from growers he knows and whose farms he visits regularly.

“My main objective is to buy directly from the producer because then they dictate the price, it holds them accountable for their products and it supports the local infrastructure and economy,” he said.

In addition to what comes off the campus farm, 13 of the college’s 14 food suppliers are within 30 miles of Yellow Springs, including Buck-I-Hillz and Flying Mouse farms in Yellow Springs, Ed Hill chicken farm in Xenia and Keener pork and beef farm in Dayton. Instead of having produce, meat and grains from across the country trucked to campus by an industrial supplier, Delamatre and fourth-year student Sara Brooks drive the Antioch truck to make their own pickups.

“It’s a lot of driving,” said Brooks, who learned about sustainable farming when she came to Antioch and committed to it early because it was consistent with the principles of social and environmental justice that the college was built on. As the college’s assistant food service coordinator, Brooks is totally convinced that a self-operated local food service is right for college campuses.

“Once you include the educational aspects, it’s a no-brainer,” she said.

Sustainability is part of the global seminar that every student takes at Antioch because it touches all the academic disciplines and is a world-wide problem that will need solutions. According to Delamatre, having students involved on the farm and in the kitchen enables them to apply their classroom learning in the tradition of the Antioch College co-op to start solving some of those issues.

“If you just started serving real food, you’d miss the opportunity to have a grassroots push where a lot of education happens,” he said. “You don’t want to move too fast because you miss out on the meat of it — it’s a natural progression to learn about it and then ask, ‘why aren’t we doing it?’”

At Antioch people are doing it, and setting higher standards for peer institutions.

“Our goal is to push the model and to act as a catalyst for others,” Delamatre said of the sustainable food movement.

The college has a Food Committee with both college, village and agricultural representatives to guide food policy and sponsor food-related educational films and events on campus, according to Brooks. The campus also has initiated partnerships with the local school district and the local food pantry and has several community projects in the works, she said.

For Antioch the real food challenge will be to keep growing its real food content as it grows in size from the current 250 students to an interim size of about 600 within the next several years, according to Antioch Communications Director Matt Desjardins.

“For a school this size, Antioch is punching above its weight — partly because it had a chance to start from scratch,” Desjardins said. “But people have to care about [sustainability] too,” as college leaders do, he said.