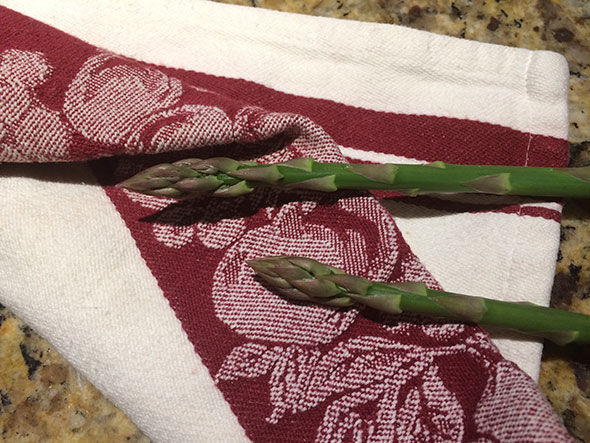 The garden is beckoning. Outside the birds are laying claim to territory singing out their sweet calls of “Here, hear, here!” This morning, one plump male robin perched briefly on our fence. In its mouth, it held a treasure: the flowerhead of a hydrangea still full of last year’s blossoms and hints of their former perfume. The resolute bird bent its legs deeply and sprung into the air…off to feather its nest with this fabulous find. 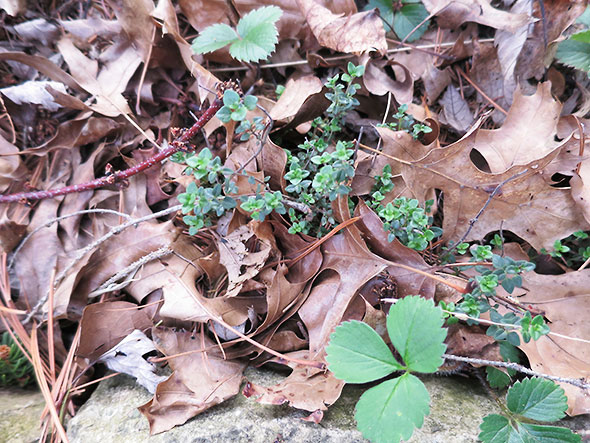 I’ve been combing through our gardens in search of treasures myself. Green herbs are among the leaders breaking ground through the leaf litter, asserting themselves with a passion for spring sunlight. The resurgence of two perennials—one oregano plant and two tarragon—is an especially welcome sight. Previous attempts to establish these herbs in our kitchen garden failed. These particular plants, however, emigrated from well established beds within a two block radius. There, they first proved their resiliency: The oregano and tarragon had reached the point where their populations required regulation. I offered safe harbor and resettled a few citizens in open beds with ample room to grow. I am happy to see them taking to their new habitat. 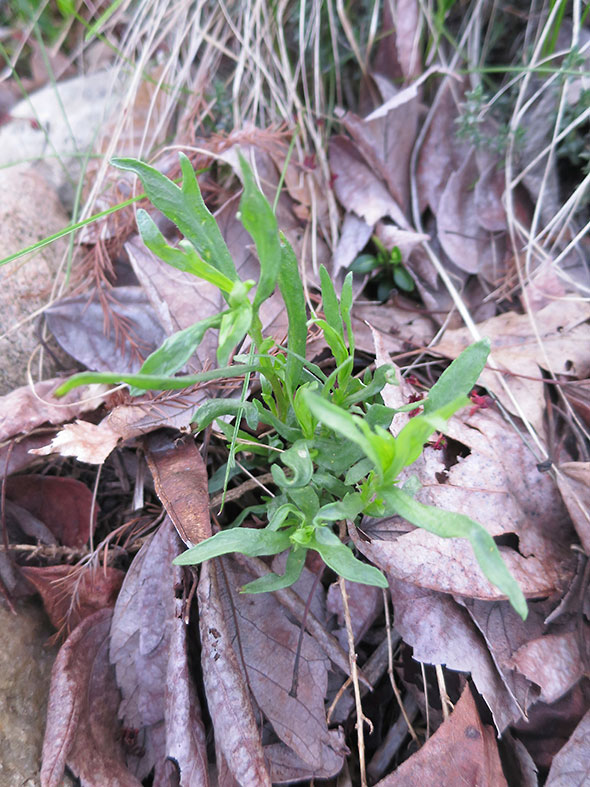 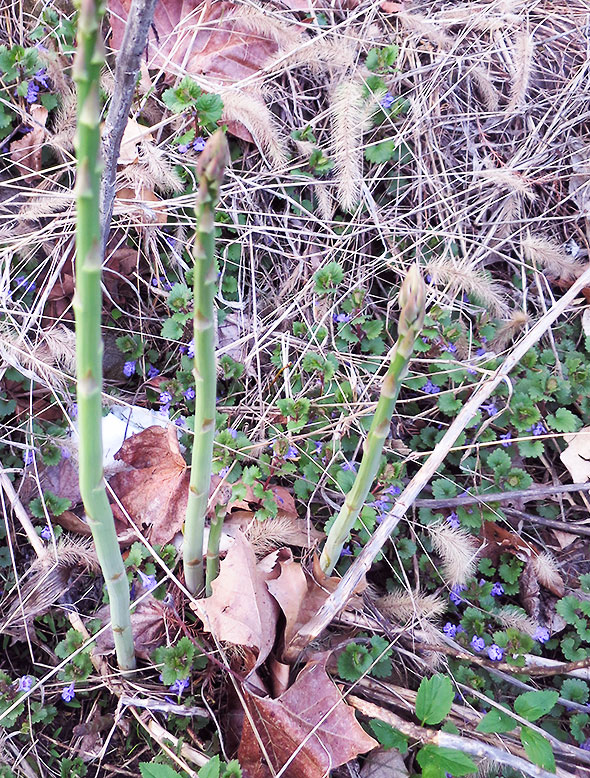 The asparagus plant in our front garden is in its second year of transplant. Its first shoots beat the last frost again, this time by a solid week…long enough to survive winter’s final bite. The shoots appeared suddenly—10 to 20 inch spears—out of the leaf litter. We plucked the two tallest from the garden and brought them inside for a late night snack. Dressed with agrumato and briefly drenched in the broiler’s heat, the asparagus took on a brilliant emerald green color. I offered them to the family with a makeshift vegetable dip composed of greek yogurt, a dusting of freshly ground garlic, and a drizzle of syrupy balsamic vinegar. 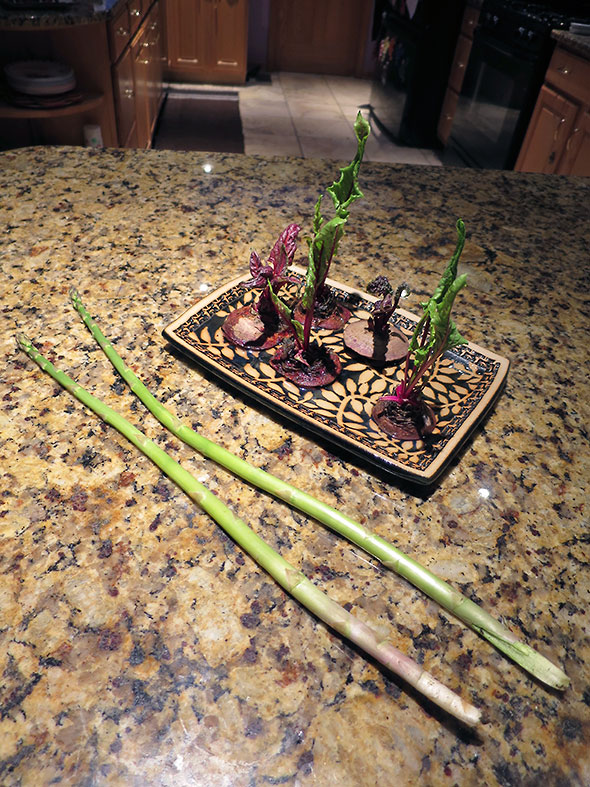 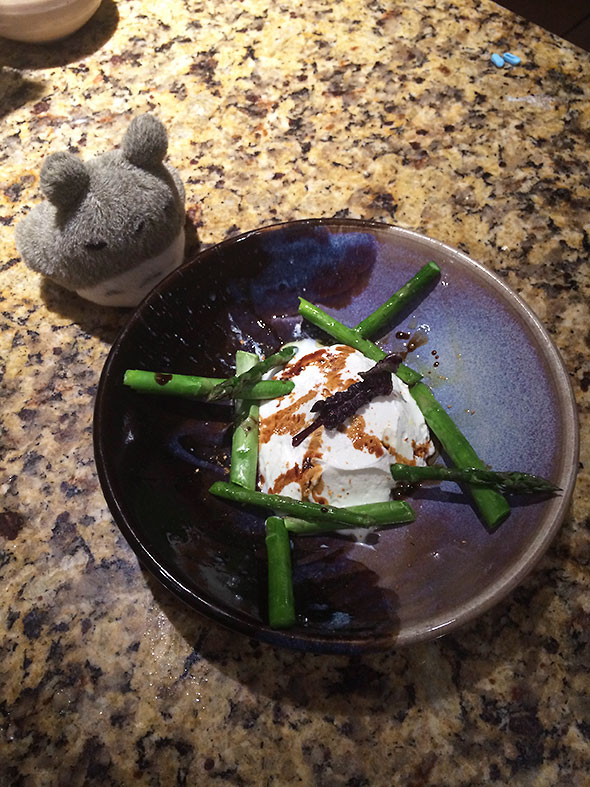 Outside along the asparagus, a line of transplanted garlic is growing. The garlic came from the same garden as the resurgent tarragon and now defines the southern edge of our front garden. Their root systems did not recover in time for a harvest last year but the plants seem on track this season. If so, I’ll be harvesting scapes—garlic’s flower bulb—later this month. 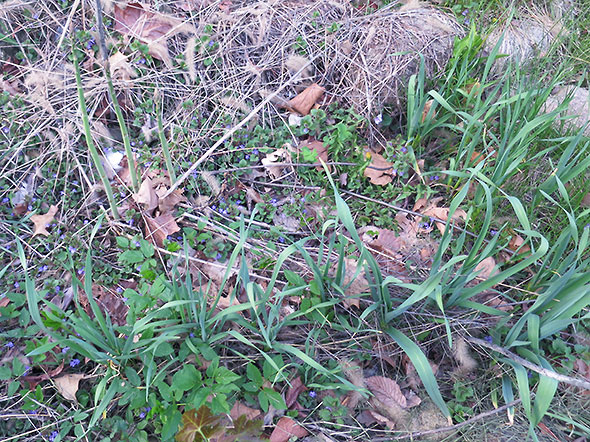 In the kitchen herb garden, I’ve cleared off the stone path and swept pine needles clear of the retaining stone wall. Another gardener, like the morning’s industrious robin, has taken to pruning one of our hydrangea bushes, this one at the elbow of the stone path. This gardener seems rather opinionated—its pronounced interests in competition to mine—and prefers the hydrangea to not overhang the mountain mint, thank you very much. Its pruning has encouraged the bush to lean in the opposite direction and, as such, the hydrangea has overtaken the path. For the sake of the plant, I yielded to the beast gardener and, instead of cutting the hydrangea back further, widened the stone path to accommodate passage. 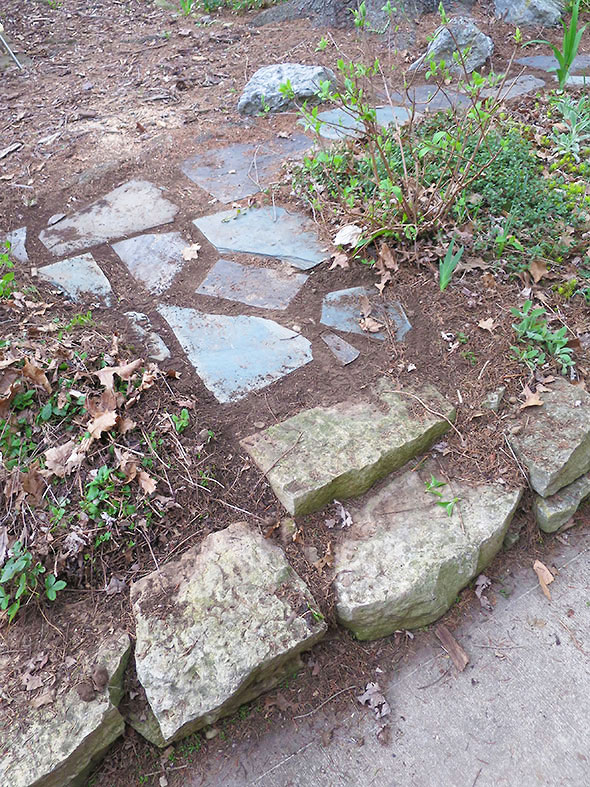 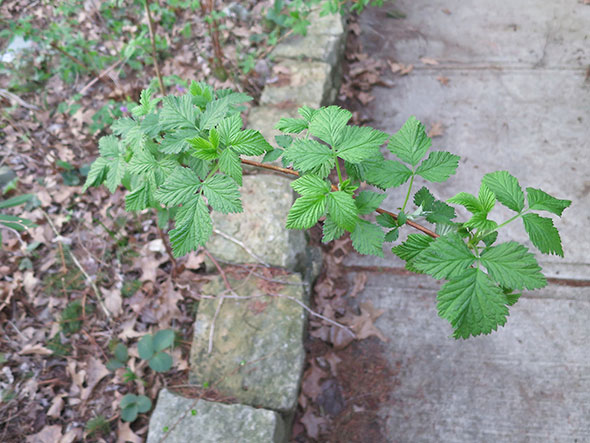 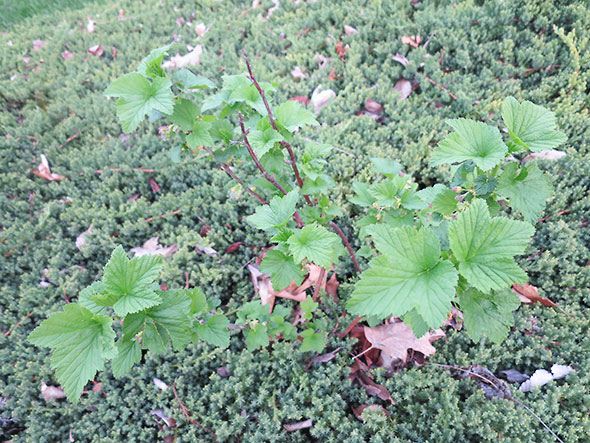 This occasion is not the first time that the local wild life has taken to pruning our garden plants. A family of deer usually stops by to chew on the raspberry bushes. I was annoyed by their foraging at first but, then, Dan Dixon informed me that, really, I should be cutting the bushes back myself. The idea is to stimulate growth and obtain a better yield of raspberry. “No worries, Dan”, I told him, “I have help.” The deer occasionally deadhead my rose bushes while they are about.

Gardening is a constant conversation with nature. Nature, I find, is rarely accommodating but it commands my attention with its ambitions and talents. It weeps, it rages, it whispers in its sleep. Mostly though it sings, “Here! Hear, here!”