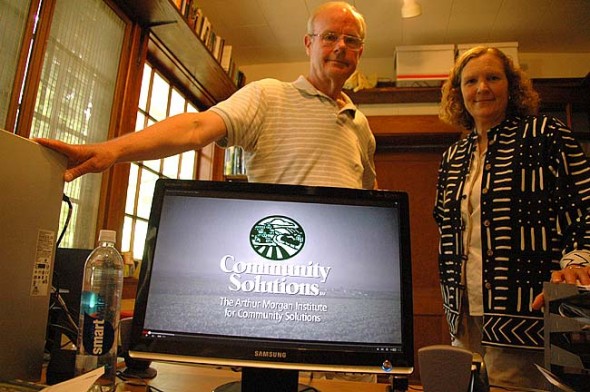 When it comes to people fighting climate change, Yellow Springs has a lot of stories to tell.

The Arthur Morgan Institute for Community Solutions is looking to tell these stories and more on its new Energy & Climate YouTube channel, which will prominently feature Yellow Springers on the front lines of climate action.

The purpose of the channel is to share the successes, and mistakes, of villagers as they try to cut greenhouse gas emissions, while highlighting the efforts of the Village of Yellow Springs as a town, according to project filmmaker Eric Johnson.

“Everywhere there are examples of people doing things,” Johnson said. “We want to inspire others with these people’s energy and enthusiasm.”

Community Solutions is currently seeking donations for the project on the crowdfunding site Power 2 Give, where $3,600 of a $9,659 goal has been raised. The local non-profit, founded in 1940 by Arthur Morgan, previously received a $6,600 gift from the Yellow Springs Community Foundation, $1,000 from Antioch College and $1,000 from Solar, Power & Light for the project. The DP&L Foundation is donating $0.50 for every dollar raised on the Power 2 Give site.

The deadline to donate is Monday, June 15. The channel, which currently features around 20 videos, can be viewed at http://www.communitysolution.org.

The idea for a local sustainability-themed YouTube Channel grew out of a bus trip of 50 villagers and Antioch College students to the world’s largest climate march in New York City last September. Many returned with a charge to do more personally, and locally, to combat climate change, and went on to start the Yellow Springs Resilience Network. A smaller group visited Oberlin to learn how that town of 8,300 was on track to cut its carbon emissions to 50 percent of 2007 levels by 2015.

Last year Oberlin was one of 16 communities honored by the White House as a Climate Action Champion and is currently in the running for a $5 million Georgetown Energy Prize. Several videos on the YouTube channel document ideas that impressed the group, including the use of energy “dashboards” which monitor, in real time, energy and resource use community-wide. But Johnson and others felt that in many ways, Yellow Springs was further along in going green.

“We were struck by [being] in some ways ahead of Oberlin, especially in housing,” Johnson said, adding, “We don’t want to make it a competition with Oberlin, but we’re proud.”

While Oberlin’s efforts seemed to be led by the city, Yellow Springs’ climate action has been more grassroots and centered around homeowners, according to Susan Jennings, executive director of Community Solutions.

“In Yellow Springs there is a much more broad-based approach,” Jennings said. “The YouTube channel is an important part of highlighting this because the reason that most people change is because their neighbors change.”

Jennings cited research showing that emphasizing peer behavior has the largest impact on whether someone will go green, more so than pointing out cost savings or appealing to a concern for the earth or future generations.

“It’s not a project to just illustrate what’s happening but to spark change on an individual level as well as a community level,” Jennings said.

There are videos that showcase the energy-efficient and green features of the new Mills Park Hotel, explore Antioch’s solar-powered geothermal heating and cooling system and tour local passive houses and more videos are planned that will cover the Village streetlight replacement and locals who drive plug-in electric vehicles and bicycle to work. In one video, local energy and climate expert Bob Brecha, who has worked with Intergovernmental Panel on Climate Change, gives an update on the state of climate change and dire forecasts, explaining how the living system of Earth “breathes.” Villagers may soon be able to upload videos of their own.

The progress of Yellow Springs’ towards climate neutrality will also be featured at a gathering of local and national experts in Yellow Springs the weekend of September 25–27 for Community Solutions’ annual conference. While Yellow Springs may be further along than some towns, Johnson cautioned that the village still has a long way to go.

“There’s no doubt that we are just scratching the surface of what needs to be done,” Johnson said. “But you can go the depressing route of ‘no hope’ or you can celebrate that which is going on in the right direction and hopefully it will build momentum.”

To donate, visit the http://www.power2give.org and choose the Dayton region of Ohio.