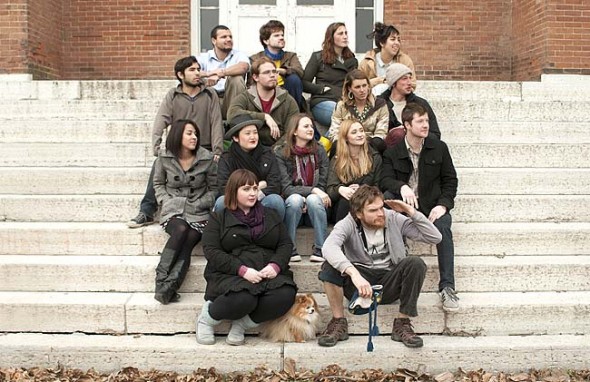 There are many names for the revived Antioch College’s first graduating class, and much to be said about them. They laid the foundation of the new Antioch. They were constantly under a microscope. They endlessly championed Antioch to potential donors and prospective students. They relit the flame of activism at the college. And they diminished; from the initial 35 students who entered in fall 2011 they are down to 22, 21 of whom are graduating.

Far from the typical college experience, the inaugural class of Horace Mann Fellows received an education in how to rebuild a college. It wasn’t easy, but it was formative.

“Antioch was definitely a formative experience, but in the most challenging way possible,” explained Sara Brooks, who graduates with a Bachelor of Arts in philosophy. “The opportunities for student leadership, the grassroots nature of the project we stepped into, made us have to grow … We had to do things we wouldn’t have had to anywhere else.”

To Guy “Jack” Matthews, who studied anthropology and political economy, the Antioch experience centered around recon­ciling differing ideas for the institution. Antiochians, Matthews now believes, can change the world.

“We have seen that individual Antioch students are devastatingly effective, but when we work together we are even more effective than that,” Matthews said. “Even in the small numbers we have, we can change the world.”

The achievements of Antioch’s first class after reopening will be celebrated at a commencement ceremony at 10 a.m. Saturday, June 20, on the campus lawn between North Hall and Main Building. U.S. Congressman John Lewis will give the commencement address congruent with the theme of reunion weekend, “From Civil Rights to Social Justice.” In addition, six students in the Class of 2015 will speak to their college experience, followed by the traditional walk over the mound.

The historical moment for Antioch, which hasn’t held a commencement ceremony in seven years, is pivotal, according to Vice President of Academic Affairs Lori Collins-Hall. The first class did a lot of heavy lifting in rebuilding the college, took a risk on an unaccredited upstart institution and didn’t have many resources or facilities at their disposal, but nevertheless showed a lot of perseverance and patience, Collins-Hall said. They shaped, and were shaped by, the nascent college.

“They were a phenomenal group in the sense that they took a chance on us, they came in and invested a lot of their own time and energy to co-create a lot,” Collins-Hall said, adding, “I don’t know how empowered they felt. There was a feeling they had to fight for everything.”

When the first class arrived in 2011, there were just six tenure-track professors, one dormitory — where students slept, studied and ate — and one classroom building. For the first quarter they ate only take-out food. The class waited three years for a Wellness Center and three years for an Arts and Science Building, taking science classes out of a trailer until it opened. By the end of the first year, four students had left, and by last fall, another eight had departed.

Students graduating this year may be the only ones who will leave Antioch with a degree from an unaccredited institution. They will still receive Bachelor’s degrees in art or science. By next year’s graduation, the college will have received word about its accreditation.

Speaking of the challenges, and the Class of 2015’s ability to overcome them, Ryann Patrus, who is deaf, found some difficulties accessing her courses in the first two years.

“There were a lot of roadblocks to accessing my courses and it took a long time of me voicing that I needed certain things,” Patrus said.

But Patrus went on to pave the way for others with hearing disabilities by working with the Center for Academic Success to set up disability services for them (there is currently another hearing-impaired student). Last Thursday, a campus-wide action organized by another student to show how many buildings are not accessible to those with physical disabilities made Patrus feel like others are picking up the torch as she departs.

“I felt like I was the only one talking about these issues, so seeing other people rally around a student action was powerful,” Patrus said. “I feel comfortable leaving knowing there are people coming up behind me who are equally passionate. It gives me the warm fuzzies.”

Patrus, who is receiving a Bachelor of Science degree in psychology, plans to go on to graduate school after a year break to further pursue disability studies.

Brooks also said Antioch influenced her life direction. She is continuing this summer as the assistant food services coordinator, and it was her time in the Antioch kitchen that made her want to be a cook. After the summer Brooks plans on looking for a cooking position, perhaps at a collectively-owned restaurant. She also wants to be involved in union organizing and admits that, as a first-generation college student, she likely wouldn’t have earned a college degree had she not attended Antioch.
At the same time, Brooks has had her share of challenges at Antioch. The initial dearth of resources for students, including health services and student success services, was frustrating.

“It was bare bones,” Brooks said.

Brooks was told that Antioch is essentially “Fight the Man 101” and indeed many students spoke of clashes with administration. While miscommunication played a role, Brooks said that the real issue between them and among students was the differences in interpreting Antioch’s history, and visions about its future.

“Everyone wants something different from Antioch now,” Brooks said. “People in my class had a vision of what to expect when they got here, and the people who were here already had their own visions.”

Brooks said she learned that it is easy to point out the negatives of an institution to improve it, but it’s more useful to do the hard work in fixing the problems. As for the legacy of the Class of 2015, Brooks believes it is in “bringing forward the history of Antiochians in activism and social justice.”

Ethan Kellaway, who is graduating with a Bachelor of Science in environmental science, found it difficult to study science at an institution without a true lab, and struggled to keep up with a year-round schedule without breaks between academic terms and co-ops, which he likened to a “slow burn down.” For Kellaway, the most enriching part of the experience was simply the conversations with other students, particularly on the issue of identity.

“The conversations I’ve had helped me think more about myself and the world,” Kellaway said. “I came from a non-racially diverse community and so I have explored how I was exposed to prejudice growing up.”

Matthews was mostly encouraged by the change in community governance the Class of 2015 enacted, which was “an enlightening experience in how a school can be run with first-year students and the administration acting on equal terms.” Matthews even went on to form his first political party at Antioch. The former chair of the Council of Conveners is looking to get a job as a paralegal for a year before going on to law school. After a co-op at a law firm specializing in labor law in New York, Matthews found the type of law he wanted to practice.

In fact, several students cited their four co-op experiences and other experiential learning as a highlight of their time at Antioch. Diana Zavala-Lopez had an “eye-opening” experience teaching English and sports in India, and she affirmed her desire to work in criminal justice as a forensic psychologist after an “Inside Out” class where Antioch students learned alongside prison inmates. Kellaway co-oped at EnviroFlight, where he will work after graduating, and also spent co-ops at a sled dog kennel and glass blowing shop after being encouraged to choose co-op jobs not just on career aspirations but to “explore a passion.” Students went on four co-ops during their time at Antioch.

According to Richard Kraince, Dean of Cooperative, Experiential, and International Education, in total there have been 540 co-op placements since the Class of 2015 arrived, including 54 international experiences. Students in the Class of 2015 went to Japan, Nicaragua, France and Mexico. Kraince is now working with graduating students to write their co-op experience on an online blog and update their résumés. Some students are staying in Yellow Springs and Antioch, working in documentary filmmaking and on the Antioch farm. Others are departing for graduate school, art school or to organize large progressive events. The Class of 2015, who Kraince said is “older, more articulate and more argumentative” than the other classes, will be missed.

To Dean of Admissions Micah Canal, who was among the graduates at Antioch’s last graduation in 2008, the first graduation of the reborn Antioch feels “a bit bizarre” because it doesn’t seem that long ago that he walked across the stage. In the meantime, Canal, one of the original founders of the new Antioch, has helped the college grow from a “total embryo to something graduating students and raising $20 million per year,” he said, adding, “and we’ve only just begun.” Asked to describe the Class of 2015, Canal said “they were brave,” and many were transformed by their times at Antioch, including the difficult ones.

“The skill set of facing imperfection and drawing out a more perfect solution is one that is going to serve them well for their lives, and one the world is in dire need of,” Canal said.

Students said that at times they haven’t been appreciated for their hard work in remaking the college, citing a line in an external survey report that said a few students and staff thought that the campus climate would improve with their departure. Zavala-Lopez remarked of the comment, likely made by just one or two people, “But there wouldn’t be a college without us.”

Looking at the future of the institution they invested in so heavily, and now depart, students are optimistic. Matthews said the most recent demonstration around accessibility issues showed him “this school is going to go on making the same difference it always has, both on and off campus.” Zavala-Lopez said she hopes that Antiochians remember that even though they are passionate about their beliefs, they should stay open-minded and not “bully” each other. Patrus urged future classes of Antiochians to be gentle with one another, since everyone is growing and changing so fast in their college years, and also to not get too discouraged about slow progress towards change on campus.

“It gets discouraging when you can’t mold this place to what you want it to be when you come in thinking you’re going to have all this power,” Patrus said. “But you pay attention, and work diligently your four years here, you will see the change … You’re not going to change everything, but learn to appreciate those little things you can change.”

One Response to “First class faced, rose to challenges”