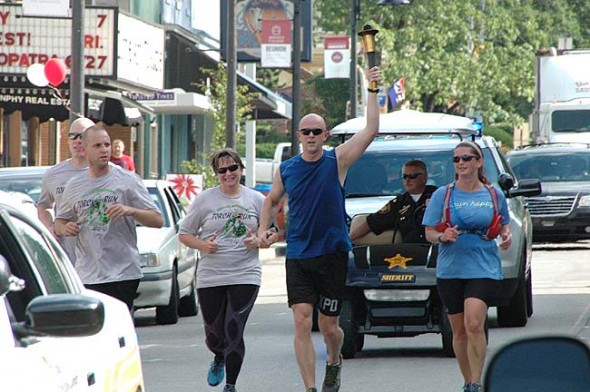 Captain Steve Lane of the Xenia Police Force and also a veteran runner for the Torch Run, ran the 11.7 mile leg from Xenia into Yellow Springs. The route took the runners along Xenia Avenue, where “about 100 to 150 people” lined the streets to cheer them on, according to Lane. The village welcomed the runners by placing red and white balloons along the downtown stretch.

The run took place June 18 – 26 across Ohio, where volunteering officers carried the torch through 150 communities throughout Ohio, creating awareness of Special Olympics and raising funds for the program.

The Torch Run culminates in the Final Leg coming into Jesse Owens Memorial Stadium in Columbus Friday, June 26 to pass the “Flame of Hope” to Special Olympics athletes during Opening Ceremonies. This will signify the official start to the 2015 Special Olympics Ohio State Summer Games.

According to the website Special Olympics Ohio, the “Law Enforcement Torch Run began in 1981 when Wichita, Kansas (USA) Police Chief Richard LaMunyon saw a urgent need to raise funds and increase awareness of Special Olympics. …The idea was adopted nationally three years later, and today involves law enforcement personnel in all 50 states and about 25 countries throughout the world.