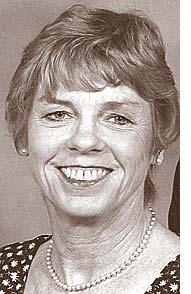 Virginia (Ginny) Brintlinger Willey passed away Thursday, May 28, at the Hospice House of Williamsburg, following a six-month struggle with leukemia. She was born on May 12, 1937, in Bloomington, Ill., the daughter of Emory and Angeline Conrady Bolin, both of whom preceded her in death.

Ginny graduated from the University of Illinois and taught English and journalism at Barrington (Ill.) High School before becoming a full-time mom. When her children were older, she joined the staff of the Arlington Heights, Ill. Daily Herald, where she worked as a copy editor for over 22 years until 2006, when she retired with her husband Allan to Williamsburg, Va.

Ginny treasured her years as a full-time mom, where she followed the progress of her three children through their academic and extracurricular activities. All three children were active competitors in swimming and other sports, and Ginny enthusiastically supported their efforts.

At the Daily Herald Ginny’s love of English and journalism were put to use. She really enjoyed the challenge and excitement she found in the day-to-day flow of producing a newspaper, and she was particularly proud of her award-winning headlines.

When she retired and moved to Williamsburg, she found new outlets for her skills, serving as a volunteer at Colonial Williamsburg and as the secretary for the Woman’s Club of Williamsburg. She also joined the Comte de Grasse Chapter of the Daughters of the American Revolution at Yorktown. She reveled in the chance to indulge her passions for Broadway shows, the theater, jazz and, most of all, international travel. Starting with a trip to the Soviet Union and Finland in 1988, she became a world traveler, researching and planning trips to Ecuador, Turkey, Germany, France and the Netherlands, to name just a few. She also traveled to see family, spending time in California and Florida every winter and visiting Yellow Springs and the Chicago area frequently.

A celebration of her life will be held June 20 at her daughter Rose’s church in Elmhurst, Ill.