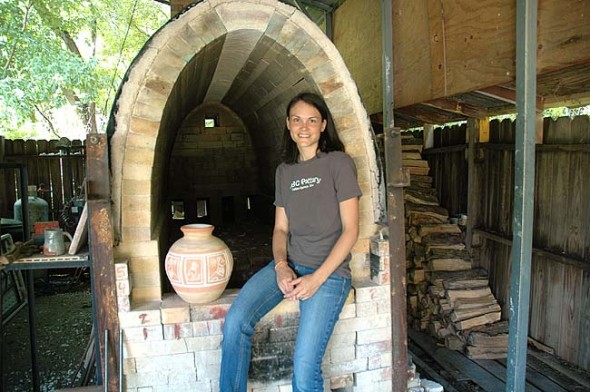 Though John Bryan Community Pottery has become a household name in the village in its 40 years, it’s highly unusual for a town this small to have a community ceramics center, according to current Director Krystal Luketic. The local pottery is the only one like it in southwest Ohio, and is one of probably only dozens in the country that offers a gas reduction kiln and a wood kiln, as well as space to rent and a public education mission.

“It’s a unique place and we wanted to keep it in the community and help it grow,” Luketic said.

John Bryan Pottery took a big step toward that goal by finally incorporating as a nonprofit organization. Former JBCP Director Lisa Wolters began the process five years ago and laid much of the groundwork toward tax exemption. However, the focus of intervening directors Dianne Collinson and Allison Paul, who are both active potters, was on growing programs, Luketic said. But as one of the pottery’s first directors with very little background in ceramics or art in general (except that her husband Geno Luketic is a professional potter and ceramics teacher), her focus as an economic development specialist the past year has been to complete the 501(c)(3) application so that the pottery can receive grant funding as a nonprofit organization.

Luketic credits the JBCP board of Roger Reynolds, Jeannamarie Cox, Sheryl Kostic and Denny Eagleson, some of whom guided the Little Art Theatre to nonprofithood in 2009, with helping to navigate the bureaucracy of the Department of Taxation. And she has plans for the studio.

Her first goal is to find a grant for about $20,000 to build a new reduction kiln. She also aims to find operational grant money to turn both the director and the studio technician (currently Brad Husk) positions into full-time posts. She also hopes to find support for resident artist Barbara Anderaos, a Brazilian potter who works with found materials and ash glazes.

The Village owns and maintains the JBCP building, and the pottery rents the space out of its $37,000 annual budget, a situation Luketic said is a boon for the health of the organization. The pottery generates most of its income from classes, user fees, and its 21 renters, one of whom is from Yellow Springs and the rest from as far as Dayton, New Carlisle and Woodstock, near Marysville.

“People drive here from all over because it’s so unique,” Luketic said, putting JBCP on par with Baltimore Clayworks, a public art studio that is slightly bigger than the village shop but offers the same range of services.

Summer classes start this week, including an intermediate wheel class by local potter Justin Teilhet, a kids class with Eve Sturm and Husk, a basic wheel class with Sara Hawkins, and a wood ash glazing workshop with Anderaos. And with the studio’s own art shows, open studio hours, and family workshops, JBCP is busy enough to warrant additional support, Luketic believes.

“The goal is to make the pottery sustainable and better functioning and to update a lot of stuff that has been here for 40 years!” she said.