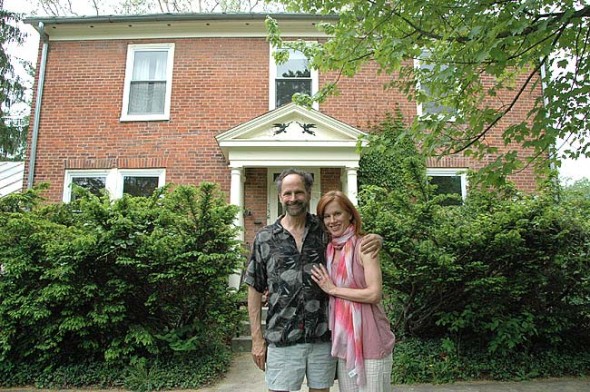 Bo Waite recently moved back into the West North College Street home his grandparents owned from the 1930s to 1960s. His partner Angie Bogner, a fitness trainer and teacher now working at the Antioch College Wellness Center, joined him from San Francisco. Waite, a Cincinnati psychiatrist, was the fifth member of his family to attend Antioch. (Photo by Megan Bachman)

Bo Waite has fond memories of visiting his grandparents’ house on West North College Street when he was a small child in the 1950s. There was a pasture with cows grazing behind the property, a garden tended by his grandfather, also the Antioch College maintenance supervisor, and the 1830s home cared for by his grandmother, a first-grade teacher at Mills Lawn.

A few years ago, some 50 years after his grandparents sold the house, Waite purchased it, and moved in last summer.

Waite, also an Antioch College graduate and the fifth person in his family to attend Antioch, is thrilled to be back in the village that informed his early life, he said in a recent interview.

“I’m still rediscovering it,” Waite of Yellow Springs, citing some draws: “The peacefulness, the quiet, the natural beauty of the Glen, the opportunity to be part of a community.”

As for the appeal of coming back to live near his alma mater, from which he graduated in 1972, it’s universal among his classmates.

“We’re all such radical romantics for Antioch,” he said.

Completing the Antioch circle, Waite moved to the house with his partner, Angie Bogner, a longtime health and fitness expert who is now a pilates instructor and personal trainer at the Antioch Wellness Center.

Bogner, originally from Cincinnati, moved to town after nearly 30 years in San Francisco, and finds the change refreshing.

“My nerves were just frazzled after 29 years of living in an urban environment,” Bogner said. Yellow Springs, meanwhile, is beautiful and serene with people who are “tolerant but polite” with “a total lack of aggressive rudeness.”

“It’s refreshing to say ‘hi’ on the street and see people who are not looking at their phones,” Bogner added.

Together, Waite, a psychiatrist still practicing in Cincinnati, and Bogner are reviving Waite’s grandfather’s garden.

“My grandfather was a horticulturist — he grew asparagus, concord grapes, roses,” Waite said. The same garden area, was also cultivated for decades by the late Anna Gregor when she lived there, and was equally “amazing,” Waite said.

Waite’s grandfather, Henry Chester Waite II, and his wife Genevieve, moved to Yellow Springs from St. Cloud, Minn. in the 1920s to follow the “town hero” Arthur Morgan, an engineer who flood-proofed Dayton before jumpstarting Antioch as its president, Waite explained. They originally lived in the house that is now the Yellow Springs Dharma Center.

“[Morgan] was the town boy done good,” Waite said. “So my grandfather came to go to the college the town hero had saved.”

The Morgan connection goes back even further; Morgan was a paperboy who delivered to Waite’s great-great-grandfather in the late 1800s. While Waite was at Antioch, he visited the aging Morgan, who remembered Waite’s great-great grandfather, recalling that he was “the only lawyer I knew who actually read books,” according to Waite.

Despite being the fifth member of his family to attend Antioch, Waite was the first who actually graduated. His grandfather dropped out during an economic recession to work to support his family with a job at a Xenia broom factory. His father, who was born in St. Cloud, but grew up in Yellow Springs and who died this spring, left Antioch to join the Navy before going on to medical school. Waite’s aunt attended in the 1950s but transferred to Ohio State. And his sister dropped out of Antioch after marrying an upperclassman.

Waite’s Antioch experience was during the tumultuous late 60s and early 70s, with frequent protests and student strikes. Half of his graduating class dressed up in the bizarre style of the Merry Pranksters, he said. But Antioch was seminal for him, especially his year abroad in Kenya that led to an interest in medicine. After Antioch he went to medical school at Louisiana State University and has spent his career practicing and teaching psychiatry. The 65-year-old still runs a private practice and teaches out of the University of Cincinnati Medical College, where his approach is influenced by a mindfulness practice and talking to people about their experience, not just prescribing medication.

“I was interested in people’s minds and psychiatry seemed like applied medical philosophy,” Waite recalled of his career decision.

Bogner, 51, was a trainer for nearly three decades at various gyms and health clubs in San Francisco, spending 10 of those years working as a trainer at an assisted living center. With a focus on core strength and balance training and a specialty in senior fitness, Bogner is quickly developing a clientele at the Antioch Wellness Center, where she hopes to add new classes in pilates.

Bogner is also working to become certified in TRE, or Tension, Stress and Trauma Release Exercises. Founded by Dr. David Berceli, the practice “activates a natural reflex mechanism of shaking or vibrating that releases muscular tension, calming down the nervous system,” and returning the body to a state of balance, according to the TRE website.

Bogner will soon be the only certified TRE practitioner in the state of Ohio, she said. The exercises are popular with returning veterans, but can also be used for anyone that suffers from regular stress and are based upon the idea that trauma is held in the body, Bogner added.

“[Berceli] realized early on working in war-torn countries that in the case of trauma it’s a physiological event,” Bogner said. “Everyday stress can also become an unconscious muscular pattern that will feel a lot like trauma.”