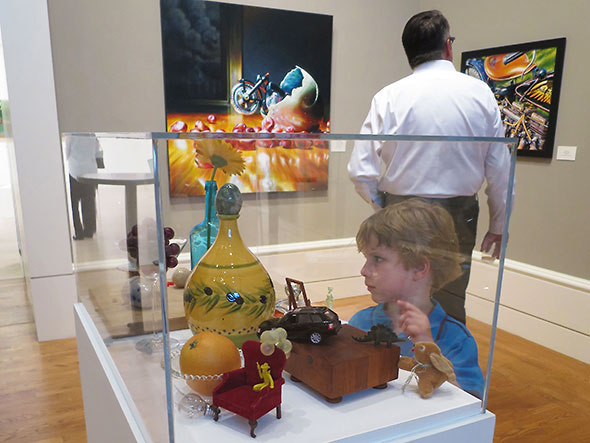 Now and then, my husband and I meet with an occasion where it may or may not be appropriate to bring our children. When faced with this dilemma, we’re inclined to let fate decide…resting our chances on finding a sitter. Last Saturday we had managed a solution that resolved our time constraints at least: Our eight year old daughter would have a play date with a friend until her 6pm call for the Saturday evening performance of The Farm; our five year old son would travel north with us to the Springfield Museum of Art for a special do-not-miss event starting at 5:30pm. 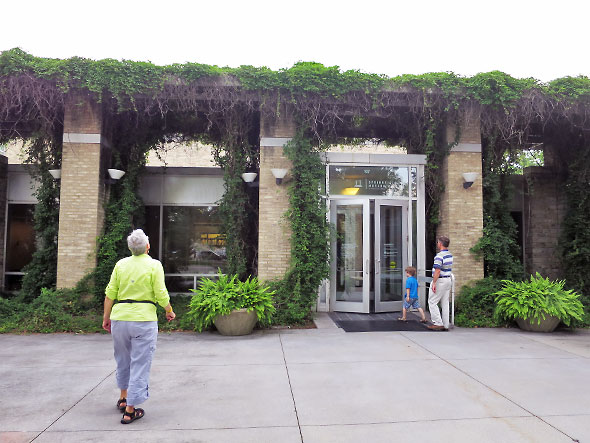 Jeremy and I arrive in good time at the museum with our young man. The special occasion is the opening of Full Circle, The Paintings of Jason Morgan, a new exhibit in the Randolf H. Deer Gallery. We check in at the front table and, as Jeremy gives our names, I take in the scene. To the right of the entrance are the refreshments, to the left are the galleries. Our son takes the initiative and, following the pattern of previous visits, leads our party right. A sizable crowd has assembled, and we fortify ourselves with nibbles until our son shows signs that he was ready venture forth. He takes my hand and marches resolutely to the Deer Gallery leaving his father lost in some reticence behind. 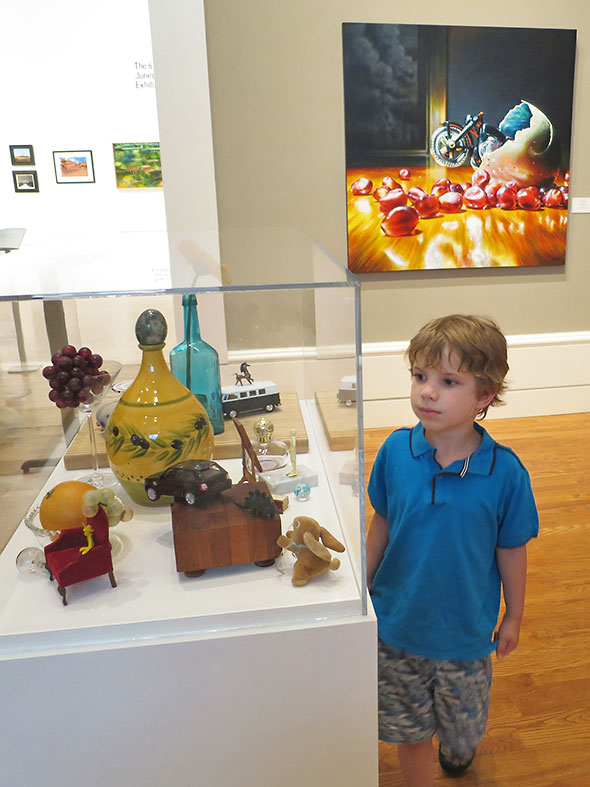 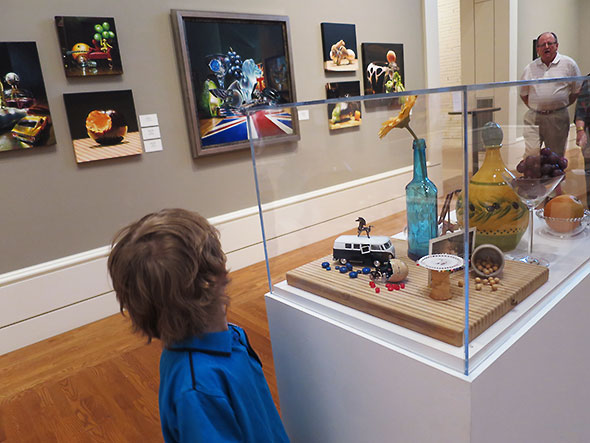 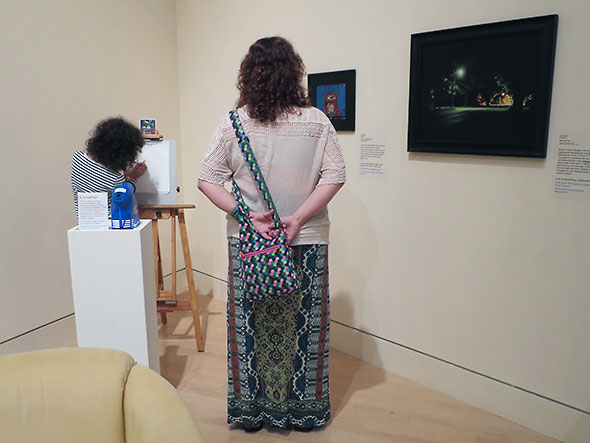 There are some artists whose work completely changes the mood of a room, whose impact you can feel as you cross the threshold into a space where light strangely prisms emotion. Jason Morgan is one such artist. His canvases often have dark backgrounds that seem at first to reflect the room you are in but in fact contain the dimensions of another deep tangible space. The subject of his paintings are a bold juxtaposition of everyday miniature objects blown up to the scale of human drama. These still lives seem hardly that; they vibrate with fierce tension and glow in the borrowed light funneled from all that surrounds them. 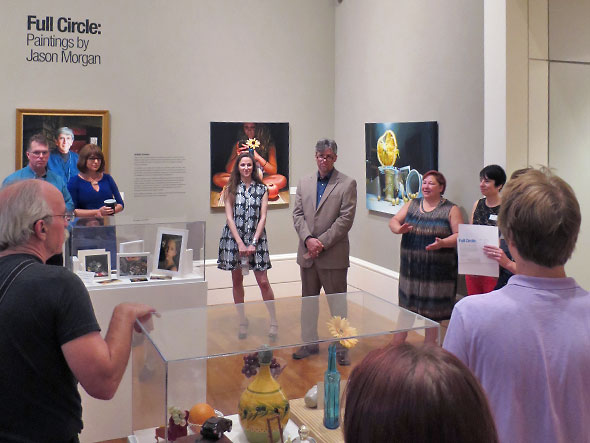 The exhibit features not just the paintings of Jason Morgan but his muses. Glass cases contain a menagerie of still life subjects…their physical selves and the photographic images that Morgan uses to lift the objects from their three dimensional forms and fold them into two dimensional canvas. My son responds to the paintings around him noting objects of special interest—motorcycle, dinosaur, blueberry, car—and then steps to the case of tiny trinkets. Here, he gifts me with a moment that shouts “Welcome, young man!” He leans toward the case intrigued by the toys prominent in the collection and then his eyes pop! He swings around pointing to the row of paintings behind him and says “These are there.” Spontaneously, he begins a treasure hunt matching miniature objects under glass to upscaled portrait stretched over cloth. 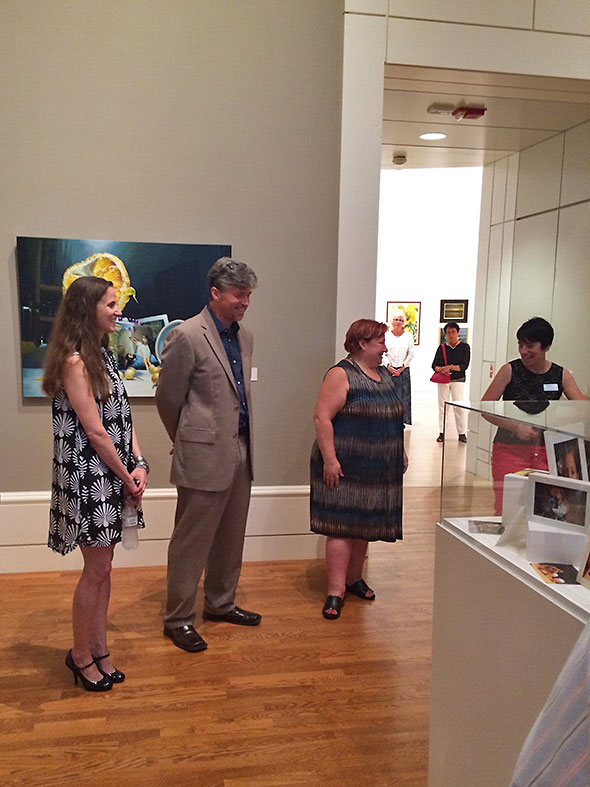 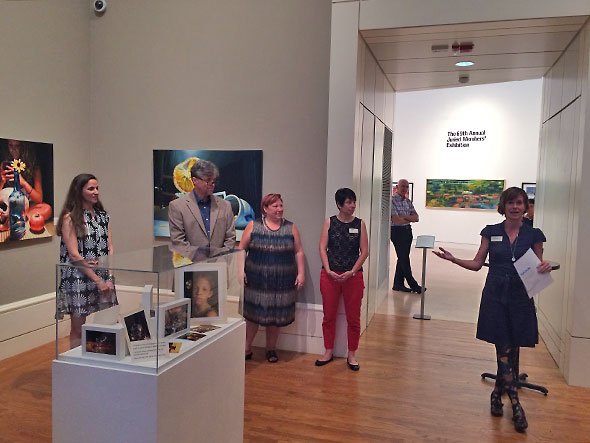 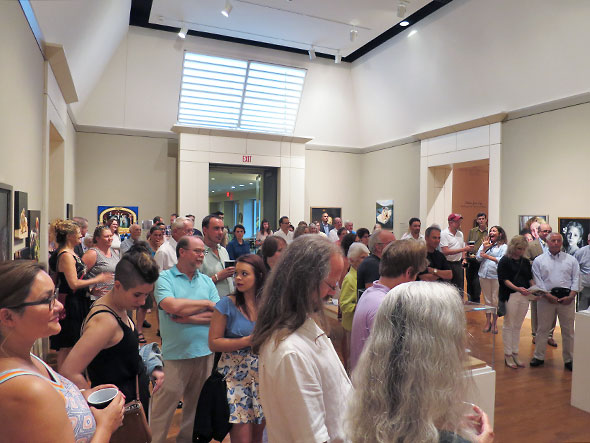 He exits the gallery to pull his hesitant father into the fun, but a voice is calling others into the gallery. The crowd fits itself shoulder to shoulder into the space, and Executive Director Ann Forescue and the Museum Operations Manager Eve Fleck introduce those gathered to Margaret and Jason Morgan. Curator Deb Housh steps forward next to describe how she approached the Morgans about pulling together the exhibit. Their task was complicated by Jason Morgan’s growing reputation and success; much of his work is in the hands of a diverse band of art collectors. The museum formed a plan to borrow several works for the duration of the exhibit—11 July 2015 to 6 February 2016—and successfully gathered a eclectic set of 20 paintings. To the Morgans, the exhibit feels like a family reunion. 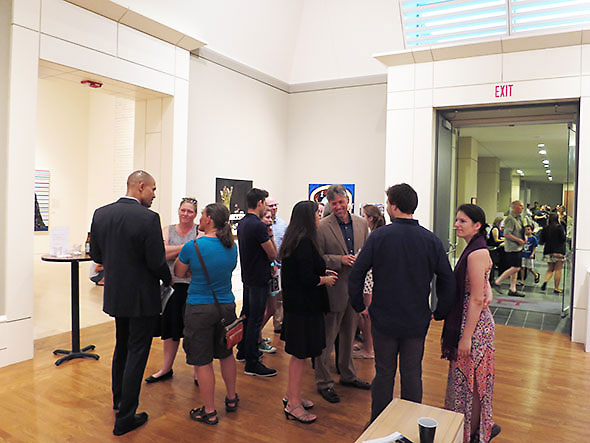 The room is filled with family, friends, and supporters, a great many from Yellow Springs where the Morgans now live. When Deb Housh turns over the talk to Jason Morgan, he has many people to thank and pleasantly surprises us by thanking Sherryl Kostic first. Kostic is the owner of Would You, Could You In A Frame, the gallery and frame shop on Corry Street across from the Yellow Springs Post Office. Morgan credits her with inspiring a shift in his artistic focus, a shift that contributed directly to the set of paintings surrounding us now. Kostic has featured Morgan’s work at her gallery for many years and, after taking in his landscapes and helping him connect with portraits commissions, she began to nudge Morgan to expand his subject matter. On this encouragement, Morgan mined his interest in antiques and curio—an interest cultivated in his youth by his Grandmother Lil—and he began bringing Kostic the most striking still lives. Kostic was inordinately pleased and egged him on. 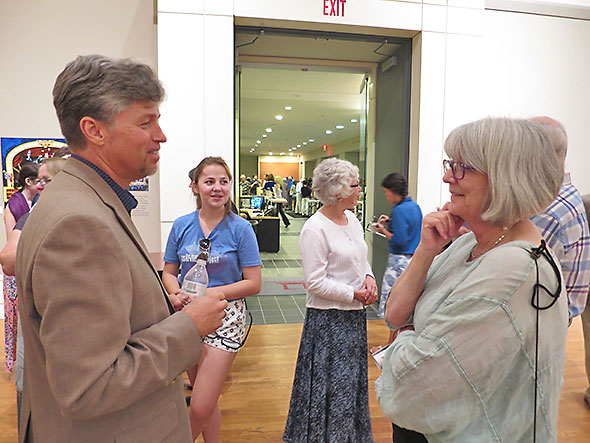 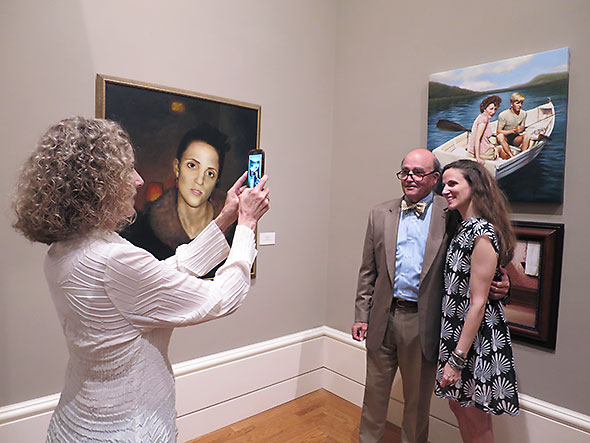 Jeremy and I were among many first introduced to Jason Morgan’s work at Kostic’s In A Frame gallery. We were drawn in early by a series of paintings that Morgan produced two years after moving to Yellow Springs and just around the time that Jeremy and I moved here ourselves. The paintings feature night scenes within the village. I was particularly drawn to a painting set from the perspective of South Walnut Street looking toward the blazing lights of the laundromat at Dayton and Walnut. The painting is layered in spatial references that, for me, reference time as well: the laundromat that I frequented in my twenties when I had no clothes dryer, the Corner Cone to which my one year old daughter would point me from the cocoon of her stroller, the garden fence of the property where my friend Ellen let me snip flowers for a community bouquet, the towering white sycamore tree that centenarian Lloyd Kennedy loves so well. My husband was drawn to a smaller painting from the same series of four paintings. His favorite depicted the perspective of driving through the tunnel that is tree-lined Xenia Avenue where it is about to emerge at the library and the lights of downtown. 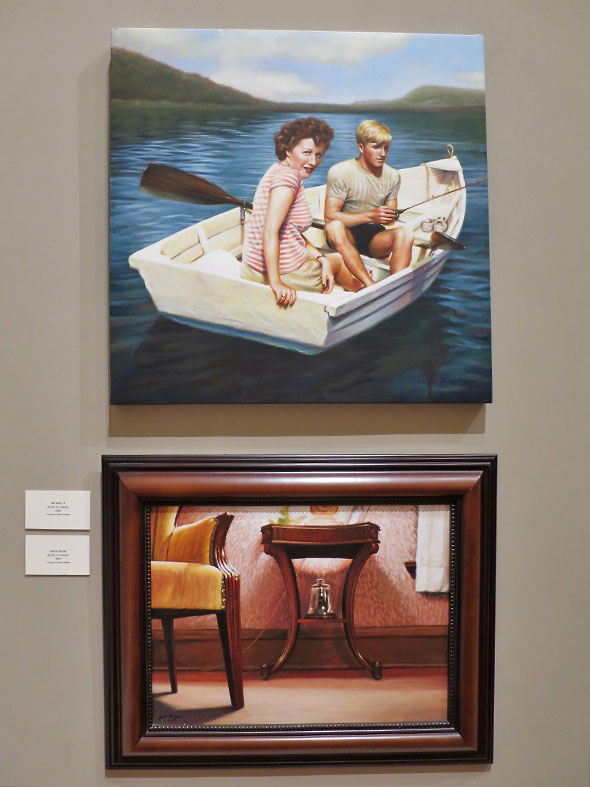 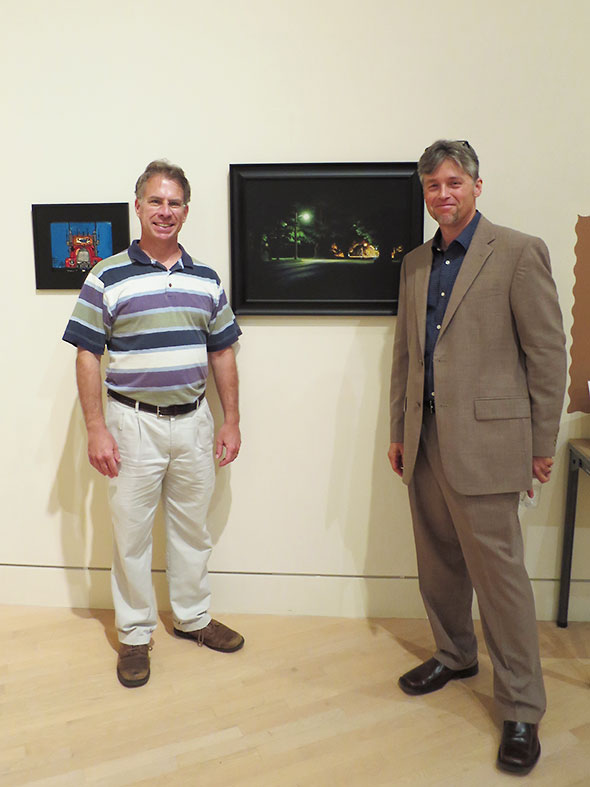 We wound up getting both paintings, the larger as an early Christmas present to the family and the smaller several months later for Jeremy’s birthday. The purchases seem at once indulgent and prescient now. Kostic shared the words of encouragement that she had given Jason Morgan and her faith in the impact of his present and future work. I had down-selected to a single painting in accord with Jeremy or so I thought but, as weeks and even months passed, Jeremy’s mind uncharacteristically returned again and again to his particular favorite. I’ve learned in our marriage to trust his excellent instincts, so we contacted Kostic and the Morgans through her to track Jeremy’s painting down. As a consequence of acquiring the second painting, Nightwatch (2007), Jeremy and I found ourselves among the art collectors approached by the Morgans and the Springfield Museum of Art to see if we’d be willing to loan a painting for exhibition. When we learned which painting they wanted to borrow, we teased them for asking after Jeremy’s piece—“Are you sure you want the smaller one? We have two.”—but, really, we were satisfied to have Jeremy’s instincts justified. 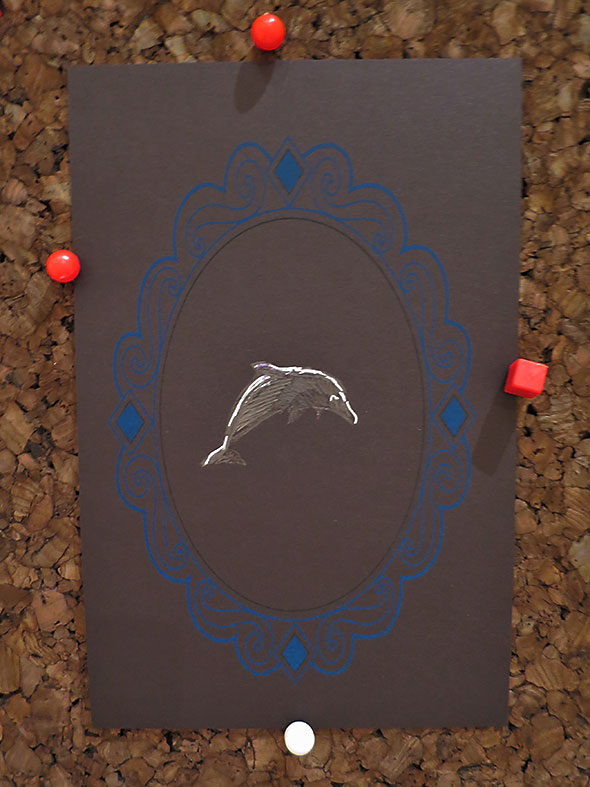 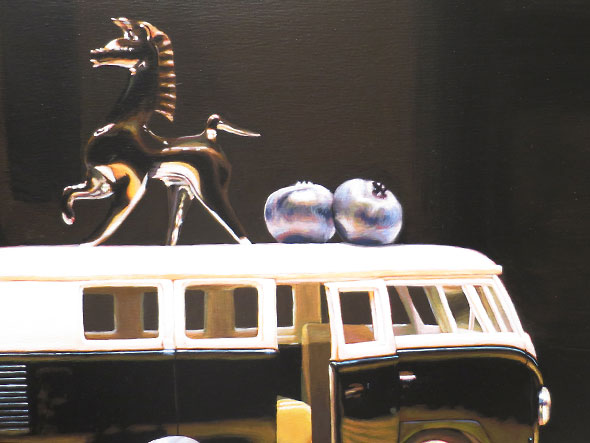 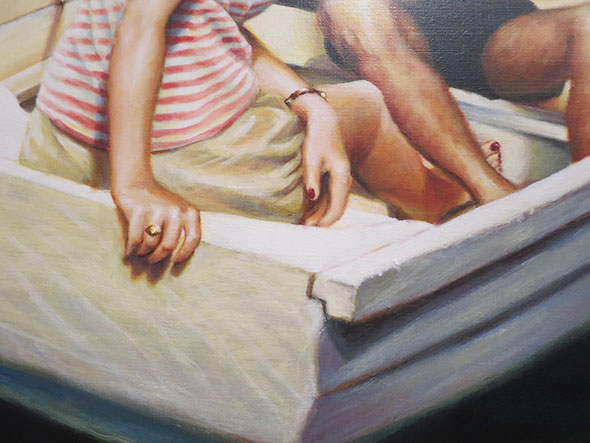 Aware of Jason Morgan’s more recent work, we’ve been curious about how our subtle landscape fits into the narrative of the larger exhibit. The contrast explains Jeremy’s earlier reticence at the opening. When our son was able to resume his treasure hunt with his parents, we found Jeremy’s painting in the Chakeres Interactive Art Lab along side a much earlier creation of Jason Morgan. In the lead up to the exhibit, Morgan’s uncle unearthed a picture that Morgan painted when he was ten years old. He had painted a Mack truck against a bright blue sky. The truck is hogging two lanes of traffic, and the cab of 18-wheeler bears down on the observer just as it crests a hill. Power lines frame the picture and give the painting a sense of depth and even motion. Next to Mack Truck (1978) hangs Nightwatch (2007). Both testify to Morgan’s early promise, excellent instincts, and accumulating skill and maturity. 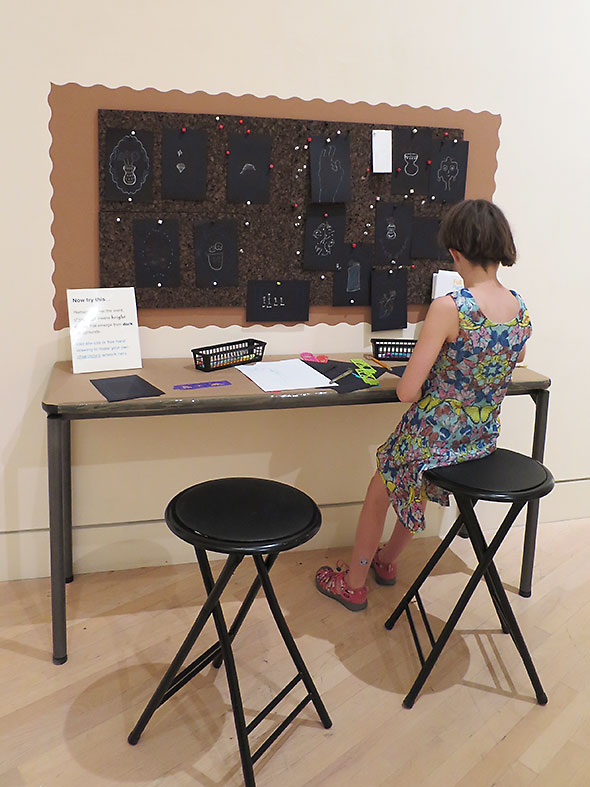 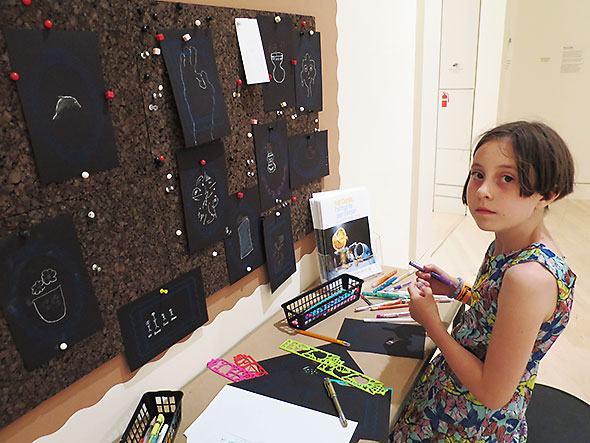 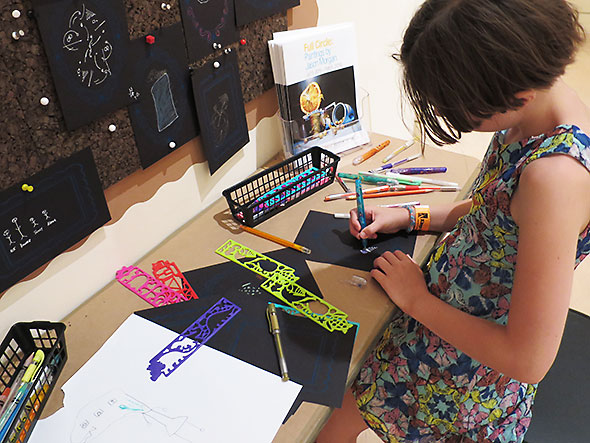 The interactive lab invites visitors to sit down besides these two paintings and try their hand at chiaroscuro. Italian for light-dark, chiaroscuro is a style of high contrast used by masters such as Rembrandt, Rubens, and Vermeer. The museum provides a helpful set of materials…black paper, white pens, and stencils…enough to get one started. The interactive experience gives one an appreciation for the effects Morgan achieves and the superior technique required to capture the interplay of multiple objects lit for high contrast and set in close proximity. His eye and paint brush attend to details such as the filtered spectrum of reflected light and the scattered facets and melting glow of everyday objects. Their outsized, extraordinary circumstance makes fanciful, evocative dreamscapes. 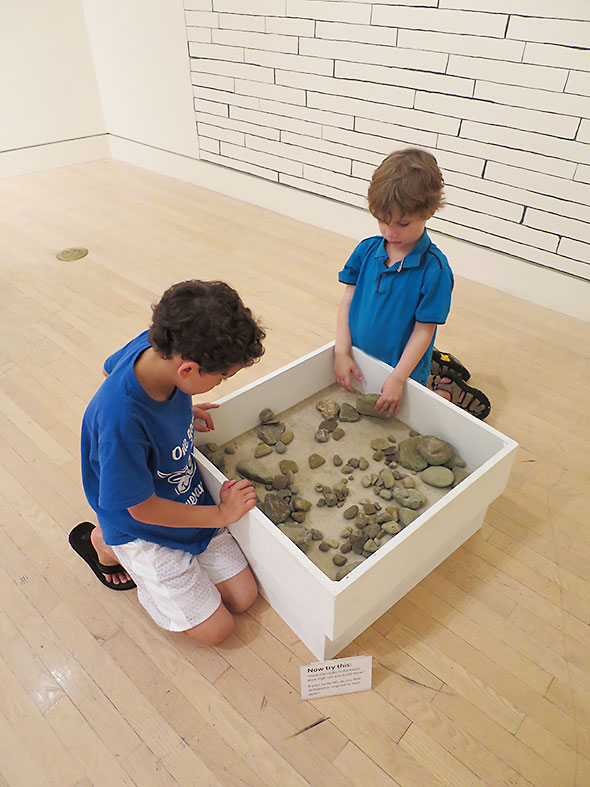 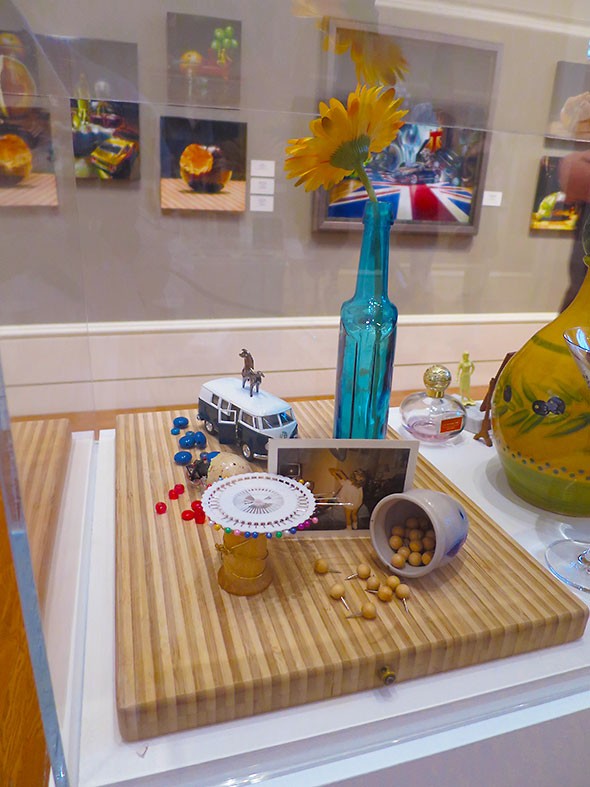 Full Circle casts Jason Morgan’s genius in high relief. Its layout records the resonating impact of his influences in accessible forum. I look forward to returning again as the exhibit continues for several months until 6 February 2016. It also will include two gallery chats with the artist, the first on Saturday 26 September 2015 from 2 to 3pm and the second on Saturday 9 January 2016 from 2 to 3pm. 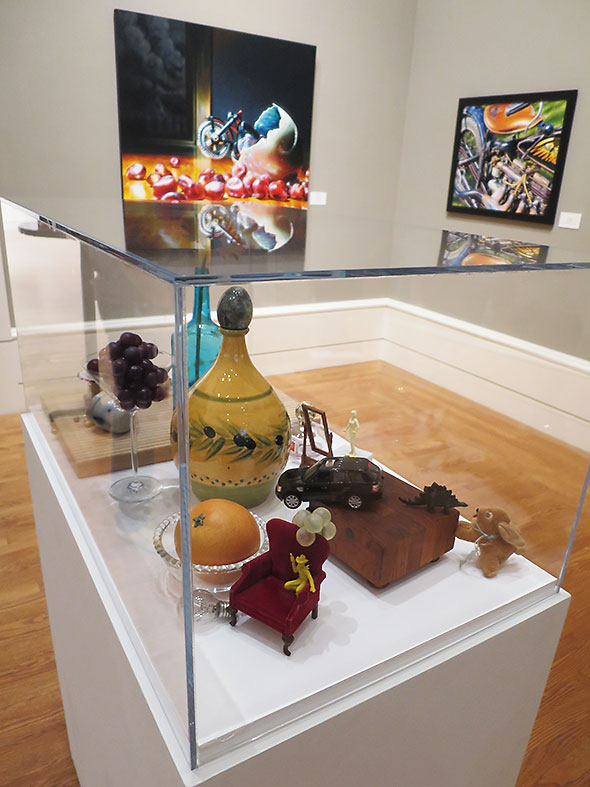 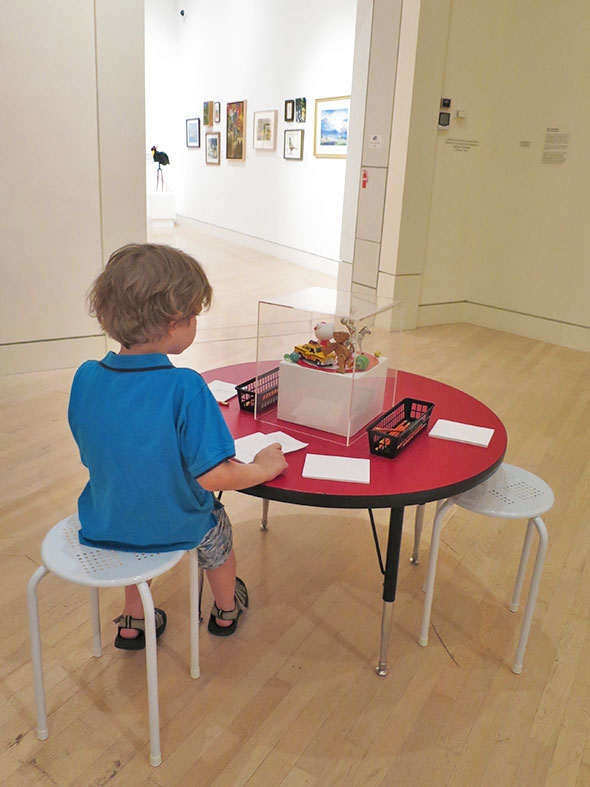 At the opening between the intervals of my own explorations, I touch base with my son and find him sitting at the various stations in the interactive lab. Often he appears industrious; other times he’s working out what objects he is meant to play with and what he is meant to observe. Being five, he’d rather play with those model cars wickedly tempting him from under glass but no matter. I am grateful to the museum…and to fate…for bringing my son to this place of intrigue. You have welcomed him with open arms, and he is pleased to stay and play.