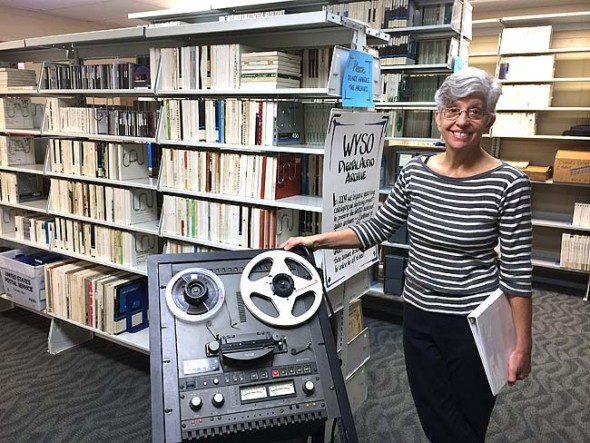 WYSO General Manager Neenah Ellis stood in front of more than 50 years of radio station archives, including more than 5,000 recordings on a variety of media. Last month WYSO released nearly 200 digital recordings online after a six-year project to convert and categorize them. (Photo by Megan Bachman)

The recently-released WYSO 91.3–FM digital archive features more than 200 hours of aural history from the 1950s to the 1970s, documenting the central role that Yellow Springs and Antioch College played in the national civil rights, women’s rights and anti-war movements as well as the rock n’ roll and folk music eras. It’s now accessible at http://www.wyso.org/archive.

Turning the moldy, deteriorating reel-to-reel tapes found in a damp storage room at WYSO into crystal-clear digital recordings available online wasn’t easy. It took six years and more than $100,000 in grant money to digitize, catalogue and post the initial batch of recordings, which represent less than 5 percent of WYSO’s archive of 5,000 tapes, cassettes, floppy disks, DATs, minidisks and CDs, according to WYSO general manager Neenah Ellis this week.

“When we found the tapes I realized we needed a miracle to get these saved,” Ellis said, adding that the process of preserving history continues.

The miracle to save some of WYSO’s most crucial recordings came in the form of a Congressional grant pilot program called the American Archive, which WYSO applied for and won, along with 20 other public radio and television stations across the country. Ellis said she “thanked the radio gods” for the chance to preserve local civil rights history, especially since WYSO was the smallest station to receive the funding. The grant has since been discontinued.

“We submitted 200 tapes for approval and we hadn’t even listened to them,” Ellis said. “They approved all 200.”

At the time, the tapes could not be played at the risk of ruining them, so WYSO employees had to sort by tape labels and program guides. On one tape a 1973 Yellow Springs School Board meeting is taped over by a Watergate special. Another simply says “Bob Dylan house party 1962.”

The archive features music programs, documentaries, lectures, concerts, poetry readings and experimental radio programs. There is a Black Panther Party Seminar, a concert about the struggle of Asians in America, an interview with Arthur Morgan, interviews about the Kent State shootings and Gegner barbershop incidents, recordings from the 1960 Newport Music Festival, programs about the Weather Underground and a faculty protest of the 1973 Antioch student strikes, and a weekly women’s program from 1969 called “Sisters, Brothers, Lovers Listen.”

The archive, available to the public since mid-June, has already proven valuable in the work of Jocelyn Robinson, a WYSO fellow who produced Rediscovered Radio over the last year. Using an Ohio Humanities Council grant, the series explored the area’s civil rights and social justice history using the archive, and recently received a first-place award from the Public Radio News Directors organization in the category “Series – Small Newsroom.”

Another series on the Vietnam antiwar movement is planned, while the archive has “endless possibilities,” Ellis said.

“It has a million uses,” Ellis said. “There are endless possibilities for us to create stuff, for students, for scholars.”

The archive is hosted by the Greene County Public Library, and Ellis thanked Karl Colón, director of the county library, and Deanna Ulvestad, an archivist in the Greene County Room, for their in-kind support doing the painstaking work of categorizing the material. Audio recordings cannot currently be downloaded, and use of the material in documentaries and other projects requires prior permission from WYSO.

Ellis is also grateful to the Antioch College students working at WYSO since its founding in 1958 who took the time and care to preserve the material, some of which was personally recorded and some of which was sent from other stations.
“This collection is a beautiful glimpse of what was happening locally and nationally at the time and it’s thanks to the foresight of these students,” Ellis said.