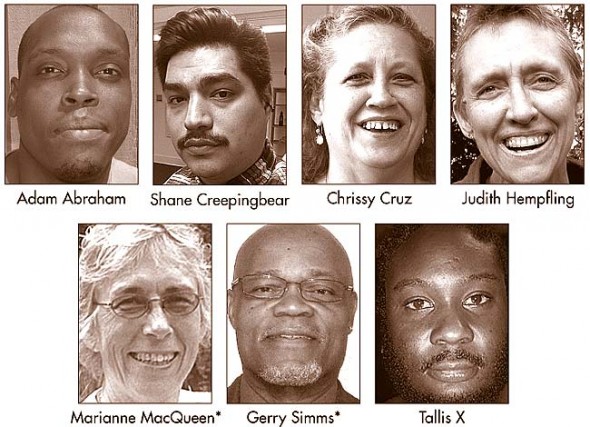 A week after the filing deadline for candidates, this fall’s races for Village Council and Miami Township Trustee look robust, while the school board contest is decidedly calmer, with no challengers for two incumbents. Election Day is Tuesday, Nov. 3.

Seven candidates turned in their petitions by the Aug. 5 deadline for three open Village Council seats, those currently held by Lori Askeland, Marianne MacQueen and Gerry Simms. MacQueen and Simms are running again, while Askeland, after eight years on Council, is not a candidate.

Two seats are open on the Yellow Springs Board of Education, and incumbents Sean Creighton and Sylvia Ellison, who are both candidates, face no challengers.

Longtime mayor David Foubert is running for his 13th term, with no opposition.

All of the candidates are considered unofficial until approved by the Board of Elections on Aug. 17.

In the Council race, Abraham, in an email this week, identified maintaining village diversity as a priority. While he sees a “multi-faceted approach” as necessary, the issue of affordability is central, he said. Working as the Americorps Vista staff member at Home, Inc. has provided him the opportunity to learn about housing issues, Abraham wrote, and “I think a renewed, emboldened commitment to affordable housing — both rental and home ownership — would go a long way in providing opportunities in the village.” A vital local economy and attention to wage and job opportunities also figure into the challenge to maintain diversity, he wrote.

Creepingbear is assistant director of admissions and multicultural recruitment and enrollment counselor at Antioch College. In an email this week he said he’s running to represent a group often not involved in local government, which is young people and families. “From that vantage point, I’m interested in addressng the budget, specifically as it relates to the ACE Task Force, housing for seniors and lower income residents, and progressive economic building, i.e. work co-ops and living wages.”

Maintaining diversity is also a priority for Cruz, a 40-year village resident who ran for Council two years ago. A self-employed baker and member of the Human Relations Commission, Cruz wrote that “I believe attracting new businesses and families to Yellow Springs is essential to sustainability but supporting the businesses and families who are already living and working here is the priority.” Identifying fiscal responsibility as an additional concern, Cruz wrote that “maintaining our infrastructure and keeping expenses under control is a priority and I believe we should be able to do so without sacrificing the amenities that our community offers.”

A self-employed landscaper and activist in the local Black Lives Matter group, Talis X wrote that “I’m focused on all issues but the ones that I am strongly focused on are policing in Yellow Springs and the housing and economy of Yellow Springs.” In a previous interview he stated that he believes the concerns of many villagers are overlooked by Council, and he wants the concerns of all villagers to be heard.

On her decision to run again for Council, Hempfling, who served two four-year terms, wrote that, “When I left Council, I regretted that we had not done more to support the health of the environment through land use and energy policy. I also regretted that more had not been accomplished to support affordable housing, to refashion police policy to more closely connect our police and citizens and better reflect the community’s priorities, and to reduce the police budget.”

In a previous interview, MacQueen, who has served one two-year term on Council, said she’s running again because she enjoys the work. Retired as director of Home, Inc., MacQueen identified environmental and sustainability issues as priorities, with other concerns being an interest in adding to the local rental housing stock, responsible budgeting, the development of the Glass Farm wetlands and the relationship between police and the community.

In a previous interview Simms, retired from Wright Patterson Air Force Base, said he’s running because he believes it’s important that minorities be represented on Council. Simms also stated that he doesn’t favor some issues over others, but rather will “take things as they come.” Simms, who has served one four-year term on Council, also stated that he wants to represent all villagers rather than the interests only of specific groups.

In the race for Miami Township Trustee, challenger Dale Amstutz could not be reached. However, when running for the position two years ago, Amstutz stressed the importance of having Township Trustees who live in the township — he has lived on a 160-acre Hyde Road farm for several decades. He would bring to the job a deep knowledge of agriculture and a concern for fiscal accountability, he said. Amstutz is running for the two years left on the term of the late John Eastman.

Hollister, a lifelong resident of Yellow Springs and Miami Township, stated in an email that he “will work to assure the rural character of Miami Township, primarily farmland and protected open space. This is the local expression of what I was recently working on statewide, protecting our agricultural base and unique conservation lands through the Clean Ohio Fund.” Hollister, who is running for a four-year term, also identified maintaining a high level of Township services, including the fire department and emergency squad, as additional priorities.

McQueen is a member of the Human Relations Commission, or HRC. He did not return calls seeking comment.

In a prior interview, Van Eaton Meister, a mental health counselor, identified a “passion for preservation” of farmland as a reason for seeking the office. She also expressed a concern that the Township officials make “intelligent changes regarding development.”

A former longtime Trustee, Spracklen was appointed earlier this year to fill the seat of the late John Eastman, who died at the end of 2014. Spracklen is running to fill the remaining two years of that position. He’s seeking the position because he wants to have a voice in selecting members of the Township Zoning Commission, Spracklen said in an interview this week. Specifically, he wants to see on the commission longtime Miami Township residents who have an interest in preserving farmland.

Mucher, who has previously served 19 years as a Trustee, said in a recent interview that he’s running because he believes continuity is especially important in this election due to important unfinished Township projects, such as the need for a new fire station. He is running for a four-year term.

The News will publish in-depth profiles of candidates for all races in upcoming months.