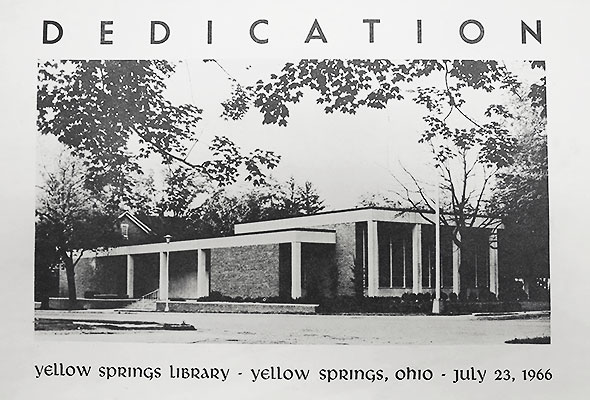 On Saturday 29 August, the Yellow Springs Library Association and the staff of the Greene County Public Library are hosting a celebration marking the 50th anniversary of the John F. Kennedy Library on 415 Xenia Avenue. The 1960s-themed event will start with storytelling at 11am and continue through the day with an antique car show, a fashion show, hootenanny, and golden oldies played by local band The Hoppers of Yellow Springs.

When I was a child, my parents would take my brothers, sisters, and me to the village library and walk us up the steps of the great Cady Mansion on River Road. We’d slip past the two-story columns of its grand fascade and, holding the front door handle with both hands, lean our bodies back to leverage the overside door open. Effort was rewarded. Inside was a grand staircase flanked by elegant rooms, each laced with interesting nooks and books stacked tantalizingly high. I loved the scent of the place, the slight funk of must. The card catalogue worked with a yielding flip, a crisp mix of handwritten notes and typewritten cards that reflected the varied styles among the helpful host of librarians. The Cady Library’s books told tales of their storied past. Unabashedly, I’d peruse through the names of past subscribers listed on the checkout cards tucked inside each volume and smile over common found ground. 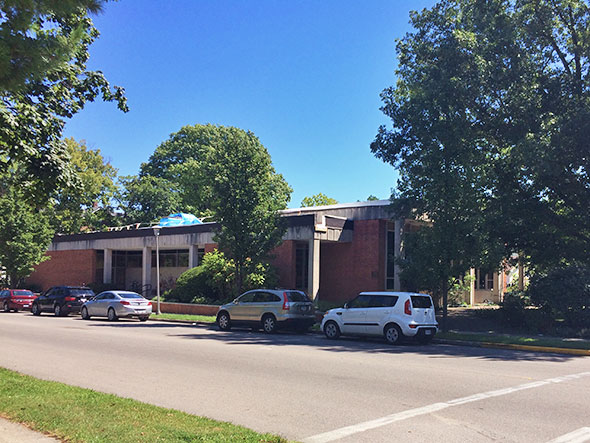 The library was sanctuary—meticulous order cocooned in long stretches of quiet—a well-tended garden seeded with intent and meant for ambling exploration. When I grew older and left my hometown, I’d hunt out the local circulation center and lose myself among its pages. The buildings themselves were contemporary more often than colonial, and I found myself drawn to the clean lines and tweedy textures. I’d fold myself into a library’s form and function enjoying the practical beauty of its furnishings. 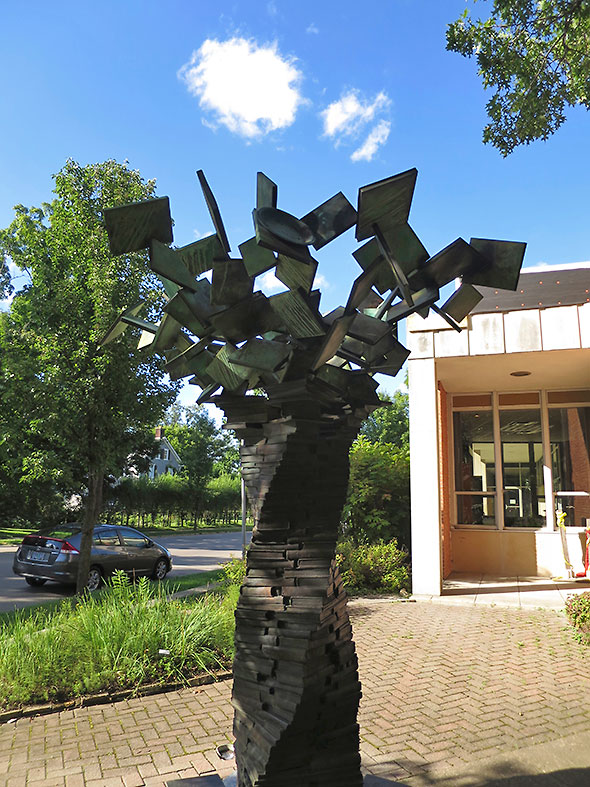 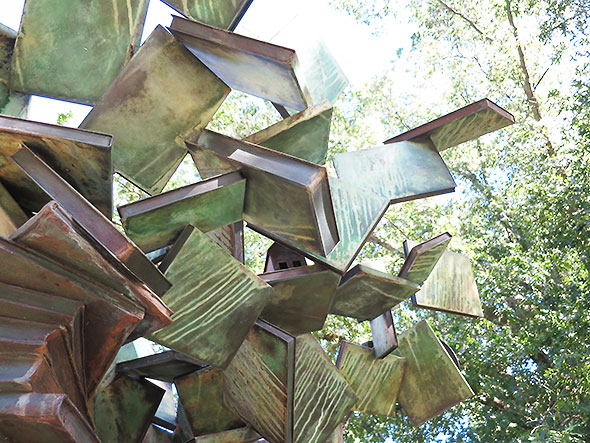 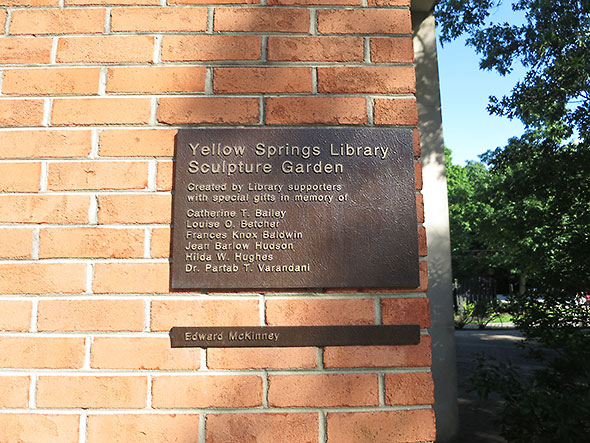 When I first moved to Yellow Springs in the spring of 1994, I took myself to the library and was more than charmed. I fell in love with the Tree of Knowledge planted by Jon Barlow Hudson just two years before. Cast in bronze from molds of texts, the sculpture spirals out of the ground with great vigor, a unquenchable torch of restoration and promise embracing road-weary travelers and earnest innocence alike. 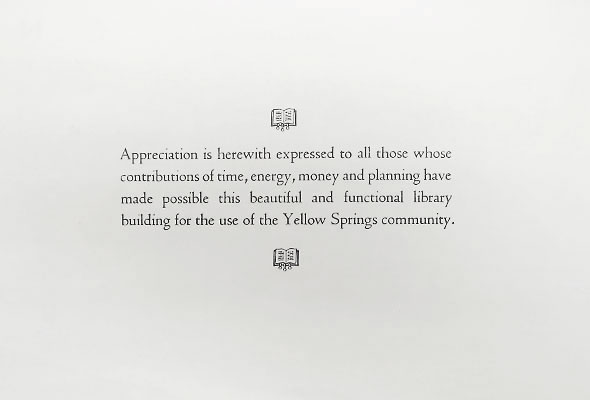 The library itself was a contemporary born just two years before myself. Christened the John F. Kennedy Library, the building was constructed in the mid 1960s using community donations. The capital campaign was spearheaded by the Yellow Springs Library Association and boosted by the Junior Chamber of Commerce. In partnership with the Yellow Springs Library Association, the village purchased a sizable lot—formally the site of an apartment building and craft store—from Mrs Alice Folck in the summer of 1963 and secured access to the alleyway between Glen Street and Davis. Then, December 1963 mere days after President Kennedy’s tragic death, the Vernay Foundation presented the local library with a gift of $100,000 to commemorate the fallen president. In all, the capital campaign netted $225,000 for construction and additional funds for the building’s furnishings.

Prominent on Xenia Avenue, the JFK Library distinguished itself from the stone building that it replaced on Walnut Street. Beautiful as it was, the stone library on Walnut was busting at the seams with material and patrons testing the bounds of its 9,000 book capacity and limited seating, all of 14 chairs and two benches. The John F. Kennedy Library opened its doors on 30 August 1965 to a eager supportive crowd waiting outside. The new building boasted three entrances, a eastside parking lot, and a southside garden. Inside was space for over 14,000 books, ample patron seating, two bathrooms, a community meeting room, and a wall of south facing windows that flooded the library’s great room with natural light. The staff had a banner opening day lending 722 books to library members…well above the branch’s already impressive average of around 200 books per day. 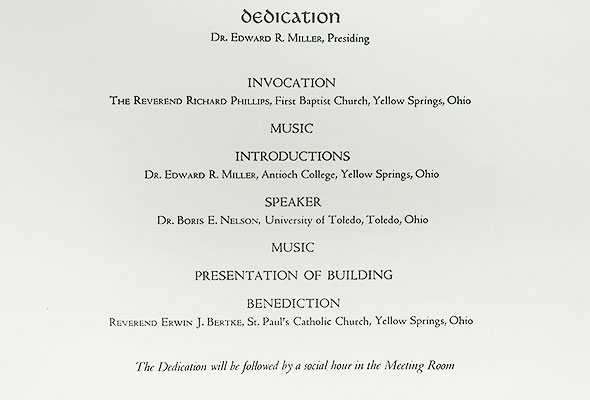 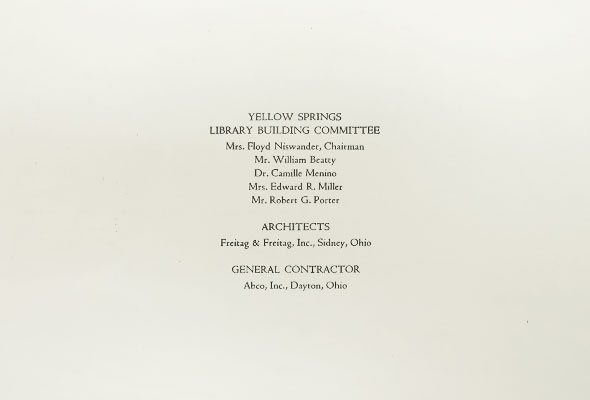 Villagers were hungry for a more open community space and healing, and the library reflected that need. President Kennedy had been assassinated in November of 1963, unsettling the nation, and as 1964 progressed the civil rights struggle tested the cohesiveness of the local community. The fieriest test came when local barber Louis Gegner refused to cut the hair of Paul Graham, an African-American villager. As the civil right’s violation worked its way through the courts, protests organized outside the barbershop. A local judge attempted to curtail the protests deferring to the inconvenience of commerce over the inconvenience of discrimination. Students from Antioch College, Central State University, and Wilberforce were understandably indignant and defied the judge’s injunction in an act of civil disobedience. They staged a massive sit-in downtown, and police wielding rubber hoses and tear gas arrested 108 protesters in one of the most unsettling events of Yellow Springs history. 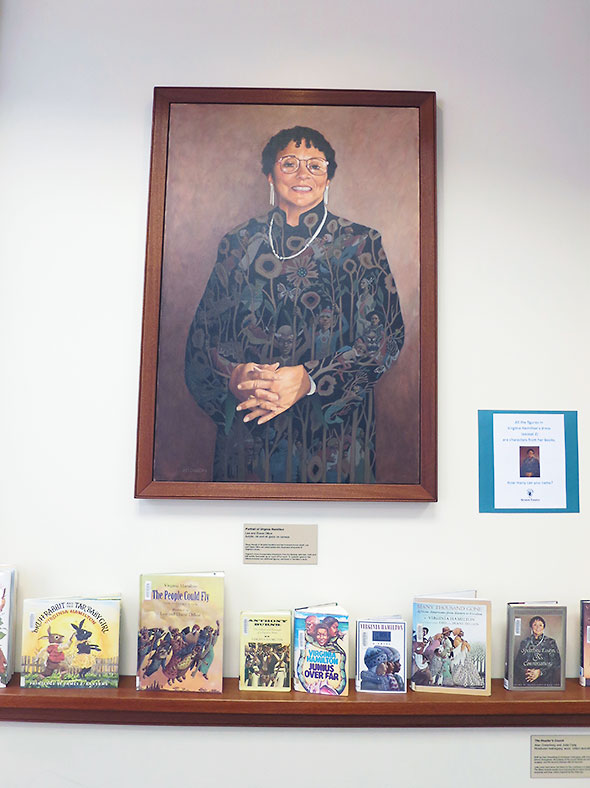 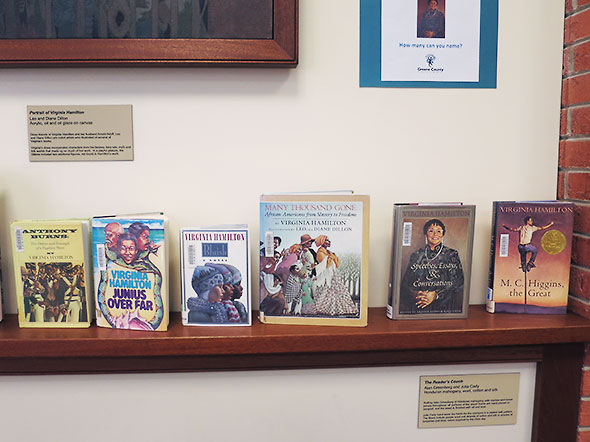 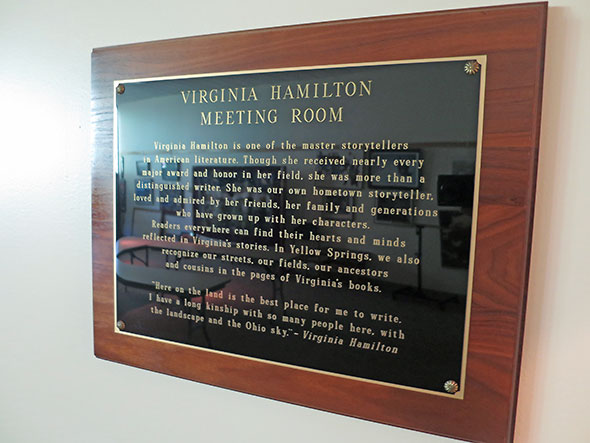 Many community members hoped at its dedication that the new library would prove more than sanctuary from the unsettling unquiet but an active resource in the process of peacemaking and justice. Within its walls, the library commemorates the contributions of author Virginia Hamilton. One plaque in the children section marks her as the 1992 recipient of the Hans Christian Andersen Medal, an international award for influential children’s literature. Hamilton is quoted as saying her own purpose is to “mark the essence, the culture, the history and traditions of African Americans, and to present all of my readers with strong stories and memorable characters living their lives the best that they know how.” 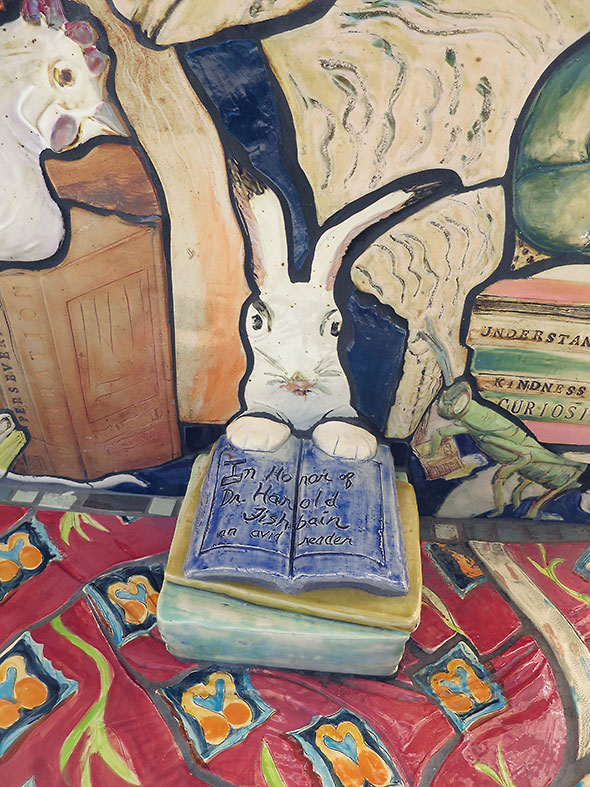 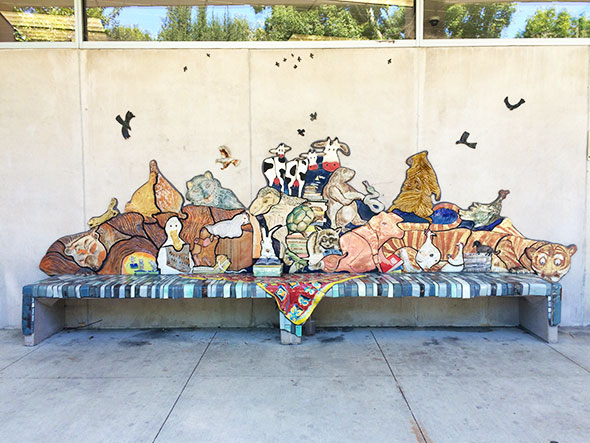 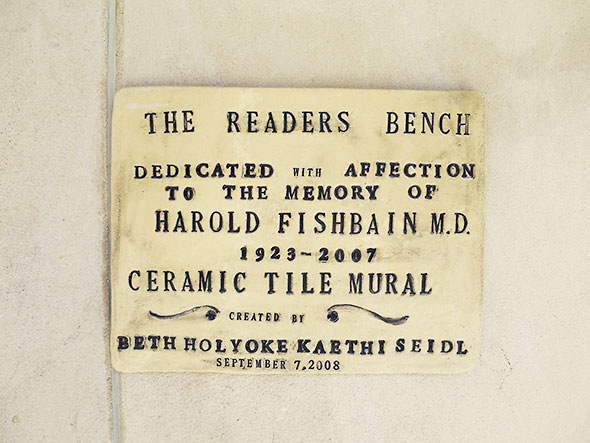 As the plaque reads at the entrance to the library’s meeting room, Hamilton was our hometown storyteller. Readers all around the world have grown up walking our streets and working our fields; they’ve forged a kinship with Hamilton’s people born and raised under “the Ohio sky”. The library honors readers as well as authors. Its front steps are adorned with a mosaic bench where animals from folktales and picture books listen as a duck reads a blue book dedicated to long time library patron Dr Harold Fishbain. Fishbain was a 27-year resident of Yellow Springs, family physician, psychiatrist, avid reader and storyteller, card-carrying Yellow Springs Public Library member, and pioneer committed to the education of mental health issues. The mosaic books created by Beth Holyoke and Kaethi Seidl contains stacks of books that speak to the traits Fishbain did his best to embody and model for others: Peace. Love. Laughter. Compassion. Serenity. Tolerance. Acceptance. He often found these at the library in both the literature and the community housed within. 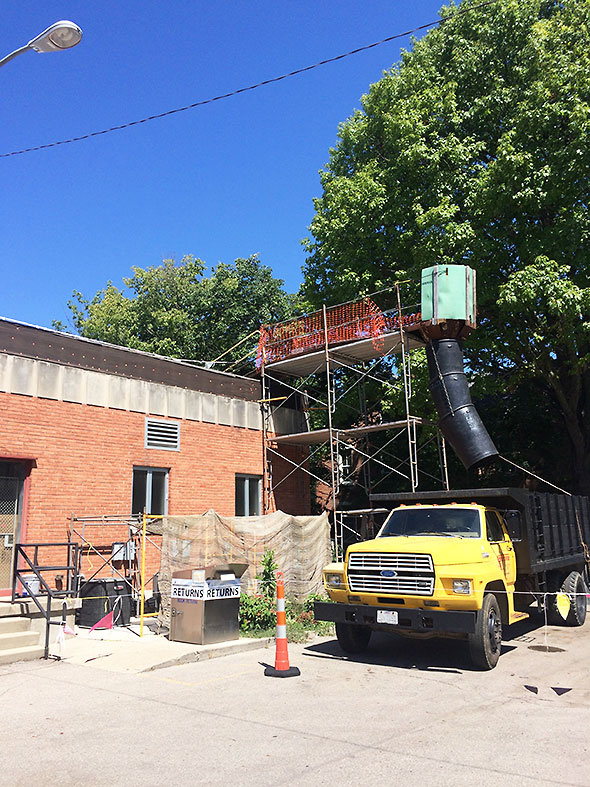 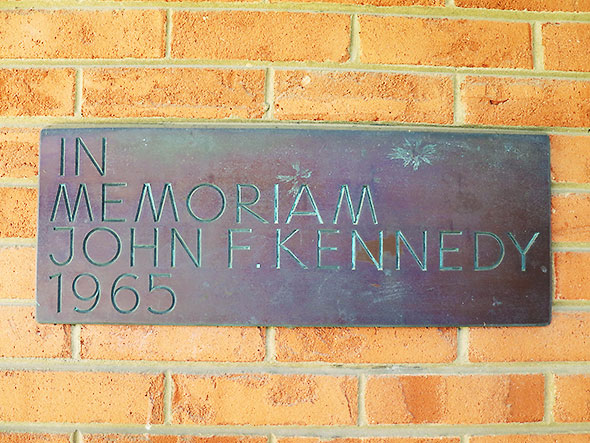 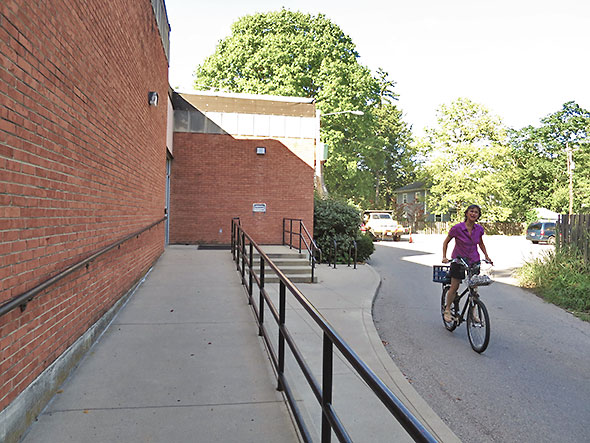 Much work remains. Public works require vigilance, a unwavering persistence to preserve the communal investment. The library building itself is undergoing maintenance. Still beautiful, practical, and well loved, the library is getting a new roof and power wash. Our social experiment also requires intense attention and revision. Downtown, the banner Black Lives Matter flies in vigilance reminding us how much. The editorials in the today’s papers read too much like those in Yellow Springs News during the mid 1960s on the subject of civil rights. Troubling debates still dare rage, pitching property rights against human rights.

Seeking a water-tight seal, the new roof at the library will be completed this summer. Like the initial building project, the effort is a joint endeavor of the Village and the Yellow Springs Library Association. We’ve much to be grateful for: the exemplary Greene County Public Library system and the investments made beginning over 100 years ago by the library association. May they persist and prosper. On that common ground, may they swing the arc of history to justice.