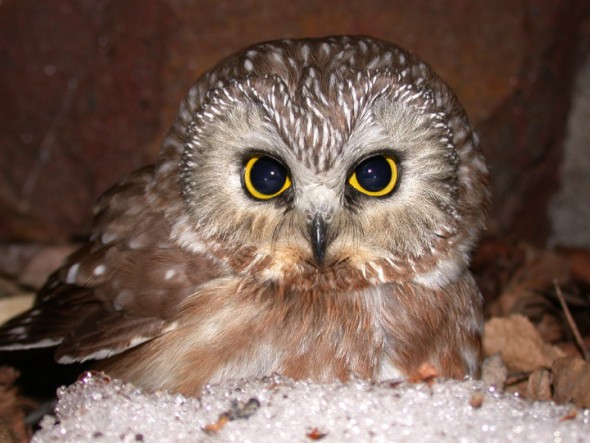 BLOG— Scenes from an interview

About a month ago, I bumped my little car down the gravel road off 343, headed for the Raptor Center. It was my first visit there, and the first time I’d driven — driven! — in the Glen. It felt all wrong, and three beautiful spotted fawns waited in the road to tell me so. I stopped the car, and they stood their ground. Hey, this is our place, they seemed to say, and I couldn’t disagree.

But then they whisked themselves, quick as thought or magic, back into the woods, and I bumped a few feet further to the left fork that took me to the Center. Betty Ross, the outgoing director, was waiting for me — like the fawns, but with welcome in her eyes. I liked her at once. She was brisk, bright as a bird in look and movement. We walked along the bank of cages that housed the nocturnal raptors — the owls. Our day is their night, of course, so “brisk”? Well, no. But the tiny northern saw-whet owl occupied its sleeping-cavity in a state of repose I can only describe as fierce. That bird was determined to get its rest.

The various hawks, peregrine falcons, kestrels, eagles and turkey vultures — the diurnals  — formed the second bank of birds. I peered at them respectfully, thinking of the lovely meaning a yoga teacher once ascribed to Namaste. “The light in me bows to the light in you.” Walking by, scribbling notes, I was inwardly bowing.

The turkey vultures, also known as buzzards, are no longer classed with raptors, Ross said. But once in the family, always in the family, and so these surprisingly sociable angels of death are grandfathered in. The cage that day held three dark angels — two turkey vultures and one black vulture, a smaller, boxier bird with sooty plumage and a bare, black head.

I thought of Mary Oliver‘s gorgeous poem, “Field Near Linden, Alabama,” which begins, “For hours / they float in the distance — / finally they drift down / like black shingles / from some old temple of the sun.” I thought, too, of a walk my husband and I took last winter in the Glen, how a dozen or more buzzards filled the whitest and tallest of the sycamores and floated down, in twos and threes, to some fresh death below, then back up to the trees to allow their fellows to take their turn at the feast. It was as solemn as any rite I’ve ever seen — and as orderly, too.

After the tour of the front cages, where the permanent residents live, Ross led me around to the rehab cages, which face into the woods. “There’s no public access back here,” she said. I knew to count myself lucky, and tread carefully. As it turned out, the cages were mostly empty — a sign of success. A number of birds, including an eagle, had just been released. Only one bird remained, an osprey brought in by a park ranger a few days before. He was huddled at the back of the cage. Between us and him lay the head of a fish. “He’s not eating it,” said Ross. The bird had “graduated” to the fish head, she explained, after several days of being tube fed.

She paused. I paused. Ross seemed to read my mind, or my raised eyebrows. “Yup, raw fish in the blender.” It was an ordinary kitchen blender, I saw later. Perfect for fish frappes! But the real revelation was still to come. “Better than rodents!” she laughed. Meaning: she’s done plenty of that, too.

Long white freezers line the back of the Center’s classroom, filled, I presume, with all manner of frozen dead. I say presume, because I didn’t have the guts — no pun intended — to ask Ross to unlock the lids and let me see. She would have done so cheerfully, I’m sure. The food is donated, she explained. The local Fish and Wildlife office provides some of it, mostly venison, culled from their evidence lockers. The image of the little beige blender whirred before me.

Being squeamish myself, I deeply admire the non-squeamish. Ross was clearly one of these; in fact, two of the four people I later interviewed for the story specifically described her as “not squeamish.” This attribute must be requisite, or quickly developed, in a job that involves handling mangled, sick and dying birds. Yet if a certain stoicism is essential to rehabilitation work, so, too, is compassion — the capacity to be moved. And everyone I spoke with highlighted this quality in Ross. As her former intern, Molly Finch, told me a few days later, “Anyone else doing this work for so long would suffer from ‘compassion fatigue.’ Not Bet.”

When she said that, I wondered about the relationship between the strong stomach and the deep heart. They must operate on different levels of sensitivity, I decided. But then I thought, Isn’t the toughness of not turning away from messy life the same act of tenderness that heals it?

The interview drew to a close. Ross had gotten two new calls about birds: a great horned owl had been found in Middletown, and an injured raptor, unidentified, had been spotted on Possum Road. Interns were arriving around us; I’d happened to interview Ross on move-in day. Everything was suddenly moving, changing.

No deer appeared as I left the Glen. Nothing but sunlight dappled the road. Where had I been these last couple of hours? I often feel like this after interviews: dazed and a little lost, so full of new information and impressions that I can’t quite locate myself. I find my way back, of course, but for a while I wear the drape of other lives like a wedding veil, or a second skin.

When I spoke to Ross’s successor, Rebecca Jamarillo, a couple of weeks later, I learned that the fish-shunning osprey had made an unexpected recovery. “We’re hoping to release it this afternoon,” she said. Geographically, the osprey still had a long way to go — it would winter in South America. Being released now, it had the best possible chance of starting the journey on time, healthy and well-fed.

This is compassion’s practical work, I thought. It’s food, it’s fish. It made an osprey strong. Just thinking of that makes me strong, too.

One Response to “BLOG— Scenes from an interview”