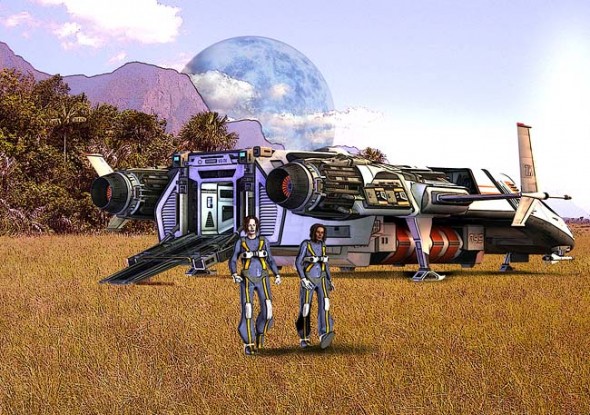 In the role playing game Stars Without Number, players explore alien landscapes and outfit themselves with gear befitting a space adventurer. The game blasts its way into the Yellow Springs Library every second Thursday, from 4 to 5:30 p.m. (earthtime). (“Landfall,” Illustration by David Reddington, from the game)

Twice a month in a back meeting room of the Yellow Springs Library, students gather to shed their earthbound identities and adopt the personae of psychics and mercenaries. They leave the confines of the Village to gallivant around space, embarking on a self-directed exploration of the universe’s stars without number.

The vehicle for this exploration is a role playing game called Stars Without Number. The game hearkens back to the classic mechanics of Dungeons & Dragons, in which players need little more than some unconventional dice and their imaginations. Each player creates a character with a set of attributes of their choosing, and the characters interact in the storyline that the game master — the narrator and arbiter — develops.

The SWN game master in this instance is one Keegan Chlanda, a 15-year-old sophomore at Yellow Springs High School. On a recent Thursday, Chlanda explained the game to new players, a high-schooler named Holly and her younger brother, and helped them develop their characters for a new campaign.

“There are different classes of character,” Chlanda said. “Everything from con artists to xenoarchaeologists.”

The players choose their alter ego’s fighting technique, language and history, and many other attributes. They also receive 900 credits to outfit their characters with the accoutrements of adventure: armor, weapons, pressurized tents, flares, food, and atmo-filters to contend with the many toxic planets in their sector of space, Chlanda said.
The SWN group at the library began a few years ago as a D&D group service project for the high school, Yellow Springs librarian Connie Collett explained. The crew lost its Dungeon Master and ultimately disbanded. Chlanda didn’t think the gaming should have to end and took it upon himself to start his own adventure, SWN.

Chlanda arrives at the library the first and third Thursdays of the month at 4 p.m. with his laptop and a sheaf of papers with the particulars of the game in session. The previous SWN game started in May and could have conceivably gone on forever because the story is open-ended.

The game master writes almost all elements of the story. Everything from the game’s worlds to its creatures and ships and weapons are fleshed out in his or her imagination. The game is effectively made up as it goes along: players arrive at junctures in the game and make decisions about what their characters and team are going to do, using rolls of unusual dice to determine the next part of the action.

The dice are called “polyhedrals” and have anywhere from six to 20 to 100 sides, the largest of which Chlanda said was “the size of a golfball that doesn’t stop rolling for like 10 seconds” once it’s cast. Landing on one side of a die might mean that your character successfully defends herself from some kind of mutant menace while another side means that your character suffers a bite and has to have her leg amputated. These outcomes foreclose another set of options, and so on.

The predetermined characteristics of armor and weapons augment the decisions made by the dice. Cryptic codes that are utterly baffling to this writer describe these combinations in a shorthand that only dedicated gamers are able to decipher. For example, an action in the game is delineated by this code:
1d20 + str/Dex mod + Enemy AC +/- Buff/Debuffs.

Despite the reserves of intelligence and creativity required to play them, games like Dungeons and Dragons have gotten a bad rap over the years because they involve characters like wizards and snarling demons, unorthodox playmates said to encourage players’ interest in the occult.
Monika Werling, Chlanda’s mother, doesn’t see it quite like this. She spoke about the positive aspects of the game and its effect on the players.

“It’s a multigenerational game — he works well with older and younger kids,” she said. “He can see when other kids feel introverted and he draws them in. He’s stepped into a leadership role.”

Janet Ogden, the children’s librarian, said the game is clearly a team effort. It requires working together and dealing with consequences, she said, and it stretches their imagination to the limit.

Werling said that her son has been coming to the library since he was a kid. It’s a safe place, and the librarians know Chlanda and he knows them, she said.

“The library puts a lot of trust in the youth,” she said, which is why players are granted a significant amount of autonomy in organizing and playing the game.

And SWN helps keep her son on a schedule, Werling said. She explained that one time he forgot the game was taking place and went home, and two players came to his house and asked if the game was still going on. He dropped everything and rushed over to the library.

“As game master, he’s very responsible, even if he doesn’t see it like that,” she said.

Chlanda’s responsibilities included imbuing last Thursday’s game with tremendous detail. He relished the chance to mix the excitement of the game with his knowledge of real-life space phenomena. His interest in the science of the universe was partially inspired by the sci-fi games he likes to play.

Back in the meeting room, the players plunged into the game. The scenario was replete with explosions, escapes and rebels spray painting anarchy signs in the spaceport of a planet covered entirely by a city. They used the ship from the previous game, with the convenient explanation that the players comprising its former crew had disappeared, and “nobody knows what happened to them.”

“Actually, it’s a cooperative game so you’re on the same team,” Chlanda said.

The two players asked questions as the game developed, one happily munching on Mike Sells’ Puffcorn Delites and drinking soda. Holly opted for more peaceful resolutions to the action, approaching the story realistically with aims of cooperation and discovery over surfeit battling. Her brother, on the other hand, opted to run wild whenever he could.

“I would escape through the ductwork!” he said. “I would throw boxes at the enemies!”

A pivotal point was reached in which the health of Holly’s character was to be determined by a literal roll of the dice. “Please make a constitution check,” Chlanda said. “Roll the D20.” Holly rolled a 15, lower than she needed to remain healthy. “Okay, you failed. You’re now unconscious,” Chlanda explained.

Her brother laughed at her bad luck, vocal about the fact that he most certainly would have tried to fight his way out. But Thursday was just the beginning of their odyssey, and there will no doubt be many more narrow escapes and celestial journeys in the weeks to come.