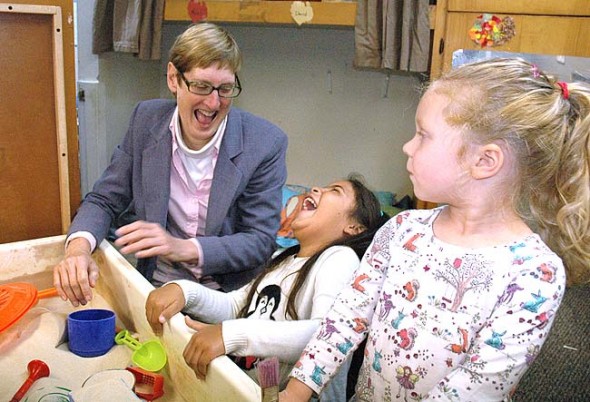 Mary Stukenberg, interim director of the Yellow Springs Community Children’s Center, “dug in” to her new job last week, with the help of Ella Fodal-McCray (left) and Lilly Brown (right). Stukenberg, a former teacher at the center, started in her new role on Monday, Nov. 2. Former interim director Karen Wolford was also asked back to help stabilize the center after Executive Director Rebecca Lowry, hired in July, left on Oct. 30. (Photo Audrey Hackett)

Four months after hiring a new executive director, the Yellow Springs Community Children’s Center is again without permanent leadership — but the center’s board has moved swiftly to pull together a credible interim team. Other changes, including new fundraising efforts, are also underway.

In July, the board hired Rebecca Lowry, a seasoned school psychologist and administrator, to head up the center after a national search. But Lowry left abruptly last month for a new position with a school district outside of Yellow Springs, according to Board President Amber Botkin. Lowry’s last day was Friday, Oct. 30.
“We tried hard to find someone with the knowledge and potential to drive change,” said Botkin last week, emphasizing the time and care invested by the board and community supporters in the search. “This is a really hard job to fill.”

The board immediately tapped former center teacher Mary Stukenberg to take the helm as interim director. Stukenberg began her new duties on Monday, Nov. 2. It was a turnaround for Stukenberg, who had left the center just two weeks before, in mid-October, after teaching there for six months. In an interview last week, Stukenberg said her departure was due to concerns over a cut in teachers’ hours from full to part time, a decision she felt did not serve the center’s children.

“I hoped that by leaving, the remaining teachers would be moved back up to full time, which is what happened,” she explained.

She was one of three employees who left the center in October for reasons having to do with sudden, substantial cuts to staff hours and rates of pay. Teacher Becca Mascola and kitchen manager Ila Peck also resigned, after one year and six months at the center, respectively. Both former employees said last week that they had been frustrated with a lack of communication and other issues under Lowry. Both voiced strong support for Stukenberg.
“I think hiring Mary as interim director is one of the best decisions the center has made of late,” said Mascola.

Leading and listening
The Children’s Center board turned to Stukenberg as the interim leader because of her “great rapport” with the center’s children, said Botkin, whose own son, Evan, attends preschool there, and because board members were already familiar with her résumé and ideas. Stukenberg, who has a masters in education from Vanderbilt University and 30 years of experience in education and human services, had applied for the executive director position last spring. She was among the candidates the board interviewed, according to Botkin, though Lowry was ultimately chosen.

“Mary has ideas and an obvious passion for the center,” Botkin said.

The board has also called back Karen Wolford, executive director of the Yellow Springs Senior Center, in a consulting capacity. She and Toni Dosik served as interim directors at the center from March to July, then gradually “stepped back” when Lowry came on board, Wolford said on Monday. This time, Wolford is returning solo “a few hours a few days a week” to provide stability and nonprofit management expertise during the transition. This past Monday was her first day in that role, she said. She expects to work with center leadership for at least four months as the board undertakes a search for a new permanent director. Wolford said she and Dosik were active in the previous search process last spring.

“I’m going to make sure that bills are paid, that operations are running smoothly and there are no gaps,” said Wolford, who has run nonprofits for 25 years. “I’ll look to Mary for the educational expertise that I don’t have.”

Stukenberg said last week — just nine days into her interim tenure — that her first priority was stabilization of the center’s teachers and staff and greater consistency in routines for the children. “This place has been rocky, and the children are feeling it,” she said.

Listening to the center’s teachers is key, she added. “I immediately had conferences with them to understand what the problems are, and what we need to address.”

There are currently four full-time teachers in the daycare and preschool portion of the program, and two teachers (one is currently on medical leave) in the afterschool program for school-aged children, which the center operates offsite at Mills Lawn School. Five other employees round out the center’s staff.

Enrollment has dipped to just 13 children in the daycare and preschool program, according to Stukenberg. The center’s facility is designed to accommodate 80 children, though it’s been several years since enrollment has been at that level. The Mills Lawn afterschool program has stayed more stable, she said. It currently enrolls 21 children.

“We do have a fabulous child-teacher ratio right now,” said Stukenberg. “Of course, we need to bring enrollment up, but the children are getting unbelievable attention.”

Persistent declines in enrollment were one factor in the previous board’s decision to dismiss the center’s last permanent leader, longtime Executive Director Marlin Newell. That shakeup, which began a year ago last summer, resulted in Newell being reinstated by a group of parents and, in response to the parental action, the wholesale resignation of the board. The current 10-member board was rebuilt in the wake of that challenging time, according to Botkin.

Stukenberg emphasized that the center has benefited from “fabulous parental support,” even as she acknowledged that some parents have opted for other childcare options.

“The parents who’ve stuck with us have weathered quite a bit. They’re strong people, great communicators,” she said.

On the morning the News visited, Stukenberg was bounding through the center, talking warmly to children and teachers and stopping to pet a therapy dog, a weekly visitor.

“It’s a wonderful facility,” she said, leading this reporter in and out of classrooms and pointing out the center’s multiple outdoor play spaces with equipment donated or assembled by community members.
“This place has everyone’s energy and efforts,” she said.

‘Refounding’ the center
That’s precisely what Botkin sees as an enduring strength of the Children’s Center, which was incorporated 70 years ago and has its roots in a pioneering program started by Lucy Morgan, wife of Antioch College President Arthur Morgan. “It has a legacy in the community. Almost everyone has a connection to it,” she said.

She acknowledged that the center has serious, ongoing challenges. But she said she’s frustrated by rumors and misperceptions that the local institution is on the brink of closing. Though it’s true that the center currently operates at a deficit, it is financially stable, she emphasized, thanks to donations from community members who have come forward with “incredible” support.

“We’re stable. We have the resources to continue our operations and continue making changes,” she said.
The board, which is meeting this week for the first time since Lowry’s departure, has a roadmap to guide the next six to 12 months. That roadmap is structured around three priorities, said Botkin: staff stabilization, development and training; building and grounds maintenance; and longer-term financial stabilization.
“What we’re really doing is ‘refounding’ the center — rebuilding it in a new way,” she said.

Asked about the center’s loss of its one star in Ohio’s Step Up to Quality voluntary rating system for daycare and preschool programs, Botkin said the center had failed to reapply during the leadership transition earlier this year. Regaining a star is a priority, but it’s only part of the board’s larger vision of developing teachers’ skills in order to provide excellent early childhood education, she added.

Community supporters Richard Lapedes and Maureen Lynch became involved with the center 18 months ago in part because of the “overwhelming evidence,” said Lapedes this week, that pre-K is the critical foundation for children’s educational and life outcomes. And they see the center as essential to Yellow Springs.

“We’re supporters of the Children’s Center and Antioch College and the K–12 system for the same reasons — they’re core institutions of our village,” said Lapedes. “Their vitality is what determines who comes to live and work in Yellow Springs.”

Lapedes declined to specify the couple’s level of financial support for the center, but he confirmed that they have consistently covered operations and other expenses over the past year and a half. Other community members have also stepped up to help, said Botkin.

Recently, the center held what it called a “friend-raiser” at Lapedes and Lynch’s home. About 40 people attended, Lapedes said. The board shared its latest capacity-building plan, which outlines the center’s activities, goals and needs. According to that plan, the center is looking to raise $110,000 for a variety of uses, the largest single item being $30,000 for improving teachers’ salaries. Other items include $25,000 toward refurbishment of the center’s infrastructure; $20,000 for staff and teacher training; $15,000 for ongoing staff coaching and support; and $10,000 each for marketing and upgrading computer and security systems.
Shoring up the center’s finances will require a combination of strategies, stressed Botkin, including increasing enrollment, invigorating development efforts, identifying grants and “figuring out the ideal mix of those three.”

Filling a clear need
Doing so is critical, she said, because the Children’s Center fills a clear need for local families. The website of Ohio’s Department of Job and Family Services, which licenses childcare programs, lists three other licensed childcare centers in the village: the Antioch Nursery School and Afterschool Program, the Children’s Montessori Cooperative (on the Antioch College campus) and the Yellow Springs Montessori School. A fourth local option for pre-K is the Friends Preschool Program, operated by the Greene County Educational Service Center, and open to students in the Yellow Springs and Cedar Cliff school districts.

Among those organizations, the Children’s Center is the only local institution that provides full week, full-time care, which includes two hot meals and snacks, said Botkin. And while other centers may offer scholarships or fee reductions, the Children’s Center is the only provider that accepts Title XX subsidies, a federal program that helps families afford childcare.

“The community understands the importance of the center and wants to see it succeed,” Botkin said.

“They’re all fragile,” said Lapedes, referring to the multiple childcare options in a village of just 3,500. “I believe there should be at least one strong institution that we can count on.”