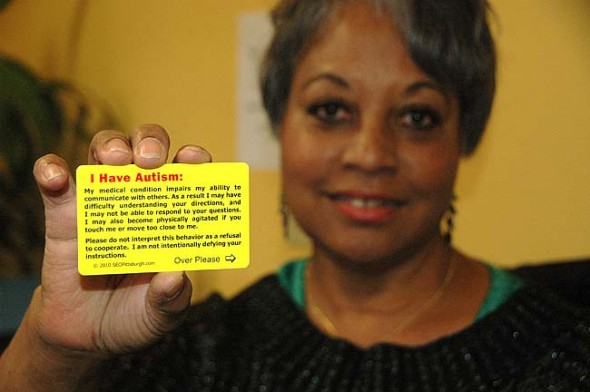 Mijanou Marretta-Lewis, a Yellow Springs resident and mother of two autistic boys, holds a card designed to facilitate easier interactions between people with autism and police. The cards explain why the bearer may have trouble understanding the situation, as police may not be aware of the sensitivities of people with autism. The cards are available at the Yellow Springs Police Department. (photo by Suzanne Szempruch)

Mijanou Marretta-Lewis, a Yellow Springs resident and mother of two autistic boys, described the hypersensitivity of her sons’ brains. It’s very difficult for them to filter out extraneous sensory noise, she said. Common household sounds like buzzing light ballasts and furnace noises can seem like an overwhelming din.

“Hear the fishtank burbling?” she asked. “My son hears it as a roar.”

Her sons’ hypersensitivity can be exacerbated by stress, which in turn can manifest itself as inadvertent aggression or an inability to understand directions. For this reason, Marretta-Lewis worries about the outcome of an interaction between her sons and police.

“If a police officer is giving commands, it might as well be in Greek,” she said.

Non-compliance, while totally unintentional, could be construed as resistance, which in turn may provoke a forceful reaction from the officer. Police may not be aware they are dealing with someone who is “profoundly autistic,” she said, and therefore they may not know how to address the situation appropriately.

Both of her sons are tall, strong and biracial, factors she worries will exacerbate the tension of an encounter with police. One of her sons is nonverbal, and sometimes the frustration of not being understood can manifest itself as physical aggression, she said. He also has grand mal seizures, and so Marretta-Lewis is terrified he’d be tazed.

But Marretta-Lewis recently came across something that she feels may help de-escalate such encounters. A friend told her about a small yellow card that identifies the bearer as autistic and describes in clear language why the bearer may be having trouble communicating. The idea is that the card can be presented to a police officer or emergency responder to encourage an appropriate response.

“I have Autism,” the card says in part, “I am not intentionally defying your instructions.”

Marretta-Lewis recently brought the cards to the attention of the Yellow Springs police. The police in turn ordered 25 cards to distribute in the community. As of last week, the cards are available at no cost to anyone who needs one, at the front desk of the police station.

“People who may have difficulty communicating now have a means to,” said Chief David Hale.

The cards were developed and marketed by SEO Pittsburgh, a company that is owned and run by people on the autism spectrum. The company “utilizes its [employees’] special talents of computer skills and linguistics” and offers search engine optimization services to a variety of clients. The idea for the card came into being after an Autism Speaks conference, where employees of SEO Pittsburgh heard a number of stories about negative interactions between law enforcement and people with autism.

Because she and her sons grew up in Yellow Springs, a lot of people in town know her family and look out for her sons, she said. She has had local police officers over to her house to meet them and her younger son’s aides. People in town know how to reach her if there’s a problem, she said, but this isn’t the case in Xenia, where her son works, or Beavercreek, one of his favorite destinations. The cards may be helpful in those situations, she said, as her son can take one with him and present it if he needs to. (There is also a space on the back of the card for a caregiver’s contact information.)
According to the U.S. Center for Disease Control, 1 in 68 people are born with autism (1 in 42 boys), a ten-fold increase over the past 40 years. There are currently around three million autistic people in the United States, and so it behooves officers to familiarize themselves with the sensitivities of people with autism, said Marretta-Lewis.

Very little information is collected on a national level concerning police injuring and killing of people with disabilities, according to the website disabled-world.com, either because of an overall lack of precise record keeping or a departmental reluctance to collect them. However, some stories in recent years attest to the tragic consequences of interactions gone awry. A year-long investigation into the Portland Police Department found that in that department tazers were most frequently used against people with developmental disabilities. In Los Angeles, the LAPD shot Steven Eugene Washington, a 27 year-old man on the autism spectrum, to death in 2010 when he reached into his waistband after being told to raise his hands. He was unarmed. And Eric Vassell, a 57 year-old autistic man, was killed by Miami Beach police in 2011 for carrying a toy rifle.

Marretta-Lewis said she wants to go to Xenia and Fairborn and other nearby cities to talk to their police chiefs about autism.

“I’m hoping that we can start a movement of some kind, where there’s conversation and talk,” she said. “This is my little contribution to the cause.”

The cards speak not just for concerns about the safety of her sons but the complexity of all aspects of their relationship. She is a mother who shoulders her sons’ frustrations, and aches to understand them better.

“I would give anything to be able to talk to them clearly for one hour,” she said. “What are you thinking? What do you want? What can I do for you?”