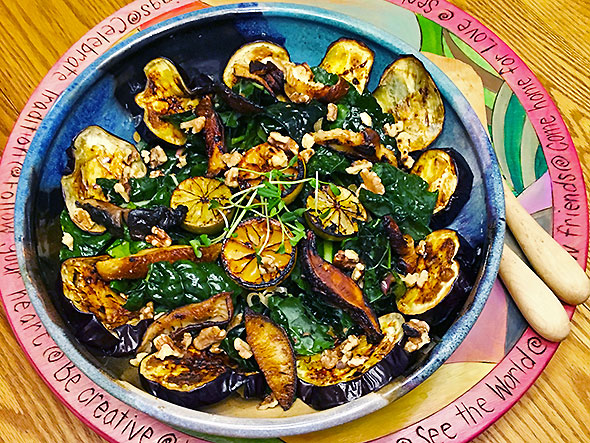 Last night I slept deeply and dreamed strangely. My husband woke me in the first hours of the morning. He was just slipping back to bed after a trip to the bathroom, a common generally undisruptive occurrence. He fell back asleep easily. Normally I follow him back to sleep as well, but something was amiss this morning. I might have blamed the rustling baritone note of his breathing, but the light snore was actually the pleasing sort of white noise that soothes. No, something else was going on. My body was actively processing—food, hormones, something—and my abdomen held a complex, ticking tension. Recognizing the deep root of my restlessness, I began a long practiced ritual.

I learned the ritual long ago when I entered the military through the Reserve Officers’ Training Corps. In the summer of 1987, the corps sent me to Denver CO for a four week training camp at the now closed Lowry Air Force Base. Edgy and ill with altitude sickness in the Mile High City, I was unable to sleep the first three nights at camp. The insomnia started eating into my performance, and the Colonel in charge of the encampment took notice. He spoke to me at the end of a two mile run in which I was noticeably dragging. I admitted my problem: a lack of sleep along with an inability to eat due to constant nausea. Concerned, he advised that I report to sick call in the morning. 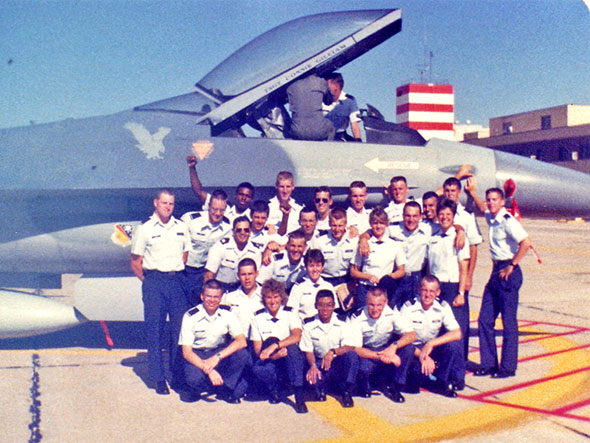 My roommate Sue Walts joined our conversation near its end. She reassured us both that she had a alternate solution. That night at dinner, under her counsel, I forced down a single hamburger and a glass of milk. Later, as we settled down for the night, Sue talked me through a relaxation technique that she had learned in her yoga practice. I slipped under the itchy wool blanket that the Corps provided and thought—as I do in moments of discomfort—of the most pleasant things I could. Ballet and balloons. Sue started at my toes and applied deep pressure asking me at first to tighten the muscles of my feet and then to relax them. “Let the muscle melt toward the floor,” she said. Nervous enough at everything else, I trusted her words. Letting go of awkwardness in the desperate hunt for sleep, we worked up the body: ankles, shins, thighs, hips, abs, fingers, arms, shoulders, chin, nose, ears, forehead, crown. The deep pressure and warmth of her hands combined with the contrast between muscle constriction and release gave me an awareness of the interlocking knots gripping my body. The exercise did much to release tension, but I had built up a huge store. We repeated the exercise twice and started a third time before I finally slipped the knot and sank into a content slumber. The next morning I skipped sick call and improved my 2-mile run time by 29 seconds. The Colonel checked in at breakfast where I was forcing down a reassuringly bland bowl of grits. I gave the glory to my roommate and, for the next several days at lights out, she talked me through the relaxation ritual…toes, ankle, shin, thigh, hip. I would be asleep in no time. 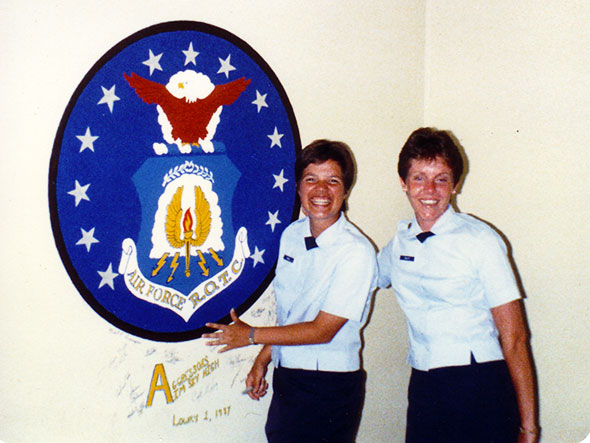 Relaxation I learned is an active, mindful process. Over the years I’ve modified the ritual by degrees. Now, instead of starting at the toes, I begin at the apparent source of tension. From there, I work the fairy knot of tangled fibers out.

On this early January morning, I alternated my attention between abdominal core and shoulders. I was able to sooth myself back to slumber but I was fighting something more than tension. It felt strange—unlike sickness—more like reprograming. That thought took hold and, as I entered the dream state, I joined a fanciful story in which everything that could be programmed—people, pets, and appliances alike—was being hacked and assimilated by a sinister force. Oblivious to encroaching danger, I met the master hacker, a distinguished doctor of internal medicine. His practice was a curious place of wrong way turns and unsettling staged setups. Under the guise of helping people, he shook his patients into a susceptive state. Entering as one of his new cases, I could have fallen under his spell as easily as others but, being deeply distracted and inclined to keep to myself, I proved immune at first. A bluish grey blush of infestation creeped over the land, and I sought refuge only to be overtaken again and again. Increasingly desperate to find sanctuary, I realized I should simply wake up. Only I couldn’t. Instead I dreamed of waking, lost in a labyrinth of overlapping alternate realities, all infected by menace. Overrun at last, I shouted for help louder and louder, reaching for my husband like a drowning woman, kicking off cover after cover.

Finally my eyelids fluttered opened. The tinkering in my abdomen was quiet and I lay in my own bed, my body undisturbed from its posture of initial repose, my voice unstrained by shouting. The sounds of dawn seeped through into the sanctum of our bedchamber. 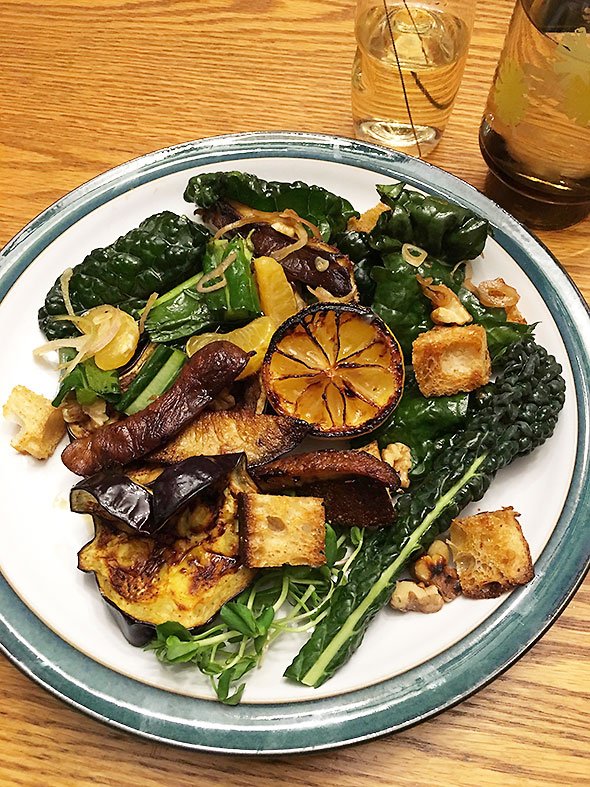 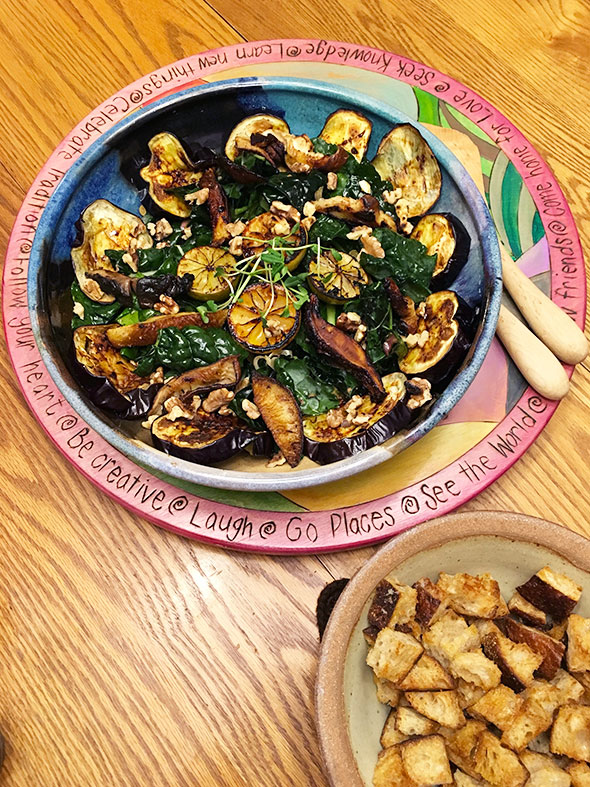 A couple of weeks ago, I learned that I’m pre-diabetic. I’ve been expecting this news as I’ve been creeping closer to menapause, but still it’s a bad blow. I have regrets, sure, but I’m glad for my recent decision to eat more plants, to consume less meat, sugar, and dairy. By learning to cook a variety of vegan dishes, I’m hoping to get to a better place where I can maintain a high quality of life and in it certain traditions…making the Christmas cinnamon rolls and decorating the children’s birthday cakes. However, I do fear being overtaken by a menace that for so long went unrecognized. 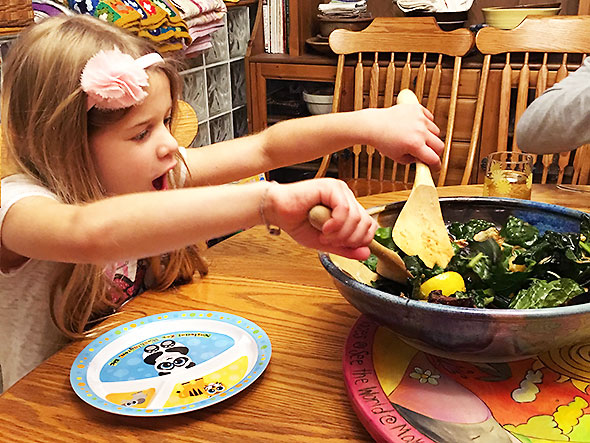 The good news is that life is joyful without indulgence, eventful without extravagance. I accept that my body is reprograming itself for the next stage of life. I mean to stay awake and align myself in a sanctuary of real hope and appropriate action.