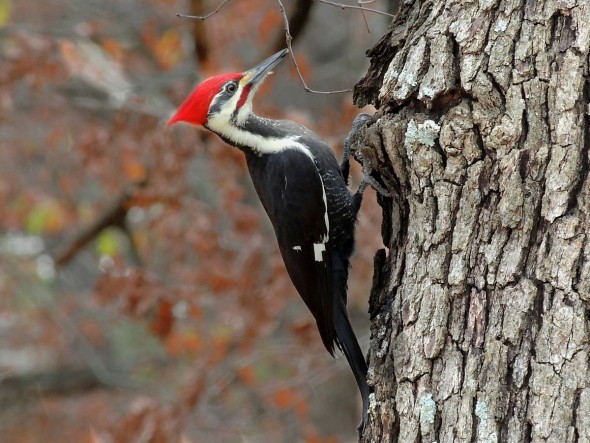 Rat-tat-tat! Pileated woodpecker at work. Fourteen of these were spotted during the recent Christmas Bird Count in Glen Helen and environs. (Image from Wikipedia)

The numbers are in from the annual Christmas Bird Count in Glen Helen and environs, held 8 a.m. to 2 p.m. on Jan. 3! (Those daylight hours mean few owls, whooo are nocturnal, ended up in the count.) While perhaps not quite counting every bird, the count provides a yearly snapshot of those birds who migrate through our region in the early winter, overwinter here or join us in calling Greene County their year-round home. Over time, that snapshot reveals fluctuations in local and regional bird populations, and provides valuable data about long-term trends, including climate change.

Our local count area is a circle with a 15-mile diameter spanning just north of Yellow Springs to Xenia. It includes Glen Helen, John Bryan State Park, Clifton Gorge State Nature Preserve, a number of county parks, Beavercreek wetlands and all points in between. The count is organized by Nick Boutis, executive director of Glen Helen, who is also an enthusiastic participant.

You can read a “bird’s-eyewitness” account of this year’s event, published in the News on Jan. 7. And you can learn more about the history and significance of the Christmas Bird Count, a 116-year-old Audubon Society tradition that involves tens of thousands of “citizen scientists” from across the Americas.

And finally, without further fuss or flap-flap-flapping of wings, here are the tallies (keep reading to get to the totals):

Stay alert for next year’s count, held between mid-December and early January.