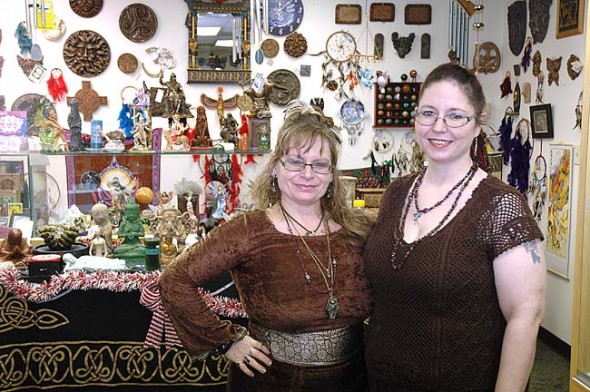 House of Ravenwood’s Marta Mari (left) and Lorelai Wessendorf stand in the store’s recently expanded square footage. The store has added a number of new displays and cases for their eclectic metaphysical wares. (Photo by Dylan Taylor-Lehman)

Store finds success in runes — Catering to the metaphysical

Chalk it up to the numinous power radiating from the area or the loyalty of the store’s fanbase, but the House of Ravenwood is on a roll. Yellow Springs’ premier “metaphysical rock shop” recently expanded its square footage, increasing the store’s size by about a third in mid-November. Twelve years of successful business have allowed owner and founder Leah Gompf to live out her dream of owning such a shop and helping area shoppers with all of their metaphysical needs.

Thanks to the expansion, there is now room for more of the store’s diverse merchandise. At least three new large glass display cases were installed, holding extensive collections of rock and crystal specimens and jewelry. One is dedicated entirely to fairy statuettes. The store has also added an additional room for tarot reading.

Gompf said a visit to the store is an excursion. Visitors appreciate the opportunity to have their minds opened to new ideas, and kids appreciate the opportunity to peruse the treasure trove of rocks and crystals. The excitement of discovery has helped House of Ravenwood flourish. The store has grown every year, she said, and 2015 was the best holiday season on record.

“We really appreciate our Yellow Springs regulars,” she said.

The expansion was completed with remarkable dispatch, thanks to co-owner and husband Dan Gompf’s experience as a builder. He was able to knock down walls, lay carpet, and reconfigure everything in under two weeks. The store got the go-ahead to expand in mid-November, and the new space was ready for use by Thanksgiving. In fact, the expansion happened so quickly that Gompf is still trying to figure out the possibilities the new space allows. She said she would like to bring in reflexologists and massage therapists, offer more classes and start weekly rune readings.

Tarot and rune readings are part of House of Ravenwood’s mission, Gompf said, as the store is designed to offer something to people of many spiritual inclinations. For example, the rocks the store sells put people in contact with what she called “the gift of the stones,” a healing energy that vibrates to a person like a tuning fork. (The gift of the stones is an ancient practice, she said, citing news reports of an ancient man found frozen in the ice who had a bag of similar stones with him.)

Gompf herself has been giving tarot readings since 1961, when her mom taught her how to read regular playing cards as a child. Although she acknowledges the skepticism with which many people view tarot, she said that very few people who go into a reading with an open mind come out unchanged.

In fact, the wisdom of tarot helped lead to the creation of the store. People often look to tarot for specific answers about the direction of their life, said Gompf, but what tarot reading actually does, she said, is reveal the three paths a person has before them.

One path is a rut, a course that can comfort or hinder in its stasis, and the other two are the opposing branches of a choice. It is up to the person to recognize how these paths relate to the questions they are asking of life. Should they stay the path they are on? Should they go for one of the choices and explore where it leads?

Thirteen years ago, Gompf was in a rut. She was working an unfulfilling job and needed a change. She had always dreamed of owning a little rock shop where she could do tarot readings, she said, and the spirit she consulted responded with one simple word: “Try.”

And try she did. Gompf called the Chamber of Commerce to explore her options for a small business space. She was directed to a small metaphysical shop in town, which, as it happened, the owner was interested in selling in its entirety. The spirit that told her to move to Yellow Springs also told her to wait there for her beloved, which she did. Dan, her boyfriend at the time and now husband, helped her purchase the shop.

Gompf said she considers herself an “eclectic,” a spiritual person who derives guidance and support from all spiritual teachings. After all, she said, the world’s religions channel the same spirit — names and distinctions only build walls between people, and cloud spiritual connections. But the store is not there to change anyone’s mind or tell people what to believe, she said. House of Ravenwood is there to assist people on their own spiritual quest.

In Gompf’s case, the quest has come full circle. She was once looking for answers and can now rely on her experience and the supplies proferred by the House of Ravenwood to help people find theirs. In turn, the store’s customers have helped it grow. Literally, in the case of the store’s recent expansion, like mystical crystals nucleating in the timeless depths of the Earth.

“The success has blown us out of the water,” Gompf said. “We are so amazed, so totally blown away with the amount of business that we have and the support of the community. It’s beyond anything we’ve ever hoped for.”