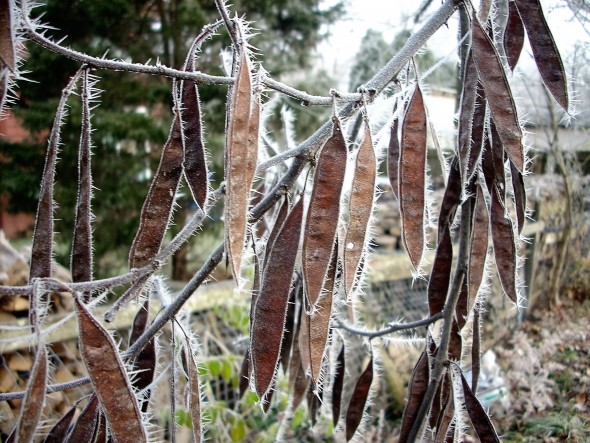 I spent time in a winter garden last week, and it reminded me of two other winter gardens from long ago, from when I was a child and more than a child.

One garden was owned by family friends. I must have visited it half a dozen times, in different seasons, but I only remember one time, in winter, when the brick paths gleamed with ice and the boxwoods’ 10,000 tiny spoon-like leaves each held a fairy-mouthful of snow. It was an architectural garden, not quite a maze but enough like one to thrill and slightly scare a child who was susceptible to both sensations. I remember noticing how twigs and stones were caught in the ice, and how lonely they looked, like butterflies pinned to a board and covered over in thick glass. And how lonely my shoes looked, black patent leather, shiny like the ice and reflecting in their toes the cloud-pebbled sky.

I was on the cusp of changing — the first hints of puberty, shivery-sounding word, about to come — and the remoteness of my own two shoes seems in retrospect harbinger of that change. Have you watched a child discover her own feet — I mean, discover those two funny knobs as her own? Something opposite happens in adolescence, I think. Everything you thought was yours, wasyou, becomes remote and ungovernable, satellites to your life, or maybe space junk, slipped from any orbit.

The boxwoods had a musky-funky, more-than-floral smell — I can’t describe it, except to say that there was a wildness in it that their clipped and careful shapes belied. The look of things could lie, I was learning. Wildness could live in a girl in a cream-colored blouse with a black ribbon at the neck to which was pinned a pink sateen rose, an outfit I had loved but now felt to be more costume than clothes.

The other garden came much later. I was in college, home on winter break, and my boyfriend and I found it the way every garden should be found: by noticing hedge-tips and grass-plumes above a wall, by following that wall, by finding its gate and simply stepping in. It was a public garden (I was too meek to truly trespass) that had been abandoned to winter; we were the only ones there, and the bit of snow on the ground held no footprints but our own. It was terraced — down and down it went, and down and down we went, to a gully at the bottom, and then up and up again. Maybe it was the rapid loss and gain of elevation, or just the solitude of the place, or just the time of life we both were in — but we felt we’d stepped out of our lives into a space of no-lives, or any-lives, a space in which every life could happen, or already had. Were we there to reminisce or look ahead? Time slid like snow from a gazebo roof, the roof we were standing under, and we watched it slide.

We stood our two bodies in the gazebo like the bride and groom we were sure in that moment we would someday become (we never did) and we each thought our own thoughts, imagining they were the same thoughts (and maybe they were — who can tell?). Hand in hand, we left the garden … is there any image more laden? The curse that fell upon us then was the curse that falls on every life: you only have one.

Only one chance to take home a pod from the garden, which I did, and hear it pop, which it did, and save for months the seed that pop ejected from the halves that had been a whole. Which I did. The seed was a symbol, and the split pod was a symbol (its gash either grimace or grin), and I knew instinctively that it’s better to hold onto the seed than the busted husk it leaves behind.

A winter garden is remnant and portent. Everything lies shattered; everything’s about to burst. Despite the heavy silence, the dormancy, the glide and gild of shadows, there’s life in it. A winter garden holds as much spring as spring itself, the way the pause before speech holds as much speech as the flow of words that follows. Were I to go back to those old gardens now, which ghosts would I encounter? Which me (ghost from the future) would they encounter, and in which one life do we all cohere?