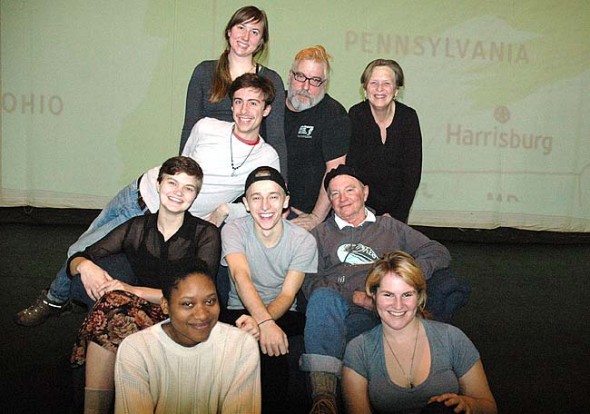 A workshop on theater improvisation and civic engagement will take place this Saturday, Feb. 13, at the Antioch College Foundry Theater from 1 to 4 p.m., led by members of The Talking Band theater company of New York City. The event is part of a monthlong project that includes the March presentation of the play “Marcellus Shale,” about the effects of fracking on a community. Shown here are cast members, from left to right, front row: Ida Lease Cummings, Parker Phelan; center row: Selena Wilkinson, Cole Gentry, John Fleming; Third row: Sean Allen; Back row: Hannah Priscilla Craig, Michael Casselli, Louise Smith. (Photo by Diane Chiddister)

Yellow Springers have an opportunity to learn about how theater improvisation can enhance civic engagement in a free workshop this Saturday at Antioch College. The workshop, which is open to the public and funded by National Endowment of the Arts, will be led by Paul Zimet and Ellen Maddow, founders and members of The Talking Band, a cornerstone of the New York City avant garde theater, which was recently praised by Ben Brantley of the New York Times as “one of the boldest and most venerable politically minded companies in New York experimental theater.”

The workshop, titled “Devised Theater and Civic Engagement,” takes place at the Foundry Theater on Saturday, Feb. 13, from 1 to 4 p.m.

In an email this week, Zimet wrote that he hopes the workshop attracts “artists — theater, music, dance, writers, visual artists who have an interest in community based art, or collaborative creative process, or both. We will be sharing exercises that Talking Band uses in the creation of its own works — in movement, music, writing and the creation of characters and theatrical images.”

Those interested in attending the workshop are invited to simply show up to the event on Saturday afternoon, according to Antioch College Associate Professor of Performance Louise Smith.

The New York City artists will be on the Antioch College campus in residence for five days this week, as part of a project that also includes the production of their play, “Marcellus Shale,” which will take place Friday and Saturday, March 11 and 12, at 7:30 p.m., also at the Foundry Theater.  The play focuses on how fracking affects a community, and the project includes a panel discussion on fracking on Saturday, March 12, from 3 to 5 p.m.

Smith aims with this project to engage the Yellow Springs community in a discussion of the issue of fracking, which affects many Ohio communities, especially in the northeastern part of the state. She believes that theater, and especially this production, can help those on all sides of the issue listen to each other.

“This is meant to invite the audience into an aesthetic space where we can talk about the things that are important to each other,” she said in a recent interview. “We hope the project invites compassion from the audience, that the laughter, beauty and catharsis of the theater allows us to let down our guards.”

Zimet and Maddow wrote the play and its accompanying music (although it’s not a musical) after their own upstate New York community became involved in the fracking controversy. While the state currently has a ban on fracking, most of Zimet’s neighbors have signed contracts with oil and gas companies to use their land if the ban lifts, he said in a statement regarding the process of writing the play. And while he opposes fracking and has not signed such a contract for his own land, he interviewed his neighbors for the play. But he didn’t ask them about fracking; rather, he asked them about “What really matters to you? What would be the last thing you give up? What do you consider the good life?”

What Zimet hopes audience members leave with is a sense of “the humanity of the characters — an appreciation of the multi-dimensionality, the complexity of their lives, and the high stakes for everyone,” he wrote in the statement. “When audiences leave the show, I would be glad if they were moved to take action to avert the disaster that has fallen on the land and the people of the play, but I would be disappointed if they came away believing one side is good and one is evil. My wish is that the audiences will recognize how good and bad is entwined in the characters of this play, as it is in all of us.”

Collectively, the company and founders of The Talking Band have won 15 Obies (off-Broadway theater awards) and numerous other honors for their productions, according to a press release. The Talking Band has “created over 40 new works illuminating the extraordinary dimensions of ordinary life,” the press statement says, “each marked by a commitment to radical collaboration and a fusion of diverse theatrical styles and perspectives.”