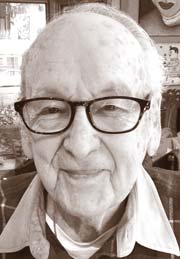 David Lawrence Fleming passed away on March 23 after a long and eventful life. He lived in Yellow Springs as a result of Hurricane Katrina and, over the last 11 years, became a familiar community member known for his charm and Southern manners. For much of his time here, he worked as a volunteer at the YS Senior Center and the Friends Care Community. He also worked for a few years volunteering at Tecumseh Land Trust.

David was born in New Orleans on Jan. 18, 1923, one of nine children. Throughout his life he embraced his heritage by living up to the belief that an individual should never be dull. From an early age, he showed a talent for the stage that led him to New York City in the 1950s, where he pursued a career as a dancer in musical theater, cabaret and revues. Highlights of his career included a stay at the Crazy Horse Saloon in Paris and a tour starring Christine Jorgensen. He returned to New Orleans in 1962 to care for his mother, whom he adored. He continued to participate in productions at La Petit Theatre du Vieux Carre and the Tulane Lyric Theatre while working for Lighthouse for the Blind and Walmart. In retirement he volunteered at Mercy Medical Center. He loved bingo, socializing with friends, playing cards and drinking a good Bloody Mary.

David is survived by sister Laurenel (Toby) Basset and numerous nieces and nephews in Louisiana and the country. In 2005, he was forced to abandon New Orleans after the storm and was welcomed by nephew John Fleming (Louise Smith, Emile Fleming, Belle-Pilar Fleming). David quickly became active in the Yellow Springs community and was frequently referred to by all alike as “Uncle David.” His passing is mourned by dear friends Andrée Bognar, Barbara Brookshire, Judith Parsons, Nancy Hirsch, Lucia DeRidder and Martie Jensen.

In 2013, he recorded his personal story for NPR’s Story Corps; CD copies may be obtained by contacting his nephew. David had a life of many chapters and episodes, which he loved to share, often featuring multiple versions of the same events. His personal stories often had brushes with fame, including weekly beer parties in New York with fellow dancers, whose stories became the basis of the musical “A Chorus Line,” driving across the country with the entertainer Tiny Tim and a singular night in a famous New Orleans watering hole with the then-unknown Ellen DeGeneres.

The public is invited to share stories about David Fleming at the Yellow Springs Senior Center on April 24 from 2–4 p.m. Refreshments will be served and, in his honor, a second line will take place. In lieu of flowers, please donate to the local organizations where he volunteered.

One Response to “David Lawrence Fleming”