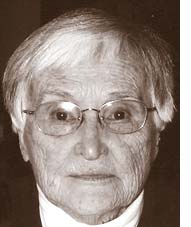 Gertrude Helen “Trudy” Chasens passed away at the age of 98 on Feb. 25, 2016, in Verona, Pa. Ms. Chasens was born in Germany to Karl and Anna Sternberger. Because of the difficult economic time after WW1 in Germany, her father, uncles and aunt immigrated to the United States; in 1927 her father had saved enough money to bring Trudy and her mother to America. They came through Ellis Island as did others with similar experiences.

During the Depression, in 1939, Trudy graduated from Stivers High School in Dayton. She considered herself fortunate to get a $12 a week job. At that time streetcar fare was only 5 cents, and a bag of plums was 25 cents.

Trudy earned both bachelor’s and master’s degrees in education from the University of Dayton. Trudy would have told you that there were few occupations open to women at that time: women were either secretaries, nurses or teachers, and that women have many more choices today. Because she wasn’t able to take shorthand and hated the sight of blood, she became a teacher. She taught elementary school in the Dayton public school systems for several decades. Fourth graders were her favorite; at that age, the children were already able to read and she could work to help them learn to think critically.

During those years, she was active in a campaign for Mary Morgan for Dayton City Commission, the Citizens Clean Air Association and Survival Inc. Her environmental concerns included pioneering work for mass transportation and evaluation of the environmental impact of I-675. Forty years ago, she was a pioneer in questioning gender inequity in the administration of the Dayton Board of Education.

After the death of her first husband, Samuel Chasens, Trudy moved to Yellow Springs, where she treasured her home for over 35 years. Her retirement years were extremely active as she pursued international travel, gardening, bridge and social activism. She was active in the peace movement, equal rights for women, environmental and civil rights issues. As a member of the Yellow Springs Citizens Against Domestic Violence, she was involved in strengthening the enforcement of domestic violence laws. Ms. Chasens would tell you that her biggest accomplishment, and the one she felt most satisfied with, was in assisting with the establishment of the Women’s Studies program at Wright State University. The program partially received its initial endowment due to her letter writing campaign to the Ohio state legislature.

Trudy married Oscar “Pete” Peters, a friend from high school, in 1999. He had seen her letters to the editor in the Dayton Daily News for years and stopped by her house for a chat. Her warm hug before he drove away on that day was just what he needed; he was devoted to her from that moment on. Her years from then until his death in January 2013 were the happiest in her life. Pete’s death led to her becoming an advocate in reducing hospital errors in the care of the elderly; she wrote to the Center for Medicare and Medicaid Services, U. S. Department of Health and Human Services and the Ohio Department of Health, provider and consumer Services Unit. In August 2013, with a letter to the editor of the Dayton Daily News, she tried to publicize the issue of improved hospital care to help older adults return home without complications. With her move to Pittsburgh, Trudy continued her life-long habit of writing to the newspaper on issues that aroused her passions. Her last letter of advocacy was to the Pittsburgh Post Gazette in March 2014. This letter concerned how the media largely overlooked Women’s History Month.