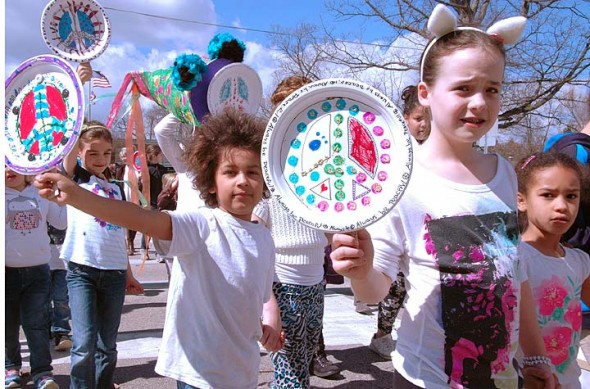 Three years ago, Mills Lawn Principal Matt Housh and School Counselor John Gudgel were discussing bullying in schools and the methods by which bullying is typically addressed, methods that Housh says are “not very effective.” Rather than push the notion that conflict ends when bullies are singled out, Housh says the two of them decided to, begin a school-wide dialogue about “creating peace, what peace looks like, how we engineer peace every day.”

Thus Project Peace was born, and since its inception in 2013, each year’s project has looked a little different. This year, the school held a Peace Parade through downtown Yellow Springs, bearing handmade peace signs, painted fish and large bird puppets, with some students walking on wooden stilts. As they marched, students chanted “Peace is better than violence!” and “Peace! Peace! Save our Earth!”

The procession ended in Mills Lawn’s gym, where students assembled for a “peace pep rally.” During the assembly, students Tiger Collins and Maggie Knopp were recognized for their outstanding essays on peace, which they read for the crowd.

Village Manager Patti Bates and three YS Police Department officers attended the rally to present a resolution from Village Council, which read: “Whereas, Mills Lawn Elementary School proclaims that Peace Week shall be devoted to strengthening the ideals of peace both within the school and among all members of our school community …  Council for the Village of Yellow Springs hereby proclaims the week of March 14–18, 2016 Peace Week at Mills Lawn Elementary School.”

The assembly ended with all the students singing a version of Appalachian folk singer Jean Ritchie’s “peace round,” “What a Goodly Thing.”

In an interview with the News last year, Gudgel said he thought that the efforts so far on behalf of peacemaking were paying off in the schools. Students, he said, “now have the skillset of how to resolve conflict. There certainly has been a change — it seems there are less conflicts.”

This year, Gudgel says that the positive effects of Project Peace are reaching beyond the walls of the schools: he received an email from a parent saying that their child was using the conflict resolution skills they had learned in school at home.

“The parent was like, ‘Whoa, my child is actually internalizing and dialoguing with me as an adult about a conflict?’ … This applies 24/7, not just here at school. It’s part of life; it’s a life skill.”

Gudgel says this is exactly the kind of result he and Housh hoped for when they initiated Project Peace. “Kids are beginning to use their conflict resolution skills without assistance from adults,” he says. “It’s really inspirational when kids can act out and apply those skills.”

Scroll down to watch a brief video of the Peace Parade and listen to Mills Lawn students singing “What a Goodly Thing.” Scroll further to see a photo gallery of the day’s events.