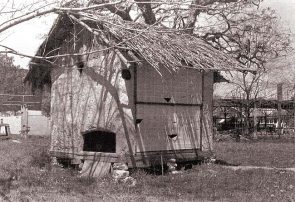 An authentic Japanese tea house, built by Japanese Professor Harold Wright and his students in the 1970s, once graced the Antioch campus. Photos of the tea house and grounds will be on display May 2–8 at the Foundry Theatre and Wright will give a talk about the project on May 4 as part of Ohayo Ohio, a Japanese symposium and cultural event. (Submitted photo by Harold Wright)

Curiosity, hands-on exploration and a deeper appreciation for Japanese culture. All these attributes will be encouraged, and rewarded, at the upcoming Ohayo Ohio Japanese symposium and cultural event, a 10-day blossoming of workshops, talks and cultural experiences organized by Antioch College and the Yellow Springs Arts Council. Drawing on a wealth of local talent and a special presentation by two visitors from Kyoto, Japan — a renowned silk-dyeing artist and an environmentalist — Ohayo Ohio promises to be “an interweaving of loveliness,” said organizer Beth Bridgeman, Antioch instructor of cooperative education. The symposium opens on April 30 and runs through May 9.

According to Bridgeman, Ohayo Ohio got its start as an idea for a workshop jointly led by Mami Adachi, a silk-dyeing artist and weaver who uses natural dyes to create kimono fabric, and her sister, Riko Mukai, a former Antioch exchange student and naturalist intern at the Glen who now works as an environmentalist in Japan. Bridgeman was visiting Kyoto Seika University, a former Antioch exchange partner, last spring when she and others “hatched the idea” of a Yellow Springs workshop to revive historical ties between Kyoto Seika and Antioch. Upon returning home to the village, Bridgeman shared the notion with local Japanophiles and the Yellow Springs Arts Council.

“There are all these Japanese connections in town,” she said recently. “And so the workshop quickly became a symposium.” Organizers include Bridgeman, Jackie Mulhall and YSAC staff Nancy Mellon, Holly Underwood and Lara Bauer.

The line-up features a mix of free and low-cost events, including some workshops geared specifically to children. Workshops — in areas as diverse as natural silk-dyeing, fish printing, sushi making, calligraphy, children’s ikebana (flower-arranging), Japanese embroidery and more — will involve participants directly in an art form, while other events will immerse villagers in Japanese traditions such as tea ceremony, storytelling and poetry.

One of the opening events, on Saturday, April 30, is a papermaking workshop led by Timothy Barrett and Sarah Strong. Barrett is an Antioch alumnus who is internationally known for papermaking; long associated with the University of Iowa and its Center for the Book, he received a MacArthur “Genius Grant” in 2009 for his work with handmade paper and book arts. Strong is a local artist, teacher, papermaker and printmaker.

Barrett and Strong will teach workshop participants how to create paper the Japanese way, from pulp made from the inner bark of the mulberry tree and pressed into thin sheets. Participants will make two sheets of paper, one using a traditional Japanese tool and another a simpler, more widely accessible tool, explained Barrett.

“By the time [participants] are finished, they’ll have a grip on the process,” he promised in a recent interview.

Barrett believes that papermaking and book arts will become more, not less, sought-after in the digital age as “physical things gain more presence and weight” precisely as they begin to disappear. “I believe it’s an excellent time to be studying this stuff,” he said.

Barrett will also give a free talk on his journey from Antioch to a career in paper arts, a field he might never have pursued without the college’s emphasis on “doing and exploring things you were interested in with complete and utter disregard for whether you could make a living doing it,” he said with a laugh. “Though I have,” he added.

In addition to co-leading the workshop, Strong will be opening an exhibition called “The Power of Story.” It’s an exploration of the “governing stories” — everything from ancestor stories to bedtime stories — that influence our lives for good or ill, she said. Viewers will have a chance to share their own governing stories and respond to “story starters” that Strong will provide.

Stories, reminiscences and oral recitation will be a part of three free events hosted by Harold Wright, a longtime village resident and renowned Japanese poetry scholar who began Antioch’s Japanese language program in the 1970s. (Japanese is one of three languages offered today at the revived college.)

On May 3, Wright and his wife, Jonatha, both noted storytellers, will be enchanting audiences with Japanese stories told using authentic gestures, inflections and other nuances.

Then on May 4, Wright will be presenting a talk on the Japanese tea house he and students constructed on campus (near the outdoor amphitheater) beginning in 1975, in conjunction with a photo exhibit on the project. The highly authentic mud, stick and thatch structure embodied the Japanese principles of “simplicity, irregularity and perishability,” he said, and was a learn-as-you-go exercise for him as much as for his students. (The first iteration of the thatch roof used a Midwestern material, corn stalks, which proved highly perishable.) Pools with circulating water and Zen gardens completed the tea house project, though the structure itself burned down in the 1980s. Other versions of an open-air structure have since been built on the same spot, most recently by art professor Sara Black.

The original tea house was “the kind of weird thing we do here,” Wright recollected with a laugh.

And on May 7, Wright will offer listeners a one-hour aural tour of 1,300 years of Japanese poetry through a presentation of “some of my favorite translations strung together” in a chronological flow.

Another longtime villager, Tokyo-born installation artist Migiwa Orimo, will explore the Japanese concept of ma in her two May 1 workshops, calligraphy and “drawing in space,” a sculpture-making workshop using paper and bamboo. Ma means space, said Orimo recently, but more specifically, “the space between things.” The concept is key to understanding Japanese art and, indeed, the culture as a whole, she said.

“Ma is for me the essential ‘operational system’ of Japanese culture,” she said. “It’s both invisible and constantly there.” She works with the concept in her own art, which emphasizes disparate elements, disjunction and the relationships between objects. But workshop participants won’t just be learning about ma in the abstract, she said; they’ll be creating pieces to take home.

That kind of cultural learning is exactly what Bridgeman said she hopes Ohayo Ohio will inspire. Peace among nations is built on cultural understanding, she believes, which is achieved “one person at a time.” A village that has many historical and cultural ties to Japan (Antioch archivist Scott Sanders will highlight some of these on April 30) can play a small but meaningful role in that broader project of peace building.

“This is ultimately a celebration of all the ways we can come together,” Bridgeman said.

For a full schedule, including presenter biographies, visit http://www.yellow-springs-experience.org/ohayo. Workshops require pre-registration and pre-payment; participation is limited and spaces are filling fast. Many free events are also available.