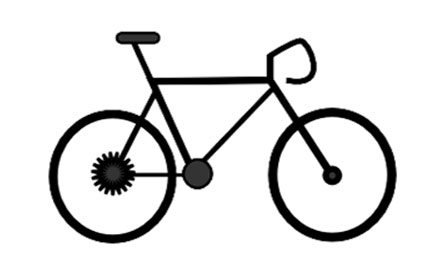 Biking - about as stripped down as you can make it!

BLOG – I decided I would try the World Naked Bike Ride

Recently, I wrote an ode to my bike after a particularly fun bike ride. This past week, my bike and I got closer still, when I rode it naked through the streets of downtown Columbus.

Last Saturday, Columbus hosted was the World Naked Bike Ride. WNBR is an event held in 70 cities across the world in which cyclers ride en masse through an urban area, clad in as little clothing as they’d like. The idea is to raise awareness about the visibility of bikers and to protest the country’s dependence on oil, and to affirm the beauty of bodies of all shapes and sizes. In Columbus, riders congregated on one end of town, disrobe, ride ten miles to another part of town, and then danced the night away at the afterparty.

A friend of mine helped organize the event, and a bunch of my friends were participating. They extended the invitation. It seemed like something I should check out – how often do you get to ride around naked with hundreds of other people? (Admittedly, the unique opportunity to see a lot of your friends in the nude seemed pretty funny too.) I decided to do it.

I arrived in Columbus and rode to the meeting place. Immediately upon turning the corner, I was greeted by a sea of ruddy bodies and bikes. I thought there would some element of secrecy right before the naked ride, but no, people were in party mode and ready to go. Some people had capes, some had funny helmets, many were streaked with bodypaint. I found my friends, laughed about getting to know each other a little better, and joined the unattired masses.

A certain giddiness accompanies being in the buff, especially in a place where such practices aren’t usually permitted. It was interesting how quickly any worries went away. There is definitely strength in numbers – attention isn’t directed to you because there are so many other people doing the same thing, and your own self-consciousness is lessened because there is simply so much going on around you. It was such an absurd situation – the feeling of participating in such a good-natured spectacle was invigorating, as was the breeze my body was quite free to enjoy. People began spontaneously whooping or laughing once the column starting moving.

I realized the ride was going past a bar where my friend’s band was playing a show. Everyone was outside watching the nude bikers go by, and I easily picked my friend out of the crowd. I shouted his name as I got closer but he didn’t hear me. I pulled off to the side and yelled and waved my arms until one of his bandmates said, hey, some naked guy is yelling for you. We had a good laugh as he walked over, as he didn’t know I’d be in town or expect me to be dropping by in such a fashion. He initially averted his eyes, but we’ve been friends for almost twenty years – what’s a little nudity between longtime friends?

The ride wound through campus, where students lined the streets, and down to the Short North, where people out on the town lined the streets. The mass of bikers had to have stretched at least half a mile. Most people were laughing, waving, shouting encouragement, and even taking off their own clothes as the column went by. I was pleasantly surprised by the lack of lewdness yelled by the crowd; as far as I could hear, nobody was harassed or scolded or made fun of, which was unexpected. Clothed bikers disrobed and joined in as well.

Police formed an escort alongside the parade and redirected traffic. I imagine the cops were thinking about stopping the ride, but the prospect of arresting so many hard to wrangle people on bikes was too daunting so they just sighed and helped get it over with as quickly and safely as possible.

The ride wasn’t too fast or slow, aside from a few traffic jams when the column had to make a turn or squeeze by row of parked cars. The route and speed were designed not to be too strenuous in order to accommodate everyone. All in all, I think an estimated 1,000 or so people were there. I spent a lot of the ride next to various friends, chatting as we cruised along. I also chatted with strangers about the funny things that happened as we rode through the city. Nobody seemed bashful at all, which was cool. It’s not often that so many people feel powerful while in a situation traditionally associated with vulnerability. “Clothing is a construct!” somebody yelled.

The ride back made for a slightly different story, as we didn’t go back as a cohesive pack. I started riding back with 50 people, which eventually turned into five. Riding naked through Columbus in full traffic with only a few other people was akin to that dream where you realize you went to class naked. But the first part of the ride was empowering enough that you just shrug off the discomfort, and enjoy the fact that you got the chance to do this unusual thing. No big deal.

Everyone made it to the afterparty. The puzzling scene of hundreds of naked people showing up in your backyard repeated itself as we took over an alley and waited for the doors to open. (The meeting place was basically a handful of connected backyards.) Presently the revelers took over a barcade and rendering it clothing optional. More ridiculous sights and sounds ensued, and went on for hours.

Of course, elsewhere that night, horror of the worst kind was unfolding in a club similarly filled with revelers. Thinking about the fun everyone was having inside, it made no sense to me that anyone could object to such genuinely joyful feelings or the desire to express it. How can someone deny another the right to have these feelings, or presume they have some kind of say in another’s autonomy as an individual human being? What an odd impulse, to encourage strife where there could be encouragement.

I appreciated the opportunity for a space where everyone could feel a little more like themselves, or at least be given full license to get in touch with a side that’s usually quashed or held in check. I appreciated the positivity of the event, where it really felt like judgment was suspended and numerous barriers were stripped away. Everyone deserves to feel comfortable in their own skin, and I believe that comfort can be truly fostered when everyone is pretty much literally only in their own skin.