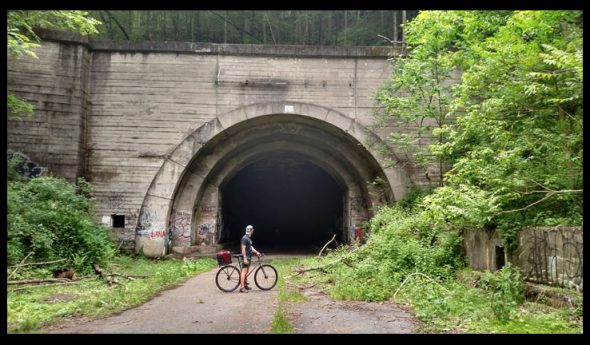 BLOG – Ode to my Bike

The other day, I fulfilled a long-held desire. I went to Breezewood, Pennsylvania, to bike on an abandoned, overgrown highway. A 13-mile stretch of the PA Turnpike was deserted when the road was rerouted, and now this stretch serves as a “use at your own risk” bike path. Not only are highway accouterments still in tact, but so are two enormous tunnels through the mountains. Being able to bike this trail, an eerie ex-road surrounded by lush vegetation and fog rolling down from the hills, was exactly why I like biking so much: you can explore without limits, indulge your imagination, and physically connect with the world around you, all at your own pace. 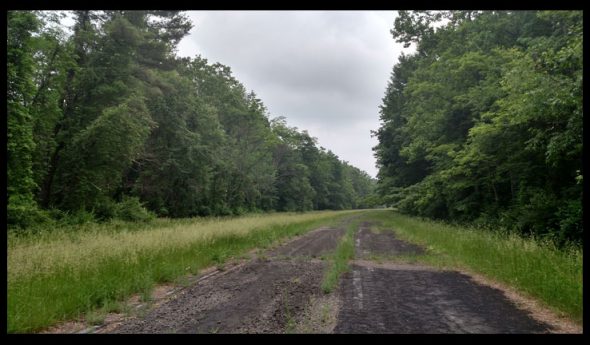 I got my first bike when I was five. It was a tiny green bike that I learned to ride around the neighborhood. I enjoyed pedaling around the little square and watching bricks zoom by me as I sped past walls and houses. Although I learned a tough life lesson when I crashed trying to go up a curb that was too high, I was smitten enough with the feeling of able to pilot my own vehicle wherever I wanted that the occasional scraped palm wasn’t enough to deter me from pursuing it whenever I could.

When I was in elementary school, that same feeling accompanied my rides around the neighborhood, and it was augmented by the ability to jam backwards on the pedal and skid-stop abruptly. I fondly remember my friends and I trying to see who could make the biggest rubber mark and the loudest screech as our bike whipped around 180 degrees in an impressive stop, ideally kicking up a satisfying cloud of dust in the process.

In college, my friends and I would go out and ride en masse. Exploring Columbus in the middle of the night, spread out in a pack across empty city streets, was as close to invincible as I’ve probably ever felt. We rode up and down parking garages and to the convention center, whose doors are unlocked 24/7 because it’s connected to a hotel. We found a huge escalator with what amounted to a fifty-foot metal slide between its up and down directions. Needless to say we all tried it out and were launched quite a ways onto the carpet below. Later that night, on the OSU campus, we escorted a couple down a path across the Oval but made sure not to cross in front of them, as legend has it that if two people walk from the easternmost arm of the sidewalk to the statue in front of the library, then they are unofficially married.

A few years later, after my bike went to go cruise on that eternal asphalt in the sky, I invested in a nice, brand new bike. (RIP the “Adventure Patriot,” so-named for an American flag decal on the label and because it had been ridden through much snow). I didn’t want any gears or flashy accessories; just a reliable member in the happy love triangle that was me, my bike, and the road. I plunked down some cash on a sturdy road bike, and it is easily one of the best things I’ve ever purchased.

The reliability of that bike vastly improved the quality of my life. I could ride anywhere, for any length of time, with no faulty mechanics, no wobbling that made me brace for something to suddenly come loose. It helped me get in better shape and relieved stress. I had a job where I got off work at midnight, and I looked forward to the city devoid of inhabitants. I lived around the corner from OSU, and since no students were there in the summer, the campus was mine. Lighted pathways looked like racetracks from some futuristic video game, and some of the newer buildings had a neo-noirish façade that added to this otherworldly sensation. I’ve never been good at team sports because I just can’t get out of my own head and into the game; biking allows me to indulge my imagination completely while competing only with myself. 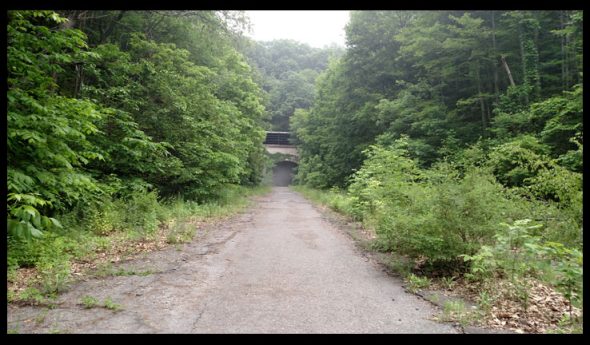 So last weekend, I rented a car to accommodate the bike rack I was using and was eager to head to PA. Post-apocalyptic movies were filmed at this sight, and I really wanted to experience a world devoid of humans. The clerk at the rental office said she’d heard of how intense the abandoned highway was, and then told me me of all the places she’s been that have resulted in her being haunted in some way, including an instance where her dad woke up and found he was covered in bruises that looked like the outline of a small hand. After a credit check, a call to my insurance provider, a form asking for references and the name of my landlord, I was graciously permitted to rent a car and was off.

At first, the abandoned highway (technically not “abandoned” since some kind of parks service keeps an eye on it) wasn’t as highway-y as I’d imagined it would be, as the first stretch looked like an overgrown driveway. However, it was soon was everything I’d hoped: a place that makes the world seem like it was evacuated decades ago. Riders have to navigate crumbling patches of asphalt and fallen trees and ride next to rusting guardrails. Of course, graffiti abounds, including some well-placed scrawls about how only death and destruction lurks ahead.

Indeed. A few miles down the path are two tunnels, something that I’m surprised is still legal considering the obsession with liability. The mouth of the tunnel is belching mist, and you feel a drop in temperature and huge whoosh of air as you approach. The tunnels are PA turnpike tunnels through the mountains. They are so long and so dark that at one point light from either end totally disappears. You are in the middle of a dripping, completely unlighted and seemingly unending tunnel in which every voice is disembodied and echoes in the most ethereal manner. Passing other bikers and seeing only their lights is unnerving and impressive, and inspires involuntary laughter at how surreal it all is. 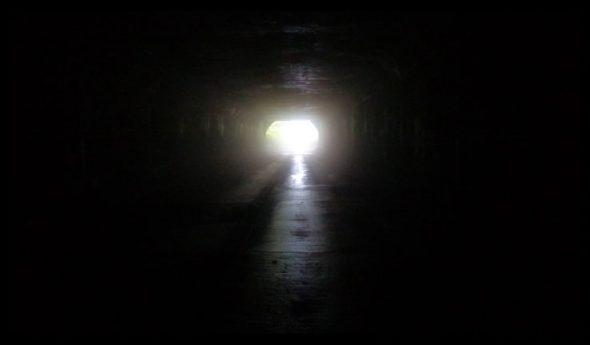 At either end of the tunnels are the decaying buildings atop them, which seem to be some sort of station house full of immense old turbines. (I don’t know how these tunnels work but I’m assuming this machinery is for pumping out noxious exhaust?) These buildings are covered in graffiti, some of it hilarious, most of it ribald, including one creative epithet scrawled in a place that had to have required the artiste to rappel down from the top. I had a good laugh at the notion that someone risked life and limb because they just had to write a crass swear.

The highway continues to another, even longer tunnel, and then dead ends. There is a secret mile or two accessible through the woods (a fence on the road says in huge letters that it’s private property) but it ultimately ends up in someone’s backyard. I ate in this even less-traveled stretch, marveling at the silence and intense tranquility of a world seemingly bereft of the people that changed so much of it. While sprawl and development is obnoxious in the present, seeing it corroded and crumbling automatically endows the ruins with a sense of solemnity.

And so it was with these sights and thoughts firmly in mind that I rode back the way I came, enjoying, as always, the sense of freedom being on a bike brings. I stopped and talked with some people before I went back into the long tunnel, and we were serenaded by a ghostly chorus echoing inside. A few moments later, coming suddenly out of the dark, were approximately 25 Mennonites on bikes, singing a hymn as they rode in a gang. We greeted each other, and their smiles and friendly conversation showed that the time they were spending on their bikes was just as exhilarating. I plunged back into the darkness of the tunnel, thrilled at where my legs were able to take me, and thrilled to add another 20 miles to the story of my awesome bike.