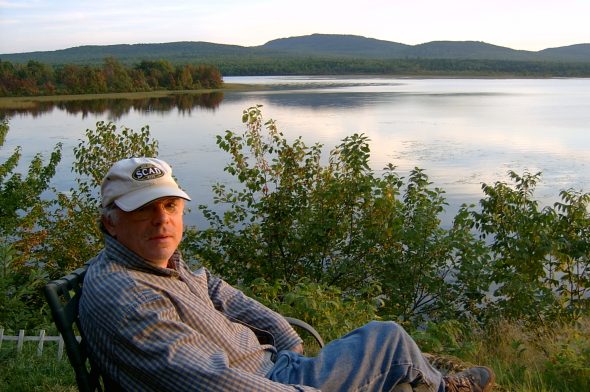 A backward glance from the shores of Long Pond in Jackman, Maine. (Photo by Audrey Hackett)

A lake is not an ocean, and for years I held that against lakes, believing (without basis) that a lake should be an ocean. An ocean lacking salt, and waves, and plenitude. A puddle, really, at the feet of Father Ocean. And then I actually went to a lake, and my prejudice dissolved in the usual way — with contact.

Long Pond was a lake, despite its name. (Why did the namer begrudge that particular body of water full membership in the ranks of lake? I have no idea.) Long Pond was nine miles long (the namer got that part right) and maybe half a mile across. It hung like a particularly wet piece of laundry on the line that was Moose River. The river fed the lake, and the lake, nine miles later, fed the river. Long Pond was a pause in the river’s flow — the river putting up its feet and taking a well-deserved break.

As were we when we visited Long Pond. It was the first trip I took with my husband, who was not yet my husband. We were looking for somewhere to go for a week in July. We were living in Massachusetts, and Long Pond was a lake in far northern Maine, eight hours away, enough of a distance to satisfy our desire to get away. As we drove north, the landscape changed. The deciduous trees thinned, the conifers took over. Such thick, dark forests! Fairy tale forests. And on the shoulders of the road, banks of wild lupine, tall purple spires.

We stayed in Ledge Cabin, set on a rocky outcropping over the lake. The lake. A grey eye. A third eye, the one devoted to contemplation. The calmness of a lake is one key to its character, I learned right away. For one week, we lived on that lake, in the blink (it never blinked) of that eye.

Within a day, our routine was set. My husband woke early, made coffee, and took it and his books and papers to the cabin’s screened-in porch. He looked, he wrote. Some time later, I awoke. I joined him. I looked, and looked. There was too much to see for me to do much else. Was it the first morning or another morning when the moose appeared? Either way, they appeared. At the far shore of the lake, a small herd stood in the water and dipped down their massive heads to feed. I almost would call them a pod, not a herd, like a pod of whales.

They seemed ungainly in their simple form: the knobby knees, the long and narrow faces, the strange antlers of the male, which looked to me like giant pelvises perched atop their heads. But watching them move in the lake made their grace clear. Water was their element. I gather they swim with ease. Certainly they stepped through the lake that way. Through the binoculars I could see their shining muzzles, streaming with water and weeds. Their fields were aquatic, their fodder the long grasses that grew not near but in the lake. They fluidly cropped a fluid meadow. And from the cabin’s porch I watched them. Morning and evening, they came to feed.

In a fanciful mood, I decided the moose were the lake, the spirit of the lake in carnal form. Placid, massive, materializing from the woods and melting back into it. Moose are marked by stillness, even when in motion. They are moving stillness, a paradox that somehow seems descriptive. A lake is this way, too. Tumult belongs to the ocean, and beneath it, the sense of ultimate calm. Serenity belongs to the lake, and beneath it, more serenity. But also a sense of impermanence. Like the moose returning to the woods, the lake, in its own time, will get reabsorbed.

At night, long after the moose had left, the loon called. Everything in this world has two spirits, and the loon is the lake’s second spirit, its mournful one. Nothing perturbs a moose (at least, nothing did in those placid feeding hours). The loon, by contrast, is exquisitely attuned to sorrow. It calls out the lake’s sadness, a ritual but not hollow keening. This lake, this life will end, it says.

As our week at the lake did. As all things but the ocean must. Driving home, I decided to shift half of my allegiance from oceans to lakes. Oh, oceans are eternal, and I love them for that. But lakes open up in time; we live with them in time. My love for the man who became my husband is not eternal; he will die, I will die. Instead, we have agreed to live in time together. The poet Jane Kenyon put it this way in her poem “Year Day”: “We are living together on the earth. / The clock’s heart / beats in its wooden chest.”

Lakes do have waves, the tiniest ones imaginable, and they do beat out a tiny song of time.