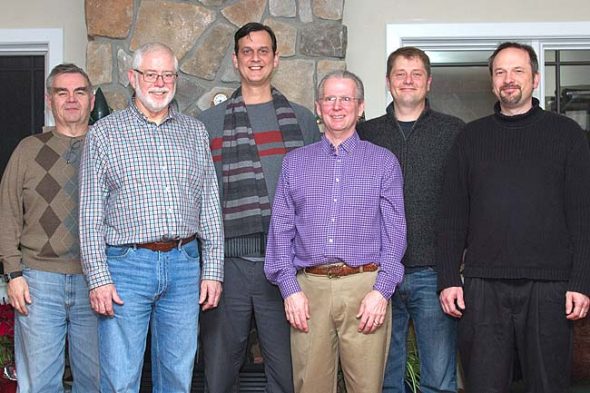 Next steps for fast, local Internet in village

A municipal fiber optic network is feasible in Yellow Springs, according to members of Springs-Net, a citizen group that has been studying the issue for the past 18 months. Springs-Net members presented their proposal for a high-speed municipal network to Village Council last Wednesday, June 8, at a special work session attended by a handful of citizens. Council members signaled their support for next steps, which include further information-gathering by Village staff and citizen education and outreach.

“There’s a lot of identification with having our ‘own thing’ here. I think if we get enough information out to people, they’re going to go with this. Because they’d certainly rather have Yellow Springs [Internet service] than Time Warner Cable or AT&T,” said Council member Marianne MacQueen toward the end of last week’s meeting.

Springs-Net, made up of 10 core members with networking and information technology expertise, is recommending the construction of a type of fiber optic network called a Gigabit Passive Optical Network, or GPON, in Yellow Springs. The network would provide much faster Internet service to village homes and businesses at costs comparable to or lower than existing Internet service options. The fiber optic network would be a publicly owned utility, much like the Village’s water and electric services.

Assuming Village Council members choose to move forward on the proposal, Springs-Net members estimate that the network could be up and running within a year of Council go-ahead.

Springs-Net envisions the Yellow Springs network as offering two levels of speed: 100 megabytes per second (Mbps) for most residential users, and 1 gigabyte per second for businesses and higher-demand residential users. Download and upload speeds would be equivalent. By contrast, Yellow Springs’ commercial providers currently offer speeds for all users ranging from 4–20 Mbps (AT&T) and 25–50 Mbps (Time Warner), and upload speeds are typically slower than download speeds.

According to the group’s latest figures, the project would cost an estimated $2.8 million, including approximately $2.6 million in construction costs and just under $200,000 in yearly ongoing support costs. If undertaken, the project would be financed by a combination of an estimated $2.5 to $3 million bond and subscription revenue (subscribers would have the option to pre-pay three months of fees to help get the project off the ground). Within the Village budget, the “fiber fund” would be its own stand-alone enterprise fund, alongside water, electric and other funds.

Currently, 450 municipalities around the U.S. have publicly owned fiber networks, according to figures cited by Springs-Net. Of these, 89 extend to home users, so-called “fiber to the premises” networks. This is the type of network Springs-Net is proposing the Village build.

In Yellow Springs, the idea of a village-wide fiber optic network that would serve as an “Internet utility” for residents and businesses has been discussed for years. Last spring, Springs-Net held a public forum on the topic, and late last year, the group conducted an online survey of village residents to ascertain interest. That survey indicated that among the 367 respondents, 86 percent said they would subscribe to “a faster and more affordable Village-owned Internet utility service.”

But Village Council believes more work remains to be done to assess public interest. Last Wednesday, Council members discussed options including surveying villagers by phone, by mail via their Village utility bills and hiring an outside consultant to do a feasibility study.

“We absolutely don’t want anything that won’t work for the village,” said Springs-Net member Matt Cole, a local CPA.

The group’s proposal requires that at least 40 percent of villagers sign on to — and stay with — the municipal service to make the project financially viable. Nationwide, the average subscription rate for municipal fiber optic projects is 55 percent, according to network engineer Tim Barhorst, another Springs-Net member. If 60 percent of villagers signed on, a goal Springs-Net said is not unrealistic, the group’s financial model predicts strong fund balances from subscription revenues and the possibility of paying off the bond before its term.

But there are many variables that determine the project’s financial viability, and the group’s financial model is still a work in progress.

“Here’s the tipping point for me,” Village Manager Patti Bates said. “We have to figure out how long we can go losing customers and still be able to pay the bond out of [subscription] revenues before dipping into something else.”

Springs-Net member Sage agreed that subscription rates were the project’s wild card. “The biggest risk is that we wouldn’t get the subscription rate that we need to make the implementation successful,” he said.

But the group expressed confidence that as Yellow Springs residents came to understand the project’s purpose and benefits, they would embrace the idea of a homegrown Internet utility that provided high speed access, local support and maximum local control. Comparing this project to villagers’ strong preference for Village-owned water, Council President Karen Wintrow said, “I think [the municipal network] will be a source of pride.”

Benefits and next steps

Springs-Net emphasized the economic development benefits of the project. “[When] companies talk about where they want to locate, they want a big pipe to the Internet,” said local attorney Ellis Jacobs, another member of the group. Advocates say high-speed Internet would draw new business to the village, as well as make it more attractive to telecommuters and home-based businesses that likewise require fast Internet.

Ellis also highlighted the advantage to lower-income villagers. The Village would use the federal program Lifeline to provide discounted Internet service to qualifying residents, some of whom may not currently have home Internet access, he explained. “We have a real opportunity to address the [Internet access] equity issue in the village,” Ellis said.

Fiber optic infrastructure lasts for at least 30 years, and once in place, the Village would have the future option of running other services, such as video and telephone, over the network.

While Yellow Springs has many features that Springs-Net said make the project feasible, including housing density, a manageable scope and its own electric utility, Village Electric Superintendent Johnnie Burns raised some concerns. Most of the proposed fiber optic network would ride on the Village’s existing utility pole infrastructure, consisting of 1,597 poles. (Some lines would be buried, at 2.5 to 3 times the expense of aerial lines.) The Village owns the majority of poles, but AT&T owns around 450, said Burns, and right-of-access would need to be negotiated with that company. Burns also pointed out that 180 Village poles need to be replaced, a process he called slow.

These and other technical details require further examination, which could come from an engineering study or a design-build process if the Village goes ahead with the project. Springs-Net would likely remain involved in an advisory capacity, but would not lead the implementation of the proposed network. Meanwhile, Council members plan to discuss the Springs-Net proposal further at their next meeting, and Manager Bates will begin gathering information from her counterparts in municipalities that have implemented a fiber network.

In a follow-up interview this week, Springs-Net member Cole expressed optimism about the project’s future. The vast majority of villagers already pay for Internet service, he pointed out.

“As long as we’re paying for it, we might a well get something totally awesome and be paying ourselves rather than a few major suppliers,” he said.