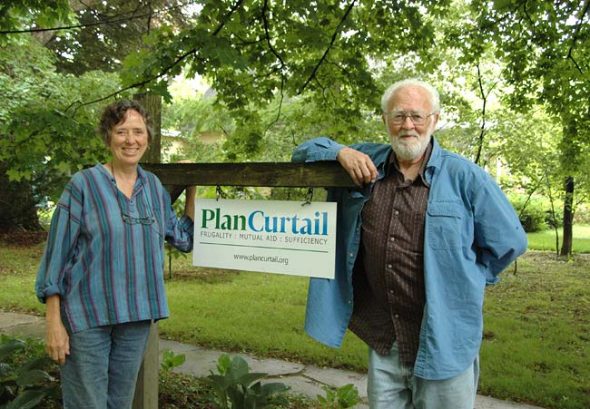 “You have to track your energy choices and see which will make a difference — that’s the planning piece — then you have to begin cutting back, or curtailing, your personal energy use,” Murphy explained in an interview last month.

The wife-husband team recently started a nonprofit focused on empowering individuals to take “personal responsibility for climate healing,” as the organization’s tag line expresses it. They named their new nonprofit — you guessed it — Plan Curtail.

“We’re looking to empower individuals. If people feel they can do something, they really can make a difference,” Morgan said last month.

They launched their organization’s website, http://www.plancurtail.org, this spring and hung their shingle in May outside the white house on East Whiteman Street that was the longtime home of Community Solutions, which relocated in March to larger quarters on the Antioch College campus. Both Morgan and Murphy helped run Community Solutions for over a decade; Morgan’s grandfather, Arthur Morgan, was the organization’s founder. Murphy stepped down as research director last June and the couple briefly entertained thoughts of retirement, then decided to dive back into climate activism and climate healing from a perspective they believe is both somewhat novel, and deeply needed.

“Many people are pushing for technological solutions [to climate change],” Murphy said. In several pieces on the Plan Curtail website, including in a reflection from January about the latest Paris climate talks, he makes the point that renewable energy sources (for example, solar, wind and hydro) and energy efficiency are the “two main paths” most people, including many climate activists, prioritize as solutions to global warming.

“I saw no reference from the Paris talks on the possibility of reducing energy consumption deeply and quickly,” he writes.

But in fact such reductions are both possible and essential, he and Morgan believe. And individuals can do it — though they may need the metrics and methods that Plan Curtail seeks to provide in order to track, manage and reduce their energy use.

For example, the website, which serves as the organization’s main outreach and information vehicle, provides guidelines for creating energy budgets in five key areas: housing, cars, food, goods and services. The first three areas are especially important, as they contribute the most to each individual’s, and each household’s, annual carbon emissions. According to the International Energy Agency’s 2015 figures, per-person carbon dioxide emissions of Americans is 16.2 metric tons per year. The world average is 4.5 metric tons per person. And the amount of emissions required to meet the international goal of reducing carbon emissions by 80 percent in 30 years? Just 1.5 metric tons.

Getting there is going to require deep cuts in energy use — curtailing, Murphy said. “As long as we do very low-impact and feel-good steps, we’re continuing to fool ourselves,” he said. Such steps might include buying energy-efficient appliances but at the same time increasing the number of gadgets in the home, or using “green” products that are more about marketing than actual lowering of carbon dioxide emissions.

Murphy recommends that people be alert to what he calls “greenwashing” — one example he gives is a single bike rack in front of a skyscraper — and seek instead to make meaningful, measurable changes in their lifestyle. Examples include opting for smaller, more energy-efficient homes; purchasing a hybrid vehicle and replacing driving with biking and walking where possible; and eating in season, from local gardens and with an eye toward reducing meat consumption, especially beef, as cows are a big contributor to greenhouse gas emissions.

Smaller, simpler and more local doesn’t have to mean hardship, however. Morgan, a filmmaker, has spent significant time in Cuba documenting the ecologically sustainable practices of that society. Her first film, “The Power of Community: How Cuba Survived Peak Oil,” was released in 2004; she is currently at work on a second film, “Earth Island,” about Cuba’s response to climate change.

In Cuba and elsewhere, “people are successfully making changes,” Morgan said. “And they’re doing it with joy.” She added, “It’s not about getting richer and richer. [Lifestyle change is about] asking what’s enough? What’s sufficient?”

She and Murphy observed that even in environmentally conscious Yellow Springs, there’s lots of room for improvement.

“Even in our town … our lifestyle has not changed very much. Big houses are still being built,” Morgan said.

Hard numbers — metrics — can provide a wake-up call, which is why the Plan Curtail website emphasizes figures and graphs. “If we can’t measure it, we can’t manage it,” Murphy said. At the same time, he doesn’t want to overwhelm people with numbers and data; part of the organization’s function is to sort through “reams of information” and extract the clearest and most helpful perspectives and guidelines.

For now, Morgan and Murphy are the organization’s sole employees; both work on a volunteer basis to gather and present relevant research. They are aided by an advisory group made up of mostly local residents, and a close affiliation with the Post Carbon Institute in California. The organization accepts donations.

Wife and husband readily acknowledge that they can provide the rationale, but not necessarily the impetus, for meaningful lifestyle change. “We have the knowledge to make dramatic reductions,” said Murphy. “But [across the country] the will’s not there yet.”

When the will does arise, individual by individual, Mogan and Murphy believe people will find Plan Curtail to be helpful — and ahead of the curve.

“We hope that when people feel the need to make changes, they’ll find us and say, ‘Thank God,’” Morgan said with a smile.