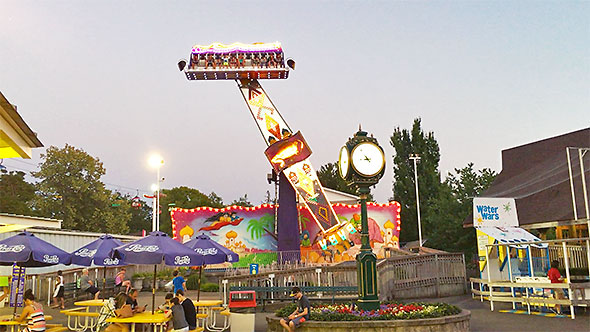 We picked up our daughter fresh from five days of EcoCamp and made our way out of town in the midst of a heavy downpour. We stopped at Dark Star along the way to see after a book. My daughter spotted it a week earlier and coveted it since—a thick tome with page after page of production pictures, annotated lyrics, and backstage stories chronicling the progression of the hit musical Hamilton both to the Broadway stage and on it. With the help of a knowledgeable clerk, we found the book Hamiton, The Revolution standing tall and high above us perched on the top shelf of Dark Star’s new books.

Back in the car, our daughter cradled her newfound treasure trove in her lap and settled in for the long drive. We put the musical’s cast recording on heavy rotation and pointed our car east toward Columbus. We were heading farther east and then north to upstate New York and my hometown Nichols, a small village set among dairy farms and along the Susquehanna River. 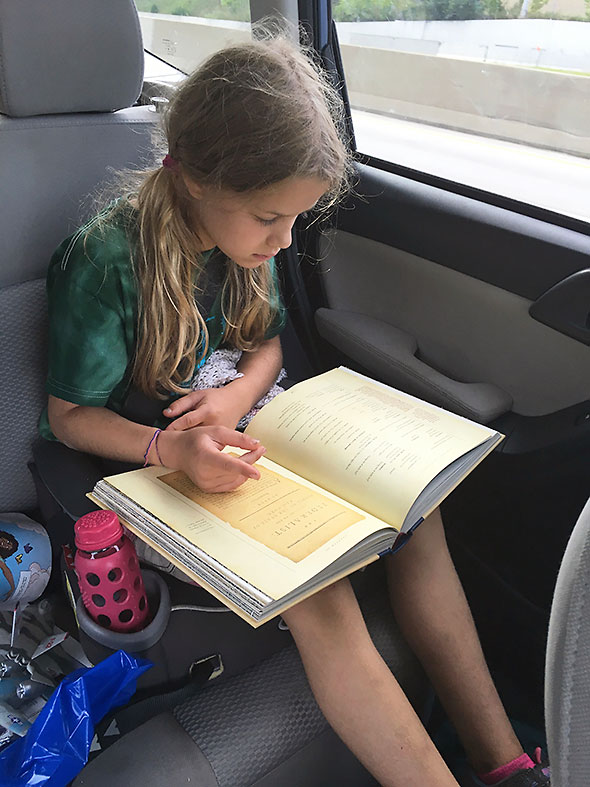 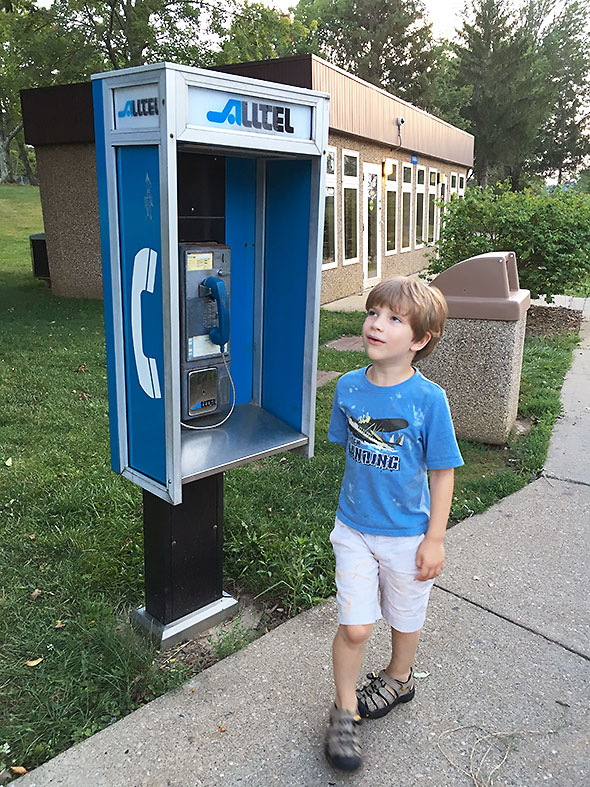 Leaving in the late afternoon, we planned to camp out in Pennsylvania but the hard rain soon puts a damper on that thought. The threat of early morning thunderstorms finishes off the notion entirely. Instead of Raccoon Creek State Park, I suggest a hotel in Pittsburgh. I don’t mind this turn of events at all. I’ve been conspiring for few years now to get the family to the Steel City. I’ve had the pleasure of visiting Carnegie Mellon University and the neighboring Carnegie Museum of Natural History where robots and dinosaurs roam in close proximity. So I’m actually excited. My son on the other hand is keen to get to Grandma’s house. He catches on fast when we deviate from our normal route and starts asking “Where are we? Where are we going?” as Ohio yields to West Virginia and then to Pennsylvania. 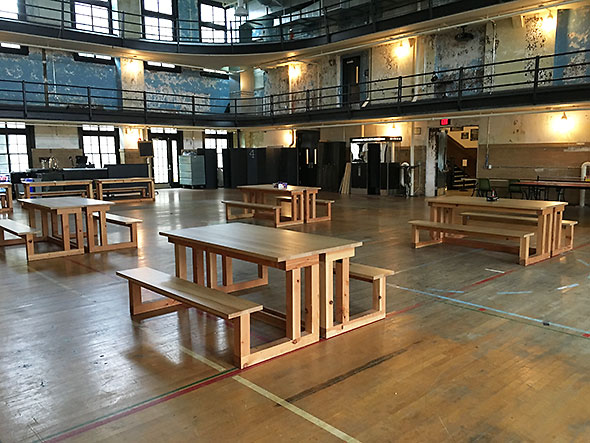 I have a plan however to win our young man over. Awaiting us, on the other side of the Ohio River, is a hotel that I discovered in my last trip to Pittsburgh. The Ace Hotel Pittsburgh opened on Super Bowl Sunday February 2016 in the former East Liberty YMCA. The rooms of this hotel are furnished in a Shaker sensibility mashed with Maker Movement. Many of the room furnishings and fixtures come from local sources.

Meanwhile my daughter is ambivalent to our progress on the road. She is deeply drawn into Hamilton. Listening intently while following along with her text, she listens to Alexander Hamilton try to convince Allen Burr to join the effort to write a series of essays defending the new US Constitution, essays that will become known as the Federalist Papers. Our nine year old has listened to the cast recording before but now it has her full attention. We are still hurdling down the highway when we come to Hamilton’s final moments. I’m in tears. My daughter’s in tears…both of us slammed by fate and unfortunate choices that changed the course of the country.

We arrive at the Ace Hotel after dark and park outside the East Liberty branch of the Carnegie Library. The library’s striking steel and glass box shares the block with the turn-of-the-last-century YMCA. Inside the Ace Hotel, I check in while the family checks out our digs for the night. It’s late—45 minutes before midnight—but the lobby is pulsing with music. My husband looks at me with…um…mild horror and says, “This hotel may be too hip for us.” 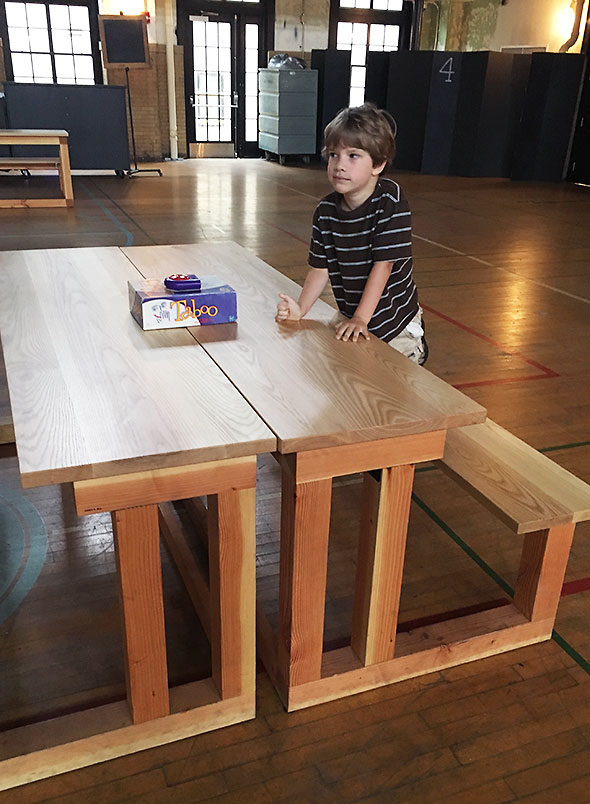 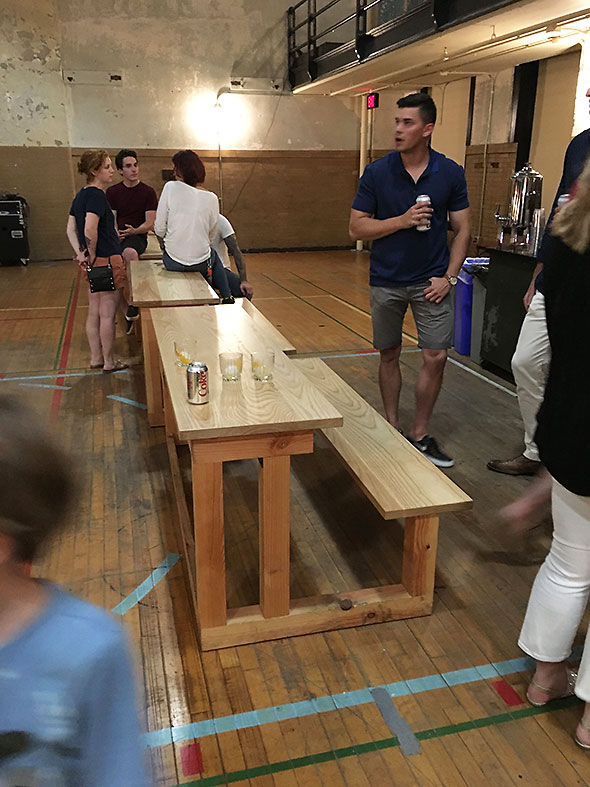 Luckily I notice a sign posted at a set of open doors away of the loud lobby and past the elevators. It reads OPEN GYM. I point Jeremy and the kids in that direction and hope for the best. The receptionist gives us a room on the third floor with a king bed and two twins. I collect our two key cards and join crew in the gym. The gym is just that—a gym, the athletic hub of the former YMCA—only now, in addition to ping pong tables and corn hole courts, it also has a bar and several benches/tables. The kids are thrilled to play corn hold and pulling at their father to come check out the game with them. I rally the family to unload the car instead but my feint has worked. We move into our third story room with a revived crew.

Settling in just before room service ends, we order room service…an experience that thrills the kids…and enjoy our midnight snack of charcuterie and deviled eggs.

The hard rain that forced us indoors slows our departure the next morning. After a luxurious breakfast of Russian pancakes and Eggs Benedict, the kids explore the East Liberty Library while Jeremy and I repack the car in a torrential rain. I’m inclined to linger at first. The Pittsburgh Children’s Museum tempts us but it’s six miles west nested in tangled traffic lanes near the city’s lattice of bridges. Plus, we’re pretty soaked, and morning rain is relentless. We promise ourselves a return trip and set north. Our destination Ithaca NY promises its own delights. My brother and sister in law are preparing a meal of pork chops and sweet corn. We can practically smell the home cooked meal from Pennsylvania.

While we drive north, I read the family stories about Layfette, the Revolutionary War general whose tactical brilliance and diplomacy shifted the balance of the war to the colonists. I read about his triumphant tour of the United States during the Madison administration. Greatly admired in the United States as one of its Founding Fathers, Lafayette contributed to the fledgeling country’s sense of unity. Foreign born, he cannot be claimed by any colony or state. He is not from the north nor from the south. He is our hero. His personification of selfless patriotism set the American ideal. 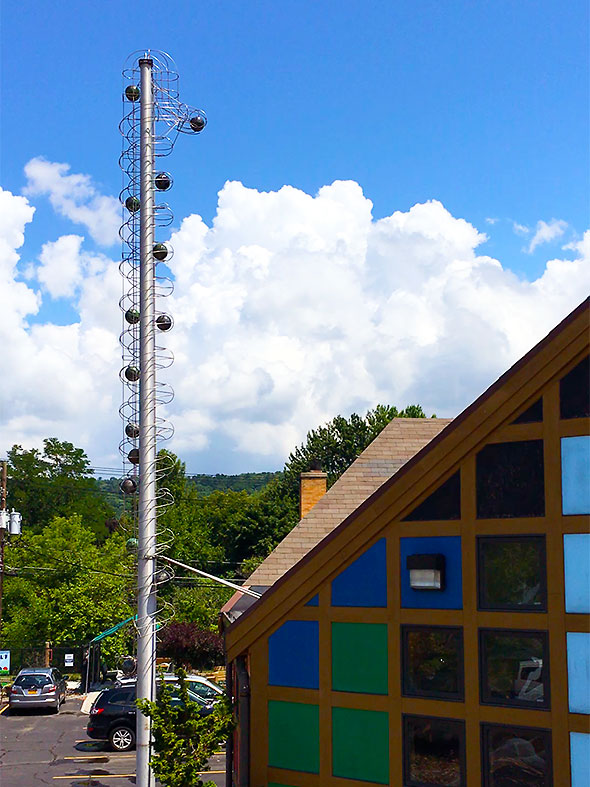 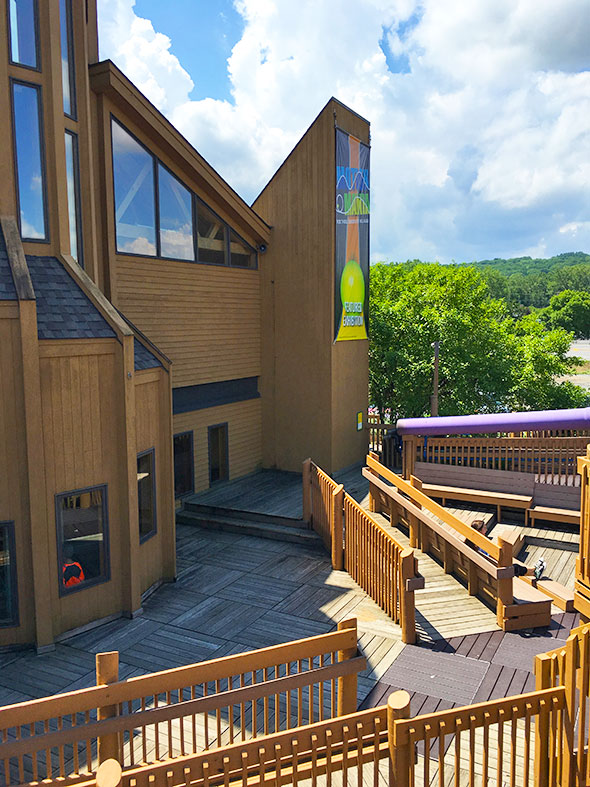 My brother’s house sits on a hill just east of the southern tip of Cayuga Lake. At the base of that hill is the wonder filled Sciencenter. On the third morning of our trip, when both the family and Finger Lakes recover from a much needed soaking, we take the kids down the hill to play. We’ve gone to the Sciencenter with the cousins on previous trips, but those trips were in the month of November. Now, on a warm August day, we have the chance to test the center’s towering decks and large-scale experiments outdoors. 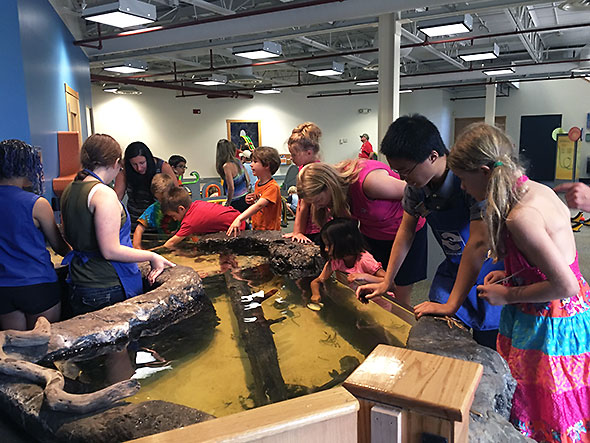 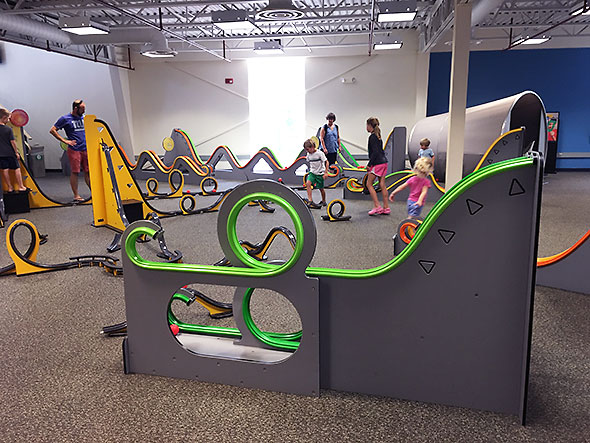 Inside we take in the tide pool flipping horseshoe crabs on their backs. The number of their legs tells us that they are more spider than lobster. In the exhibit room next to the pool, we launch red balls on sloping tracks and watch them perform loops, laps, and calculated leaps. The physicists in my husband and myself play adjacent toddlers and tweens…all experimenting at the wide variety of windings and whipping raceways. 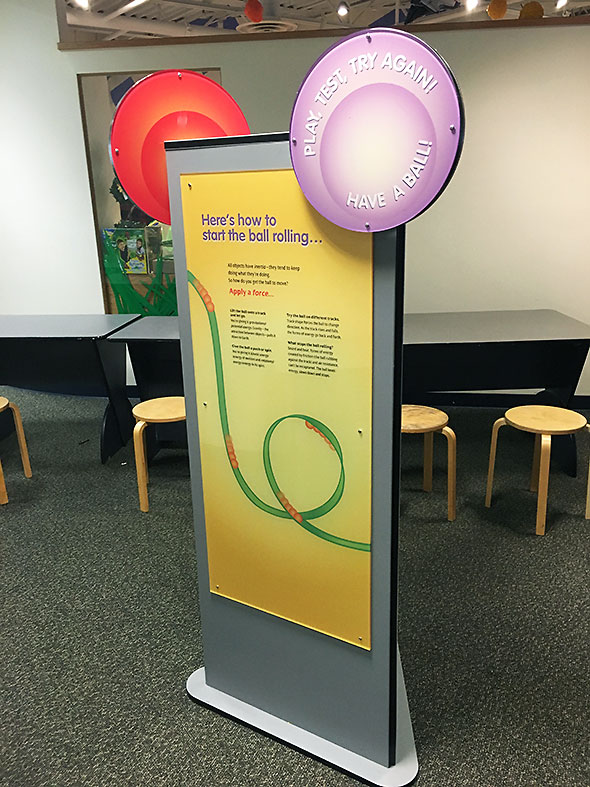 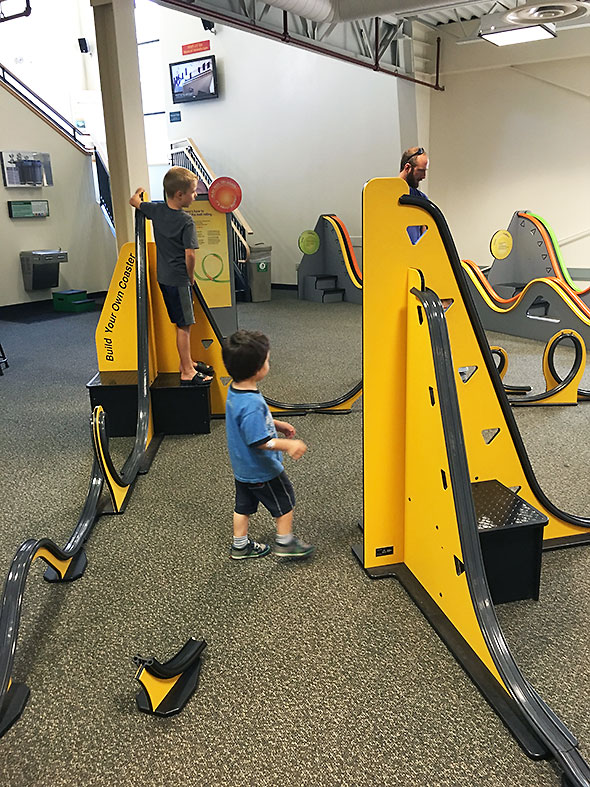 For the four days we spend in New York State, we feel almost like those little red balls swinging back and forth between Grandma’s and Grandpa’s house on the hill in Nichols and the cousins’ home on a hill in Ithaca. Our daughter takes this winging back and forth in stride. At my brothers house, she shows off her Hamilton book to her oldest cousin, a woman equally hooked on the hit musical. At Grandma’s and Grandpa’s, she takes responsibility for my mother’s maltese coaching the dog to calm itself when excited by all her company. Our daughter particularly loved trading stories about the puppy Bellatrix with her relatives…well established pet owners…and asserted herself now as a seasoned pet owner. 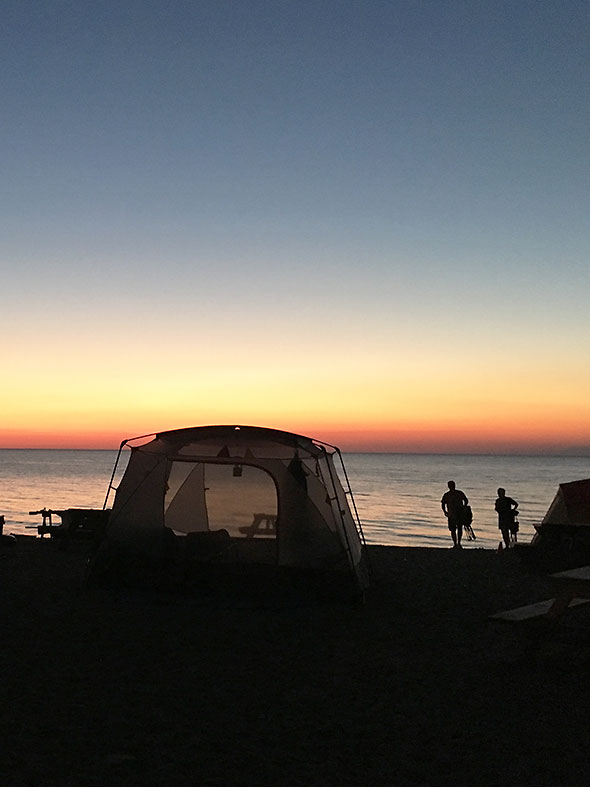 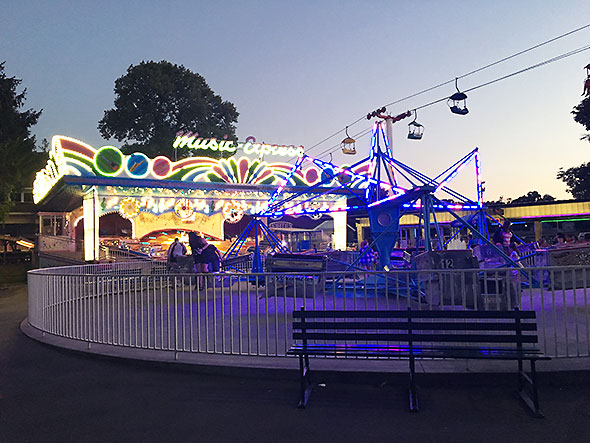 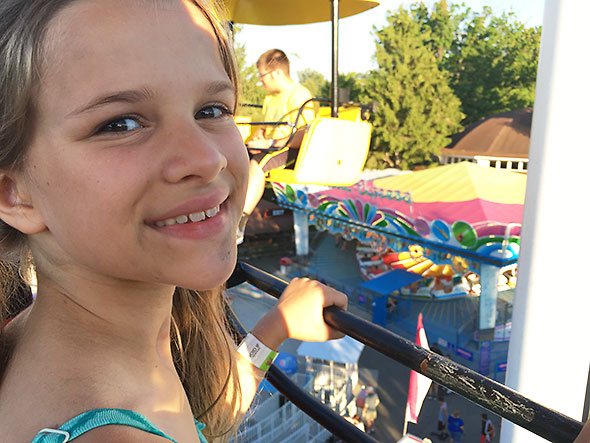 We complete our circuit midweek. We pack up our tent from Grandma’s and Grandpa’s backyard and pitch it one more time at Sara’s Campground in Erie PA. Once we set up on the shore of Lake Erie, we head over to Waldameer Park, an amusement park that in many ways reminds me of the Skyline Park of my youth. Sure, there are many rides at Waldameer that are bigger and faster than Skyline offered. My husband and kids are welcome to the pendulums, controlled free falls, and assorted roller coasters. I’m happy to stick to bumper cars, merry mixers, and the three story high ferris wheel. I make the mistake of riding the tame sounding Music Express once. But only once. There’s only so much torque this woman can take. 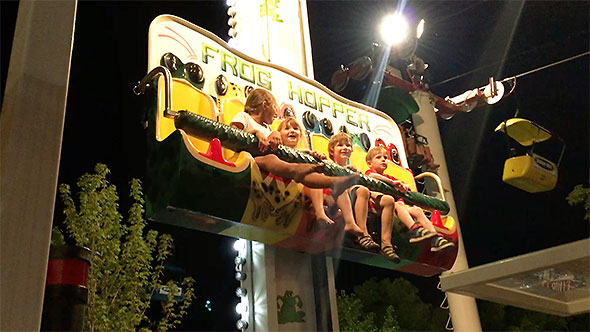 The next day, the family grabs a meal in downtown Erie before heading south. By mere chance, we happen upon an event hosted by the Erie Art Museum. Their front courtyard is lined with chairs and filled with scores of people listening to a band playing Mustang Sally. We order sandwiches at the museum’s cafe and join the crowd kicking back. Once the music wraps, we walk back to our car. At a street corner, my husband looks up to read a historical marker. He points its significance to the rest of us. Above us, we are astonished to find a black and gold plaque commemorating the 1825 visit of our friend Marquis de Lafayette. We are standing at the door of the house where our “nation’s guest” stayed on the Erie leg of his national tour. We learn the banquet held in his honor had a table so long that his host used battleship sails as awnings…fittingly sails from British vessels captured in the Battle of Lake Erie.

For the final leg of our vacation, our daughter queues up Guns and Ships where Lafayette first confuses and confounds the British. Jeremy and I did our best to confound our own kids in the counterclockwise turn we took this week. The question never was “Are we there yet?” but “Where are we now?” And the answer? Well, its many turns were not always welcome. The adventure always was.

2 Responses to “BLOG-For the Revolution”