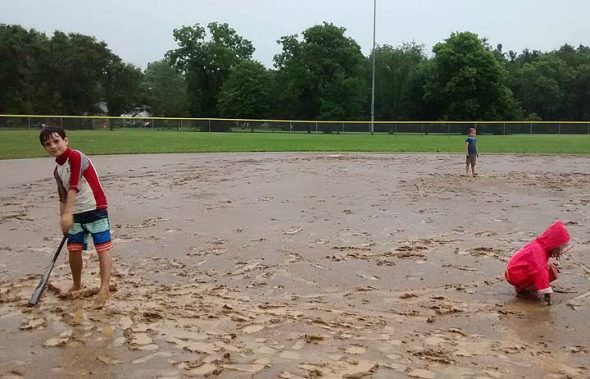 Slipping and sliding at T-ball

View a short video of the t-ball mudpuppies at play.

It was raining steadily, heavily, when I got to Gaunt Park at 6:20 p.m. (we start at 6:30 p.m.). The park was empty. Just me and the steady rain. Then around 6:30 p.m., two cars pulled into the parking lot — John and Hannah Purdin with their remarkable, hilarious, creative jokester daughter Sophia, 5. Next to them was Hannah’s sister, Leah McCullough, and her son Obedijah Artis, 3. It was raining still.

When my T-ball partners Becky Reed and her granddaughter Stefanie showed up, the rain had slowed to a steady drizzle. Her daughter, Jennifer Reed, showed up with our home run king, Tommy Moore, 8.

Virginia Caudill’s son-in-law Mike Gama-Lobo and her grandkids Morgan Gama-Lobo, 7½, and Marina “Mina” Gama-Lobo, 5 — they were visiting from Tanzania — arrived and got right out of their car, ready and eager to play. But it was still raining and we told Tanner Miller, 3, and his grandmother Hope that we probably would not play. It was too wet. And they left.

But nobody else left. And Lauren Shows showed up with her darling great-talking daughter Lucy, who’s 5-almost-6. Both mother and daughter were prepared for the weather, Lucy wearing a full-length pink hooded raincoat, and Lauren in a classy all-black hooded rain jacket.

Should we? Or not?

And as the rain seemed to stop, for five minutes, we decided to play and we did, having a slippery, muddy T-ball time, the rain coming and going for the first 10 to 15 minutes. In that time Tommy Moore did his usual, hitting home run after home run. Avery Tobias, 6, showed up at 7 p.m., and she came right out to the sticky mucky diamond, hardly fazed by the mud at all. Morgan Gama-Lobo was another home-run hitter and a shifty speedster. He outran dad Mike who chased him, threatening to tag him out (there are no outs in T-ball, so it was just a ruse, but a rousing and romping helter-skelter one). Mina (Marina Soleil) Gama-Lobo was a strong hitter and terrific sprinter, leaving her enthusiastic and fun-loving father in the dust as he chased her as he had his son earlier.

Lucy Shows-Fife,  in her stylish polka-dotted rain boots, worried about us all slipping and falling on the muddy diamond, encouraging us to avoid the most muddy spots.

Leah McCullough brought her boy Obedijah, 3, to the plate, but when he hit the ball, he trekked immediately, unstoppably, irreversibly down the third baseline, ignoring all our calls to him to come to first, come to first! When it was clear he was not coming back, we got Leah to bat, to hit and run — it’s really fun to whack that ball off that tee — and she hit one hard, fast, right past John and Mike in the infield. When she ran the bases her son Obie saw her and caught up with her at third and followed her home.

Sophia Purdin, 5, our incorrigibly self-distracting young artist-comedian-entertainer, did her hallmark routine at the plate — she was delighted to stick her bat’s head into mud, and she did; she was delighted by the mud sticking to it, which she happily peeled off; she bent forward at the waist, bringing her head down below the ball, and like a swan, she peered up at the ball, studying it for some reason — never, it seemed, to want to simply hit the ball. Watching her is a little like watching a miniature Charlie Chaplin. You never know what she will do next. Then her wise, athletic, speedster of a mother, Hannah, called from where she stood in the infield, “Your turn is about up,” and Sophia quickly lifted her bat and hit the ball on her very first swing. Hannah then took a turn at bat as her sister Leah had just done and she hit a groundball right into the waiting hands of her joyful loving husband John, one of our perfect volunteer coaches this summer. He tried to catch her before he got to first, intent on tagging her out. But Hannah was quick and agile, showing an uncanny and impressive ability to pivot and dodge — she was quite sure-footed in all this precarious mud mud mud — and she beat her unbelievably wonderful spouse in their race to home.

Jennifer Reed, Tommy Moore’s mom, rushed home to her mom Becky’s house to get three trophies. Becky thought we should give trophies to the three kids who had come out that night but who would not be able to make it to next Friday’s final night of the season, our wiener roast potluck picnic and trophy night. Jennifer was generous — who wants to run home in the middle of an outing? — and she was quick, allowing us to give Morgan Gama-Lobo and Mina Gama-Lobo their trophies (they will be on their way back to Tanzania next week). Both children were very surprised and pleased.

“I’ve never got a medal or trophy for anything,” Morgan said, his happiness and gratitude a potent curative for all that ails you.

Lucy Shows-Fife was the third child to get a trophy — she and her family will be on vacation next week — and she was thrilled. As we said our goodbyes for the season she gave me one of those priceless gifts I get from so many of these T-ball children: I said, “Goodbye, it was wonderful playing T-ball with you,” and she agreed, nodding. Then, after a moment’s pause, she was thinking about something, mulling something over, she said — remember, she’s a 5-year-old — “I am actually going to miss you.”

What a complicated, thoughtful, surprising and generous little girl. I was and am humbled and stunned. Thank you, Lucy. I will miss you, too.

Next Friday, Aug. 5, is our final night of the 2016 season. We will have a shortened evening of play followed by our annual wiener roast picnic potluck, after which we give a Perry League trophy to every child who shows up. It is a potluck picnic and if you want to bring something —please do — you can go to the Perry League Facebook page. We have a list there of things we need to make the picnic wonderful for all.

Thank you, all you people who are this amazing Perry League: all you kids, all you parents, all you grandparents, all you brothers and sisters, all you aunts and uncles, all you cousins, nieces and nephews, all you former T-ballers, all you Yellow Springs News people, all you readers and T-ball supporters, all you volunteers who take the field with me, thank you, thank you. It has been a remarkable, wonderful, surprise-and-love-filled season. Come on out Friday night. Bring your loving, generous self and help us cap this season, as we should, with love and happiness for everyone.