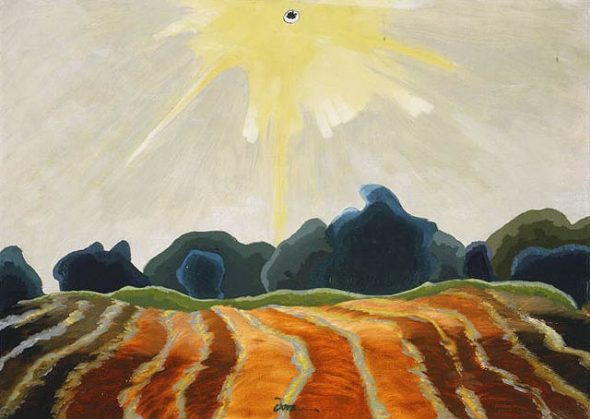 Summer is slanting into fall. The sun is lower, the shadows on the bike path gather sooner, angle further. Walnuts drop from their high branches, explode onto the road. In a softer counterpoint, walnut leaflets twirl down in small, erratic spirals. I observe their yellow twinkle. And say good-bye — no regrets — to the summer sun.

Summer is a sad season for some of us. I’m one of those strange souls whose heart lifts as September nears. It’s not that I dislike summer. How could I? Summer is like the perfect job applicant — best schools, stellar references, winning wit and smile. Summer is beautiful, more beautiful than you or I will ever be! But fall. Fall is slightly seedy, a tad disreputable. There’s that whiff of decay, of course, and the distinct and accurate sense that things are coming apart at the seams. Fall is a thrift-store velvet jacket, wine-stained purple, with your elbows showing through.

Fall is fall. Please don’t talk to me of autumn. It’s a pretty word, probably coined by a summer-loving person. Autumn is pure sonata; fall is a sonata gone a little atonal — accompanied by mysterious clonks and clinks and scuffed-up shoes scuffing up leaves. Autumn is chilly abstraction, while fall is so endearingly literal! Fall, get it? The season where things, you know, fall.

September is the hinge, the flex between summer and fall. At night — tonight, say, as I write this piece — the crickets and cicadas continue their screech. Talk about atonal! This is music only a cricket or cicada could love. I take the dog out, and the whine, the hum, the pulse of these late-summer insects seems to come from the night itself. Perhaps from the stars, hazy and high up, or the moon, a white horn waxing to a perfect stone set in the sky’s riverbed. There’s enough summer left that the night-flying moths still loiter under the streetlight’s weird glow. And follow me in from outside, one or two darting into the living room each night. They are frantic for light, crazy-beating their wings against the bare bulb that sits, like a little sun, in the center of the lamp’s conical universe. A delicate, cream-colored moth visited one night last week. I tried to coax it back into the night. But it wouldn’t go. In the morning I found it on the living room floor, folded like a tiny napkin.

I’m happy to wave good-bye to summer, but I’m not quite prepared to hail fall with a hearty hello. Mostly because fall isn’t really a hello kind of season. From its very start, fall is a good-bye, the best kind of good-bye — a long and lingering one. Fall is a train ride down a straight track where the station you’ve left is visible for miles. You’re leaving, you’re leaving, you’re leaving … fall is an endless leaving. Even its leaves are leaving! Yet there’s a sweet regret in the southern route from limb to earth.

Years ago I rode a train, south to north, north to south, Virginia to New Jersey and back again. In truth, I rode the train in all seasons, but the only season that evokes the ride is fall. Perhaps that’s because the journey itself toggled me between seasons, and the season I was always longing to arrive at was fall. Invariably — in memory at least — I boarded the train in Virginia summer, arrived in New Jersey fall. The miles in between, witnessed from my Amtrak window seat, were a time lapse of the seasons, weeks of transformation sped up into hours. The journey back again? Away from fall? Hardly to be borne.

But isn’t that what we’re doing all the time? Doing in time. The moment fall is here, fall is also falling away. Our lives are like that, too. We’re hurtling forward — this train we’re on, it never goes back! — yet forward turns out to be a vast succession of leavings. This is a melancholy view, I know, but also a true one.

Green and showy summer seems blind to the evidence of endings, and the poignancy of that? Hardly to be borne. That’s the sadness of summer for me, I think — a sadness for summer, her ditzy razzle-dazzle cluelessness. But fall. Fall knows it’s falling, we’re falling, and the long, slow unwinding (let it be long! let it be slow!) is where all the beauty and terror of life happens. Before we settle, wings folded, to the ground.