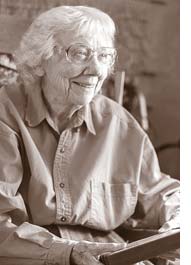 As a history teacher with a fondness for timelines, Charlotte Gorden would want you to know she arrived in Yellow Springs the year the movie “Blackboard Jungle,” featuring the song “Rock Around the Clock” by Bill Haley and the Comets, was a hit; Joseph McCarthy was censured by Congress the same year. As an English teacher, Charlotte would insist on avoiding needlessly compound sentences like that above.

She enjoyed engaging and challenging her students; they responded in kind. Much to her delight, a recent story by one of her former students, Eve Sullivan, appeared in a Parade magazine article on favorite teachers. Charlotte also enjoyed engaging and challenging those in authority. She continued to teach while pregnant in an era when that was considered questionable. She wrapped up her career with a victory for teachers’ rights.

Charlotte then returned to two of her original loves, violin and travel. She studied violin with Robert Young and performed for years with the Miami Valley Symphony Orchestra. She traveled extensively in the U.S., Latin America and Europe, personally connecting to the events and places in history that had fascinated her: the Alhambra, Renaissance Italy, Simón Bolívar, Chichén Itzá, Gettysburg and the Detection Club founded by Agatha Christie,

In Yellow Springs, she cherished her downtown mornings with pointed political discussion and round-ups of town news. She served on the board of Yellow Springs Senior Citizens for eight years. She delighted in her birthday parties. She shared sushi lunches with confidantes and laughed with friends during their weekend visits. She was deeply grateful for all the local love and support which enriched her life.

Charlotte Gorden passed away Aug. 20, 2016. Her husband, Ray, passed in 1995. She is survived by her children Greg and Karen, her grandson Spencer and her cousin Zelma McKibben. There will be a remembrance gathering at 5:30 p.m. on Saturday, Sept. 17, at 504 Phillips St., where we will share memories and celebrate her life with a bit of music and food.