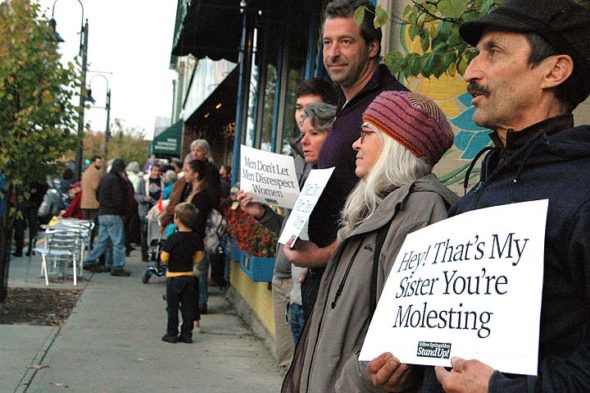 A group of about 250 demonstrators gathered on Xenia Avenue last week to “repudiate the bigotry and disgraceful behavior” exemplified by Trump’s comments on the “Access Hollywood” video. Among them were, from left, Will Gregor, Teresa Dunphy, Tommaso Gregor, Beth Holyoke and Andy Holyoke. (Photo by Matt Minde)

Local men and women Stand Up!

Last Wednesday, Xenia Avenue was lined, as it sometimes is, with people holding signs with bold political slogans and rallying for social justice. While the group was gathered in response to recent comments made by presidential candidate Donald Trump, the message was just as much intended for the men holding the signs as it was for those passing by.

An ad-hoc group called Yellow Springs Men Stand Up!, organized by resident and local psychologist Bob Barcus, brought the group of roughly 250 people together. After watching Michelle Obama’s Oct. 13 speech at least three times, in which she addressed the “Access Hollywood” footage in which Trump brags about behaviors toward women that many would call sexual assault, Barcus felt that as a male, it was his duty to help continue the conversation of Obama’s speech, especially among other men. He wanted to create a forum in which he could “repudiate the bigotry and disgraceful behavior” exemplified by Trump’s language, he said last week.

“Trump blew off as braggadocio talking about women like that,” Barcus said. “I wanted to say [to the women in town], ‘We’re with you.’ We don’t accept this behavior. We don’t participate in it and we don’t condone it.’”

Barcus called a number of men he knew to see who would be interested in participating in an event that would address these issues. Everyone he called was as repulsed by Trump’s comments as he was — and as moved by Obama’s speech — and was very interested in helping Barcus out. A group met at the library to brainstorm ways in which they could demonstrate this sentiment. The group ultimately decided to stand for a half an hour at 6 p.m. on Xenia Avenue, bearing signs that expressed their disapproval and disgust regarding the harassment that women face every day. Barcus advertised the event by word of mouth, and by leaving fliers throughout the village.

Demonstrators gathered near the center of town along Xenia Avenue and radiated up and down the street. Organizers were surprised at the size of the turnout, and estimated the group was 60 percent male. Men, women and children of all ages held signs and stood together. Signs included  “Hey that’s my daughter you’re molesting,” and “One bad hombre for a (nasty) woman,” which referenced Trump’s recent choice of words in referring to Hillary Clinton and Latinos living in America. Barcus said he was quite pleased with the turnout, and noted that many passing cars honked in support.

The idea was to keep the demonstration simple, said resident and fellow organizer Jim Klein. The Stand Up! event was intended to be a much more personal and straightforward man-to-man conversation than the average rally.

Resident Jeff Simons also helped organize the demonstration. Simons said that he and the other organizers were interested in putting on the event because they recognized that not only were the attitudes expressed by Trump hurtful, but that it was men’s responsibility to examine their own biases and thoughts that contribute to the climate where bragging about sexual violence can be chalked up to “locker room talk.”

The brazenness of Trump’s comments, and his status as a presidential candidate, helped bring the topic of sexual harrassment to the fore, in Yellow Springs as across the nation. One woman last Wednesday was holding a sign that read in part, “YS women need and have been needing support against abuse and harassment too!” while another held a sign noting that there are men in Yellow Springs who are likewise responsible for demeaning remarks and threatening behavior. Barcus said that he wanted to draw attention to sexual harassment because it creates a climate in which increasingly violent acts against women are possible and tragically common.

A 2014 study by nonprofit group stopstreetharassment.org found that “65 percent of all women had experienced street harassment. Among all women, 23 percent had been sexually touched, 20 percent had been followed, and 9 percent had been forced to do something sexual.” According to the National Sexual Violence Resource Center, one in five women will be raped in their lifetime, while “46.4 percent of lesbians, 74.9 percent of bisexual women and 43.3 percent of heterosexual women reported sexual violence other than rape during their lifetimes.” And according to National Sex Offender Public Website, a federal and state government partnership, only 16 percent of rapes are reported to law enforcement.

While Barcus and the other organizers felt the Yellow Springs community would be well served by the conversation, they were also interested in reaching a wider audience. Simons said that area news outlets were contacted in order to show that men in Yellow Springs, at least, did not stand for demeaning attitudes and were making an effort to recognize harmful behaviors. Given that the areas surrounding Yellow Springs are heavy with “Trump for President” signs, he said, it was important to get this idea across.

Currently, there are no plans to organize another event, Barcus said, but he feels last week’s demonstration was productive and needed, and that the message still stands that he and the other participants support anyone who has been a target of Trump’s disrespect.

“Obviously, standing on the sidewalk is not going to change the world, but even so, we wanted to stand up for the community and stand up for human rights,” he said. “All it took was a few phone calls.”