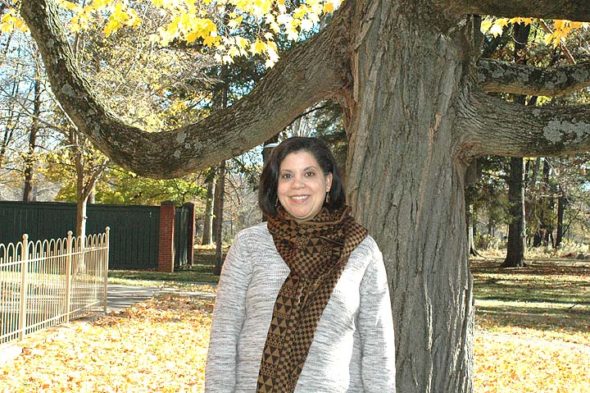 Susan Lee joined Antioch College in October as the new dean of student life. Lee previously worked for Antioch in 2001, and has 25 years of experience in higher education administration. (Photo by Audrey Hackett)

Susan Lee has worked with college students for 25 years. Her approach is simple and heartfelt, she said in a recent interview.

“I bring great love for students. And I’m always wanting to ensure that they grow and develop and thrive.”

As Antioch College’s new dean of student life, Lee is responsible for guiding the growth of a small, passionate community of students on a campus that’s in the midst of its own evolution and change. Lee replaces Harold Wingood, who served in an interim role that combined enrollment and community life. Luis Rosa had previously led the college’s community life department.

Lee was hired this fall, and began at the college Oct. 17, one of three new senior administrators. (The other two, Mark Reynolds and Bill Carter, have been profiled in previous issues of the News.) She is new to Antioch — but not brand new. In 2001, she served as the college’s director of multicultural affairs and employment equity. Family obligations drew her out of the area after a year in the position, but she liked Yellow Springs and “felt very much aligned with the mission and values of Antioch College,” she said.

Coming back to a relaunched Antioch is exciting, she added. “It’s interesting to be part of the reboot. I want to see the school do really well — not only survive, but thrive.”

For the college to thrive, its students must flourish. And that’s where the dean of student life comes in. Lee’s job is to develop and coordinate the resources that help students succeed in all aspects of college life. She oversees four departments at the college that together employ about 10 staff members: residence life, academic support services, counseling and health services and public safety.

“My main focus is to make certain every student has the best experience possible,” she explained. She calls this a “holistic student experience,” embracing not just academics but all the ways in which students grow and change in their college years. Some may view the dean as a sort of “police” for student behavior, or a parent surrogate, but she sees the role in quite different terms.

Lee, 56, is a Cleveland native who is happy to be back in Yellow Springs after a taste of the village 15 years ago. She most recently served as associate dean of student life and director of diversity and inclusion at Earlham College. Prior to that, she held several senior administrator positions at the College of Wooster, her alma mater, and the Cleveland Institute of Art.

Her career focus emerged while she was still an undergraduate at Wooster. While originally planning to pursue clinical psychology — her mother and brother’s field — she became interested in the experiences of college students, particularly students of color like herself on majority-white campuses.

“I was looking at ‘campus climate’ before I knew the term,” she said.

That interest led her to Ohio State University for a master’s degree in higher education administration and counseling psychology, followed by a variety of dean and director roles working directly with students.

Issues of diversity and inclusion have always been central to her work. “They’re just a part of who I am,” she said. Her previous position at Antioch in 2001 was her first role that focused specifically on equity and inclusion, and she went on to lead diversity programs and initiatives at the College of Wooster and Earlham College. Lee brings that professional expertise, as well as a deep personal concern with diversity issues, to her new job at Antioch.

And indeed, diversity and inclusion are essential aspects of the position, according to Antioch College Provost Lori Collins-Hall, who helped hire Lee. “You can’t have a dean at Antioch without a focus on diversity,” Collins-Hall said.

Asked about incidents at the college last spring in which, according to a report in the May 18, 2016, Antioch Record, students of color experienced racially motivated harassment, Lee said she was “surprised and really disappointed by those events … which are so inimical to what the campus stands for.” Yet the incidents resonated with her own experience, she added.

“I remember very vividly what it was like to be one of very few African American students on a predominantly white campus,” she said.

Another challenge facing Lee is student retention. Last year’s entering class dropped to 44 from 66 during the first nine months of the academic year, according to a report in the Aug. 10, 2016, Antioch Record. “Retention has always been on my radar, and it certainly is here at Antioch,” Lee said. At the same time, she emphasized that everyone at the college, not just student life staff, plays a role in retaining students.

“Retention is everybody’s job, from the president to the kitchen staff. It’s up to all of us,” she said.

Students drop out of college for a variety of reasons, she said, including finances, a desire to be closer to home or to a significant other and factors related to academic or emotional readiness. Addressing the range of issues that prompt students to leave school before graduation is critical, she added. But retention, in her view, isn’t about hanging onto a student regardless of the challenges that arise.

“It’s also about telling a student, ‘Look into your heart and decide what’s best for you,’” she said. “And sometimes retention is having the ethical fortitude to let go of a student and stop taking their money.”

Observing Antioch students during her first weeks on the job, she’s been impressed by how hard-working and passionate they are. But she also senses a high level of stress, and believes the campus could benefit from more joy. “There’s commitment and love for the college, but where’s the element of joy?” she said.

Lee has worked with thousands of students over the years. She’s seen students mature and make difficult and brave decisions — and change the color of their hair countless times, she laughed. Sometimes it is hard to know if her work has made a difference to an individual student. But colleagues, parents and students themselves will often let her know.

One student who had struggled to adjust to college came up to her later and said, “Thank you for not letting me give up,” Lee recalled.