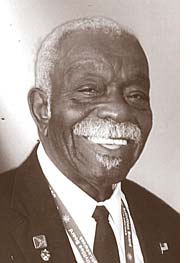 Edward V. Willett, 95, an original member of the Tuskegee Airmen, died on Nov. 12, 2016, at Lane Park of Huber Heights, in the Memory Care Unit following an extended illness.

He leaves a legacy of world travel, knowledge, wisdom and abundant life experiences to his beloved wife Mary (Durgans) Willett, of Yellow Springs; brother Charles Wayne Willett, Sr., of Chicago, Ill.; children and stepchildren, listed below in the message to his family; and grandchildren, great-grandchildren and a host of family and friends.

Edward was preceded in death by his parents, Edward and Ruth Willett, and his brothers, Douglas Willett and Lee Marvin Willett.

Edward prepared this message for his family:

To my Grandsons and Granddaughters — I, your grandfather, Edward Vernon Willett, was born June 10, 1921. While still in high school, I joined the 8th Infantry of the Illinois National Guard. This was two years, six months and 17 days before joining the U.S. Army on Nov. 7, 1940. I served with the 184th Field Artillery Unit base at Camp Custer, Mich. After two years, the 184th Unit was changed to two Artillery Battalions; I was assigned to the 930th Field Artillery Battalion, Camp Butler, N.C.

In the spring of 1943, I went to Chicago and took the Army Air Force Cadet examination at the local Air Force cadet board. On or about November 1943, I received orders from Washington D.C. to report to the Air Force cadet classification center at Keesler Field in Mississippi. At this center, cadets were classified as to which training group they qualified for, such as pilots, bombardiers, and navigators.

I qualified to take the twin engine pilot training. We received the best training. “The best training in the world” sounds like a big statement — and it is — but that’s what America’s young got when they were accepted by the Army Air Force for training as “Pilots, Bombardiers and Navigators.”

I was honorably discharged from the Army of the United States Nov. 28, 1945.

After World War II, I held several jobs until I started working for the Chicago Police Department. From 1955 until retirement in 1986, I worked as a beat officer, walking a beat, because very few Negro officers were assigned to squad cars, even in the Negro Community. I also served as a detective, evidence technician and supervisor of graphic arts. During the “Civil Rights Protests,” I was assigned as a human relations investigator. I retired from the Police Department as an administrative assistant in June 1986, and later worked as an investigator of abused children for the Illinois Department of Children and Family Services.

A memorial for Edward will be held on Saturday, Dec. 3, 2016, at 1 p.m., at the First Baptist Church in Yellow Springs. The family wishes to extend special thanks to Pastor John Freeman and Porter-Qualls-Dunlap Funeral Home; Darryl Harrison, barber extraordinaire; the dedicated staff and medical team at Lane Park of Huber Heights, Hospice of Miami Valley; Pastor William Randolph, Jr.; and First Baptist Church.

In lieu of flowers, donations can be made payable to the Robbins History Museum Project, Tyrone Haymore, Director, P.O. Box 1561, Robbins, IL 60472, 708.359.8701, robbinshistory@yahoo.com. According to the museum’s website, http://www.robbinshistorymuseum.org: “Your donations are 100 percent tax deductible to this 501(c)(3) cultural educational institution, seeking to raise $1.8 million to repair the badly vandalized Fuller Home, to become the new permanent home for the Robbins History Museum. Some of the museum’s unsung heroes include pioneer aviators Cornelius R. Coffey and John C. Robinson, who in 1931 in Robbins, Ill. built the first black owned and operated airport in the U.S. The pair trained pilots who later became Tuskegee Airmen, African-American aviators who fought in World War II.” Edward V. Willett is one of the ten original Tuskegee Airmen from Robbins, Ill.