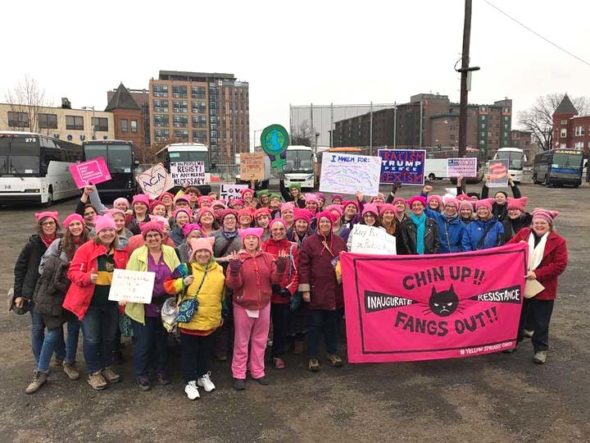 After riding through the night via chartered bus, and deposited in a Washington, D.C., parking lot after sunrise Saturday, Jan. 21, 55 women from Yellow Springs prepared to join hundreds of thousands of people from across the country streaming toward the National Mall for Saturday’s Women’s March on Washington. The bus passengers represented a portion of village residents who particpated in the historic event. (Submitted photo by Lydia, the busdriver)

Local preparation for last weekend’s Women’s March on Washington may have been as significant for many Yellow Springs women, and for the community at large, as the actual march itself.

It was during march preparations that the community came together and revealed its power as a source of unity and support.

In hat-making gatherings at homes and the Emporium; in the preparation of sack lunches to send off with bus riders; in the assembling of supplies and necessities to make the trip comfortable — community members united in purpose and care.

Particularly significant for villager Katie Rose Wright was the financial sponsorship that allowed her and seven other local women to have a seat on the bus that transported 55 Yellow Springers to the D.C. march. The bus was chartered by Christine Monroe-Beard.

“It was a totally grass-roots sort of thing,” Wright said. The 33-year-old said the sponsorship effort began when an older woman in her life offered to pay Wright’s way to march on the woman’s behalf. Wright said she initially declined out of a “significant crowd fear,” but when two more older women made the same offer, she felt obliged to accept. She soon learned of several other local women who wanted to go along on the bus but couldn’t afford the $100-plus ticket, so Wright set out to help arrange their passage. Nine women, one man, and one business (Dark Star Books) contributed to the effort. Former Yellow Springs resident Leigh (Adoff) Hamilton donated all the way from her home in Germany. said Wright, who was thrilled with the response.

The bus send-off, then, on Friday night in front of Peach’s, was a celebratory gathering as community members cheered the group’s departure. Hat-makers passed out pink cat-eared “pussy” hats; local cook Norah Byrnes and her crew had made hearty, treat-filled sack lunches; Elizabeth Wiley and Liz Valenti, of Wheat Penny, donated so many pizzas they filled a couple of the bus’s overhead compartments. And then there was a rider’s grandmother who brought a plate of homemade chocolate chip cookies.

Wright said she was struck by the number of elders out in the chilly, damp, late-night air. She also appreciated the range of ages of women on the bus, the youngest being 14 and the oldest past 65.

Four teens in all were aboard, with three being sponsor recipients. Sisters Alaina and Julia Hoff, 16 and 15, respectively, and Julia’s best friend Peyton Gray, 15, were part of a group that included the girls’ mothers, Wendy Ricks and Erin Hankie, and four others. including Wright, who stuck together during the march. Being nine in number, they called themselves “The Ninesies” as a means to stay together amid the crush of D.C. marchers. Wright said that whenever anyone got separated, they’d yell “Ninesies” until reunited.

Complicating their passage some was the fact that Alaina was in a wheelchair. An ankle injury earlier in the week looked at first as though it would derail the family’s march participation. The wheelchair, loaned free of charge by the YS Senior Center, made the trip possible again.

The group caught the eye of the ABC Worldwide news team, which interviewed the girls as part of its coverage of the march. The teens used their moment in the national spotlight to thank village members who made their trip possible.

On Monday they were still feeling grateful.

After working many hours this fall in support of the Hillary Clinton presidential campaign, both sisters were “devastated” by Clinton’s loss to Donald Trump in November.

“I was really a wreck,” Julia said.

Participating in Saturday’s march “most definitely helped me channel some of my energy,” Alaina said.

Even better, “it left me inspired,” she said.

“I definitely support women’s rights, but I also support all the other minorities. I support human rights. I was standing with everybody else who’s been oppressed.”

The completion of the march was an important beginning, not an end, she said. “This is a huge thing. We can’t just stop now.”

There is much that can be done, she said. “Even little things. In a classroom setting or a social setting, I’ll definitely be standing up (for everyone’s rights).”

Her sister, Julia, said she was equally inspired. “I think that the march was one of the best epxeriences I’ve had in my 15 years,” she said Monday. “It was extremely empowering.”

She continued: “I think that one of the things that amazed me most were the amount of people around the world who marched.”

“The biggest thing that I will remember is that at 15 years old, I could do something like that. … It was remarkable to so intensely to stand up for what I believe in. … I will never ever forget it.”

The girls’ mother, Wendy Ricks, echoed her daughters about the march’s inspirational impact. “It was just phenomenal,” she said. She is also grateful that her daughter’s bus tickets were provided. “It says a lot about Yellow Springs,” she said. “What a send off. What other town takes care of their neighbors and members like that?”

Wright noted that when they reached the march’s end Saturday, one of the girls asked: “Katie, what do we do next?” Wright replied: “Go back to the bus.”

“No!” the girl said. “What do we do next to keep this going?” Wright chuckled at the memory. “I was really proud of these girls.

Plans are in the works to keep the march momentum going. The Hoff sisters said they plan to participate in the “10 Actions/100 Days” campaign launched by the national march organizers (www.womensmarch.com).

The first action is a postcard-writing initiative, and a couple of women who went to D.C. already had scheduled a handful of writing sessions as of press time. The first was to be Wednesday afternoon at the library. Others are Saturday, Jan. 28, 8–11 a.m., at the Senior Center; Sunday, Jan. 29, 1-3 p.m., at the Emporium; and Monday, Jan. 30, noon-2 p.m. and 5-7 p.m., also at the Emporium. The purpose is to contact Congressional representatives about the issues that are important to the writers.

From preparation, to the march itself, to considering what comes next, march participants have felt the connection and support of community each step of the way. To paraphrase Hillary Clinton: “It takes a village.”