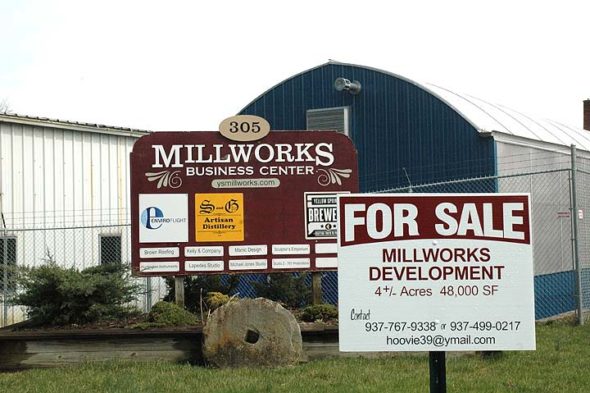 MillWorks on the market

MillWorks is up for sale. The four-acre industrial and office complex off Walnut Street along the bike path was put on the market March 7 by its longtime owners, local residents Rod and Ellen Hoover, Sandra Love and Sam Young. In an interview this week, the owners said they were simply ready to sell after 25 years of managing the property. And they anticipated little immediate impact from a potential sale on the eight businesses and individuals who presently rent space at MillWorks, most of them under lease.
The owners, two husband-and-wife teams, cited their own aging and shifts in business goals as factors in their decision. Currently at full occupancy, MillWorks is in a strong position, they said, so the time seemed right.

“We wish to leave it in good shape for the community,” Ellen Hoover explained.

The owners declined to disclose the selling price. “It’s negotiable,” Ellen Hoover said. They have had inquiries about the property, which is being offered for sale by owner, but no serious buyers have emerged in the first two weeks, she added.

Current tenants were notified late last year and given the opportunity to purchase the business complex, but none have opted to so far, according to Young.

The Hoovers, Love and Young bought the property, then three acres, at auction in 1991, with the idea of creating rental space for businesses in the village. The purchase price was $225,000. The deal didn’t close until a year later, however, due to environmental clean-up of the site, an old industrial property with significant contamination, according to Young. The property began as a cannery in the 1890s and became a seed company in the 1930s, he explained.

The site was largely unimproved at the time of the 1991 sale, so early on the new owners put in the current water, electric, sewer and gas lines. The original building lacked bathrooms, heat, even floors.
“It was a little rough around the edges,” Love said.

The owners purchased an additional acre over time, including the parcel that fronts Fairfield Pike and an area used for loading docks along the bike path, bringing the property to its current four acres.
Early tenants included businesses ranging from firetruck repair, soy products and plastic injection molding to Sam Young’s own former company, Young Concepts Inc., a resin casting operation. MillWorks has had as many as a dozen tenants at a time, and now has eight. All available space is currently filled.
“We don’t have a square foot to rent,” Young said.

Four of MillWorks’ current tenants have been on site for at least 20 years, according to the owners. These long-term tenants include Grey’s Earthworks, an excavation business; Michael Jones’ ceramics studio; Huntington Instruments, a scientific instruments business; and Sculptor’s Emporium, an art supply business.

Three businesses, EnviroFlight, Yellow Springs Brewery and S and G Distillery, got their start at MillWorks within the past several years. EnviroFlight was founded by local resident Glen Courtright in 2009 to develop fish and animal feed from black soldier fly larvae; the company was purchased last year by biotechnology company Intrexon, but remains in Yellow Springs. S and G Distillery was started by Meg and Steven Gujer of Sugar Creek Township and Hajo Scheuner in 2011 as a local craft distillery. And Yellow Springs Brewery was launched by villagers Nate Cornett and Lisa Wolters in 2013 as a local craft brewery. It has since acquired additional space at the old bowling alley in the south part of the village.

All three of these tenants are on long-term lease, with up to five years left on their leases, and should see few changes as a result of any sale of the complex, Millworks’ current owners said.
Lisa Wolters, co-owner of Yellow Springs Brewery, said she was unconcerned about the sale. “We knew this was coming for some time. We’re not making any changes because of it,” she said Monday.

As a 48,000 square-foot complex with several thriving local businesses, MillWorks is critical to the local economy, contributing to the local tax base and offsetting utilities costs in the village, its owners said. And the complex provides space for local businesses and light manufacturing companies to operate in a village that has few such spaces, they added.

“My hope is that MillWorks continues as it is now,” Yellow Springs Chamber of Commerce Executive Director Karen Wintrow said Monday.

While existing buildings are full, the lot fronting Fairfield Pike could be developed by a future owner. “We’ve always seen that as the gateway,” Rod Hoover said.

The Hoovers, Love and Young said this week that they’ve enjoyed their run as owners and managers of the complex. MillWorks has produced a good income, contributed to the economic vitality of Yellow Springs and enriched their lives through relationships with local business owners.
“We’ve had really good tenants,” Rod Hoover said.

In earlier years, they had potlucks and parties with tenants, celebrating Christmas and other holidays. And they’ve worked hand-in-hand with several businesses, including EnviroFlight and Yellow Springs Brewery, to configure space and share costs on improvements to meet tenants’ evolving needs.

Now the Hoovers, Love and Young seek a buyer, ideally someone from the local area, to steward this key piece of the Yellow Springs business landscape. The two couples said they are not in a hurry to sell, and are willing to wait for the right future owner.

“Our goal is to find a buyer to nurture it as we have,” Ellen Hoover said.