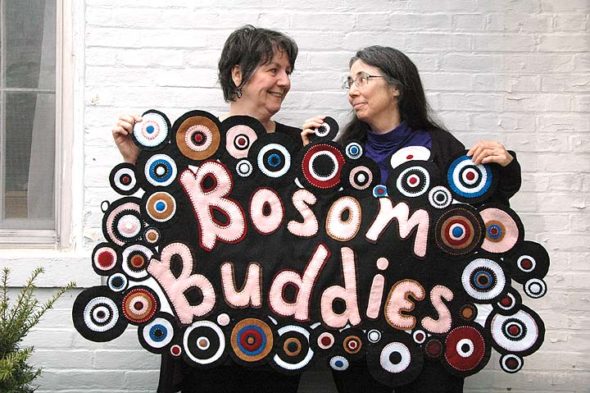 A new Yellow Springs Arts Council show, “Bosom Buddies,” opens on Friday, April 21, with a reception from 6 to 9 p.m. The show was inspired by the art created by Corrine Bayraktaroglu and friends during her bout with cancer. Other community members are invited to submit to the show art that’s linked to breast cancer. Shown above are Bayraktaroglu and her good friend, Nancy Mellon, who together are known as the JafaGirls. (Photo by Carol Simmons)

Friends use art to confront illness

The “everything” in this case is breast cancer.

Diagnosed on Jan. 21, 2016, following a suspicious mammogram, Bayraktaroglu turned to her friends as well as her art for support. And the response produced some unexpected results, many of which will be displayed as part of an art exhibition scheduled April 21–May 14 at the YS Arts Council’s Community Gallery.

Sitting with cups of hot tea and a plate of chocolate chip cookies at Mellon’s house on a recent rainy morning, the two women — who as the JafaGirls have created a variety of public, textile art installations — talked about their friendship and the medical treatment and art-making that followed Bayraktaroglu’s breast cancer diagnosis. All of which will be represented in the YSAC show they are calling “Bosom Buddies.”

Bayraktaroglu’s experience is at the center of the show, but the experience of her loved ones also play an important part — just as they did throughout her treatment.

She counts herself “lucky” that she did not require chemotherapy. She did, however, go through six weeks of daily radiation treatments prior to surgery. She is now considered “clear” of the cancer.

She learned quickly that “people want to help, but they don’t know how to help. And I didn’t really need more food,” she said. Thinking of the yarnbombing projects she and Mellon had undertaken, where they wrapped trees with swatches of knitting or hung yarn creations from various objects, she asked friends to make “boobs” for her.

“I wanted something that would make me smile, and would make them smile,” she said.

Her friends “were delighted to be given a joyful way to help,” Mellon said. And the boobs rolled in. Friends, friends of friends, anonymous strangers, all delivered. “She was getting boobs through the mail,” Mellon said.

Bayraktaroglu, 61, recounts how one day, when her husband, Burhan, “went out to the mailbox and pulled out a box of boobies — and we’re taking a lot of boobies — someone drove by and threw some boobs out the car window and said, ‘Here’s some boobies for Corrine.’” She said her husband came inside and asked with a sigh, “Corrine, must you take this way to deal?”

She chuckled at the memory.

Bayraktaroglu’s request produced boobs of various shapes and sizes, some more abstract, all ranging in color and materials. Some were of felt, some were knitted, some crocheted, some made of plastic. She and Mellon hung them from the trees that lined the front of her yard. “It was wonderful,” Bayraktaroglu said. And many will be on display at the Arts Council show.

What’s more, “all through my experience, I was drawing and painting,” she said. The exhibition also will feature some of those works, including a collection of painted stones. Bayraktaroglu said that each day of her treatment, she would take a small stone from the doctor’s parking lot and paint an image that represented her thoughts or feelings that day. The results reflect her whimsical side as well as some of the fear, grief and anger she experienced.

Painting the stones “gave me a focus when I got home,” she said. “No matter how fatigued I got, I would take my cup of tea and paint.”

She said she is a strong proponent of expressing all feelings that arise throughout treatment and has no patience for those who insist on promoting only positive thoughts. “I call it the tyranny of positivity,” she said.

For Mellon’s part, she wanted her friend to have what she needed. Her involvement as a caring friend also included personal art-making, in addition to the boob project. “This was the second time I’ve had a dear friend with breast cancer.” She said the other woman also was an artist who stressed “how much it meant to her to do art” throughout the experience.

While a cancer diagnosis is a profoundly personal, even solitary, experience, it deeply affects loved ones, and the two friends wanted the YSAC show to include that aspect of the experience. The exhibition is meant to show how a diagnosis of cancer affects not only patients, but also friends and family. As such, the public is invited to participate with contributions of art, mementos, poetry, pictures and stories that will go in a sharing space in the gallery. Cancer of any kind will be included. Works by some invited artists whose lives have been touched by cancer also will be featured in the show.

Among the pieces will be a photograph of villager Susan Gartner, who is currently going through her third round with cancer. The picture shows Gartner, hairless from chemotherapy, with her bald head painted like a canvas. She said she had her head painted five or six times before her hair grew back, and the images changed with the artists — from a fanciful warrior headdress, to Vincent van Gogh’s Starry Night to abstract designs. Anticipating the imminent loss of her hair once again, she said she wants to repeat the project. “We’ll have a whole new art gallery on my head,” she said.

The station manager for the local access channel, Gartner said her personal art form is video, but she loves making her head a changing canvas. “It’s an ice-breaker. It lightens the mood. It makes people laugh instead of being scared.”

It offers the same for her. “You hear ‘metastasized cancer,’ what exactly does that mean? It’s a very easy, very short trip to think about the very depressing aspect of what I’m going through,” Having her head painted “is very playful, very tangible —- a way of connecting with my community and not in a depressing way, but in a fanciful and laughing way.”

“A lot of what the show is about is comforting yourself, comforting others,” offering a space to share, Mellon said. “It’s a conversation, with everyone hopefully talking.”

Cancer is an awful experience. Frightening, painful, hard. And nobody wants to be defined by the disease, Bayraktaroglu said. Making art helped her hold on to her own definition of herself — as an artist and a friend. And in that space there was also room to smile and even laugh.